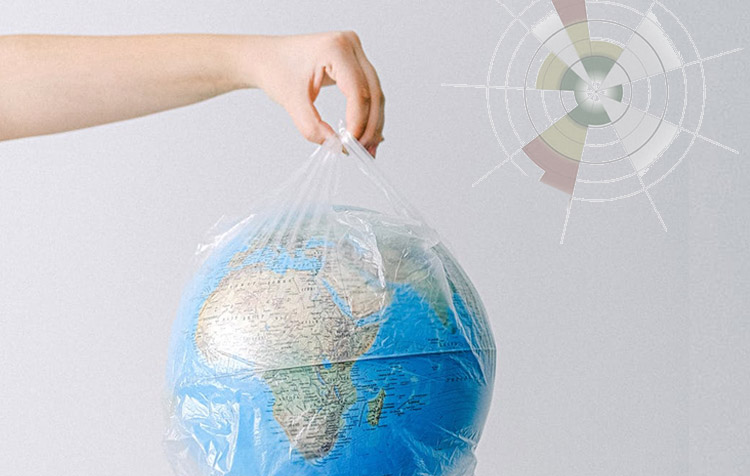 Planetary boundaries - About the carrying capacity limits of the earth

What are planetary boundaries, anyway? You've probably heard this term in the news, on political talk shows, or at one of the many climate rallies. It describes the stress limits of the Earth, whose resilience is determined by nine different global processes. We humans are being pushed to the limit by the massive consumption natural resources and a generally environmentally harmful way of life are largely responsible for the fact that our planet is more than ever in danger - and must therefore now find solutions for the biggest environmental problems of our time find

In this article, I want to tell you everything you need to know about the concept of planetary boundaries and show you which processes play an essential role in it. Let's go!

In advance you can find a short overview of the article here:

The definition - What are planetary boundaries?

The concept of Planetary Boundaries is used to identify nine key natural systems and processes, Statements about the earth's health and the livelihood of mankind to be able to meet. It was launched in 2009 by around 30 international scientists led by Johan Rockström of the Stockholm Resilience Centre published in a technical article.₁ The global processes and their current state, on which the ecological carrying capacity of the planet is essentially dependent, were determined on the basis of scientific knowledge and by applying the precautionary principle.

How is this different from climate tipping points and Earth overload day? While the Planetary Boundaries represent a dependency concept for assessing Earth health, the Climate tipping points important elements of Earth system research that have an accelerating effect on global warming beyond a certain point. The "Earth Overshoot Day. describes the day in a year when humanity has consumed more renewable resources than the planet can reproduce in the entire year.

What are the planetary boundaries and determining global processes?

Now you know that the scientific concept of planetary boundaries shows how well or badly our earth is doing. Now I would like to explain to you exactly which earth-systematic processes are involved.

Notice: In each case, I also introduce you to the main causes of the problem and the things each of us can do about it in our everyday lives.

The rise in sea levels, prolonged periods of drought, or Extreme weather and natural disasters are increasing consequences of climate change. The anthropogenic Greenhouse effect and Tipping Points, such as the collapse of the Amazon rainforest or the destruction of coral reefs, are accelerating the environmental problem of the global warming.

Toxic substances such as Pesticides, heavy metals, radioactive materials or Nanoparticles can only be degraded with difficulty in nature. This is another reason why their introduction into the environment can have severe consequences for humans, animals and the earth. For example, new genetically modified life forms can form that are capable of upsetting ecosystems from their natural balance.

3. Intactness of the biosphere

The integrity of the biosphere is also a critical process of planetary boundaries. Within habitats, countless species of animals and plants are interdependent. For example, if plant-pollinating insects die like the bee, many plant species and foods will no longer exist.

In the stratosphere there is Ozonethat blocks parts of the UV rays from sunlight. But some industrial gases can damage the ozone layer, causing unusually large amounts of ultraviolet radiation to reach the earth.

The aerosols, tiny particles in the air such as. Fine dust, influence the climate system, the weather and also our health. Altered cloud formation or respiratory diseases are common consequences.

The forest is able to cool the earth and bind CO2 emitted by humans. The enormous land consumption for meat and others, animal food however, leads to forests having to give way. The safe action area of this process has already been clearly exceeded, so that there is an increased risk of serious consequences.

Seeing another Planetary Boundaries process Johan Rockström and his team in changing biogeochemical cycles. Nitrogen and phosphorus are found naturally in the soil. Through the Application of chemical fertilizers however, the existing quantities increase exorbitantly. Surpluses are washed by the rain into surrounding lakes (eutrophication), in which algae growth increases alarmingly and threatens ecosystems.

8. acidification of the oceans

Among them is the Decrease in the pH value of the seawater to understand. Calcite and aragonite react in seawater with the carbon dioxide bound in the sea. The resulting carbonic acid subsequently attacks mussels, for example, and can accelerate coral death.

Water is not only consumed directly in the household, but also indirectly, for example for food and clothing. This Virtual water consumption arises, for example, from the irrigation of tomato or cotton fields - and threatens the limited freshwater resources in ponds, rivers and lakes.

What is the state of the Planetary Boundaries?

Here above in the graphic you can already see the respective Conditions and threats of the global processes of planetary boundaries just described.

Processes, which here are exclusively in the green (range recommended by Rockström and colleagues) are (still) considered safe or healthy. This is currently the case for freshwater use, ocean acidification, and stratospheric ozone loss.

Climate change, as well as land use changes, are currently already in in the yellow range, which describes processes that pose an increased risk and whose consequences for the environment are difficult to assess.

The biogeochemical cycles, as well as the genetic diversity (as part of the process of the biosphere's integrity) are located in the red rangewhich applies to global processes that are in the high-risk zone in relation to the Earth's stress limits. This means that a threatening number of animal and plant species are currently becoming extinct - also as a result of the Incorporation of chemical fertilizers.

We should not disregard the gray areawhich describes the processes whose load limit is not yet even known and defined. This is the case with the aerosol content of the atmosphere, the introduction of new substances and modified life forms, as well as functional diversity (also as part of the intactness of the biosphere).

Our current way of life is depleting the planet's resources and destroying natural ecosystems - but the Earth is not infinitely resilient. The Planetary Boundaries concept combines the Interactions of the global processes and gives Revealing the state of health of our earth - and us humans a framework to keep our environment intact. It also provides valuable insights that motivate us to adapt our personal behavior so that we ourselves can become part of the problem-solving process.

Do you have any questions, suggestions or further valuable information about Planetary Boundaries? Then I look forward to your comment.

PS.: In the Knowledge blog I present you many more Technical terms from the fields of environmental protection and sustainability in front of you. Find out now, for example, what is meant by the term Littering understands. Have fun!