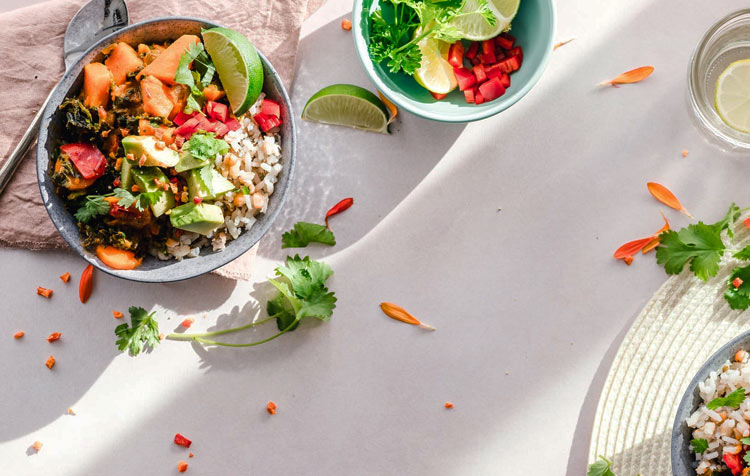 Do you actually know the typical Prejudices against vegans and their way of life? In the meantime, the topic of veganism has arrived in our society and almost everyone knows one or the other vegan. Nevertheless, there are still many vegan prejudices and misconceptions that I personally encounter in everyday life.

In this article, I would therefore like to address and debunk the most typical clichés about veganism. So that you too can form a more informed opinion about a diet that many Environmental problems of our time can solve.

Tip: At Vegan Blog you regularly get the best tips around the vegan everyday life. Take a look.

These prejudices against vegans are typical

Let's best not waste any time. Whether dangerous half-knowledge, myth or cliché - these are the most common prejudices against vegans that I hear in everyday life.

Of course, if you are on a vegan diet, you should give some a few thoughts about how to cover your nutrients. On the other hand you should do the same with a mixed-food diet, because just because you consume you are consuming meat, dairy and eggs, you are not getting all the nutrients you need. nutrients.

Protein in particular is often cited as a potential deficiency nutrient because many people don't know that protein is also found in plant-based foods. How it works as a vegan with the protein, you will learn in the article Cover proteins vegan.

Vegan prejudice number 2: You can hardly eat anything as a vegan

There are a variety of edible plants. The only thing that limits your vegan food options is your own imagination. I have been introduced to so many new and delicious foods since I started eating vegan. My diet has been more creative, varied, and healthy since then, and that even Without substitute products.

You just have to look for the alternatives a little bit and then you find them all by yourself. In the past, when I was vegan diet, I didn't notice how many different plant-based different plant drinks and other substitute products there are. Only since my I became aware of how much you can actually eat as a vegan. can eat.

Vegan prejudice number 3: Vegan is much too expensive

"I can't afford that!" is a statement I hear more often. But vegan food doesn't have to be expensive: pasta, rice, potatoes, legumes, regional Vegetables, etc. are really cheap food. In comparison, meat and cheese are incredibly expensive.

Surprisingly, the statement "plants also have feelings" is heard again and again. However, purely scientifically, plants are not able to feel pain, because they have no central nervous system, no pain receptors and no brain. Of course, plants live and are partly capable of amazing things, like aligning themselves to the sun. However, plants always behave reactively, i.e. they respond to a stimulus, such as sunlight. However, the plant is not aware of what it is doing, i.e. plants have no consciousness.

Even if plants had a sense of pain and consciousness, it would still be better to eat a vegan diet: It takes up to 16 kg of plant feed to produce 1 kg of meat. Thus, even more plants would suffer if you eat meat. But this is only hypothetical, because plants don't feel pain anyway. If you want to learn more about calorie balance and sustainable nutrition, feel free to have a look at my article Shape nutrition sustainably over.

Vegan prejudice number 5: Animals do not die for eggs and milk

I also used to think that vegans were exaggerating, what's wrong with eggs? The cows and hens are doing well, but is that really so?

Male chicks are a byproduct in the egg industry. And since male chicks are useless to the industry, that's exactly how they are treated: shortly after hatching, on the very first day of their lives, the Male chicks thrown into industrial meat grinders and shredded or gassed alive. This is a common practice for caged, free-range and organic eggs.

Laying hens have a natural life expectancy of up to eight years. However, since their laying performance decreases rapidly, the hens are slaughtered after only 1.5 years. This also shows how much industrial animal husbandry is geared towards profit.

Cows have an average life expectancy of 20 years if kept in a natural environment. However, cows in the dairy industry rarely live more than 5-6 years, because after that they are exhausted, their production decreases and therefore they are slaughtered.

Tip: For inspiration on vegan substitutes, check out my post 13 vegan alternatives for animal products.

One argument that is supposedly against veganism is the fact that rainforests are destroyed for soy. The effects of soy cultivation in South America have devastating consequences for the rainforest, of course, however about 85 % of the soybeans grown there are used as the basis for feed in (mass) (mass) livestock farming. Many companies that manufacture tofu or soy drinks make a point of using soy from the EU.

Due to the increasing consumption of meat, more soy is needed as animal feed. To meet the increasing demand, rainforests are being cleared and used as cultivation areas for soy. So if you care about the rainforest, reducing your meat consumption is a particularly important step.

Misconception about soy on our plate

By the way, genetically modified soybeans are not approved as food for the end consumer in Germany, but only as animal feed.

Here's another interesting comparison: from one kilo of soybeans you can make about two kilos of tofu. If you use the same amount of soy as feed for pigs, you only get 300 grams of pork.

Tip: For more info on how our meals are linked to environmental problems, you can take a look at the article Nutrition and climate throw

I hope that I could clear up a little further with the usual clichés, to which one is exposed as a Veganer up-to-date still.

In keeping with the theme of vegan prejudice, I recommend that you read the Book Vegan cliché adé by Niko Rittenau. Niko describes in the book clichés about vegan nutrition and describes there in a scientific but entertaining way how to create a healthy and varied vegan diet.

For more info and a good start into the vegan everyday life I recommend you my article Vegan living - tips for vegan start.

If you know of any more vegan prejudices and have a glib answer ready, feel free to leave a comment!

PS.: We also have a Statistics articles about veganism for you. There you will learn more about the development of vegan nutrition in our society through facts and figures.