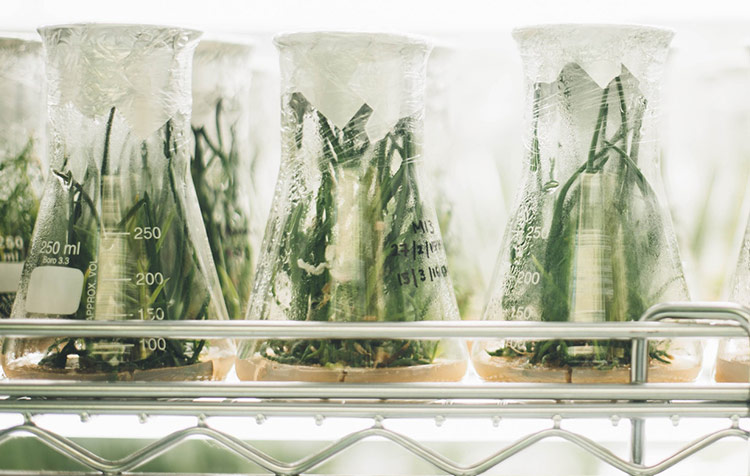 What useful and promising alternatives for plastic are there from research? This question not only concerns scientists, but also, for example, us consumers, retailers and, of course, environmentalists. After all, anyone whose heart beats for sustainability senses when they see the Plastic masses in the environment and the further consequences of the plastic at least a short interruption of his ECG. So it's time to look at what material could replace plastic in the long term.

Therefore, in this article you will now learn everything about the best already existing and also future Plastic Alternatives from research.

Why do we need plastic alternatives from research?

Before we get to the six alternative materials as plastic replacements, we need to briefly justify why so many people are longing for a meaningful alternative in the first place.

These are the reasons that drive us the most:

In the article about the Plastic disadvantagesI have explained the problems caused by plastic in more detail. More important now, however, are the alternatives to plastic that science is providing us with.

What are the plastic alternatives from research?

Now let's take a closer look at which material is actually capable of replacing plastic in a meaningful way. Because also the Plastic advantages we do not want to conceal. Indeed, the suitable material must be similar light, heat insulating, heat resistant, pure, flexible and above all cheap but also natural and biodegradable be

Phew, not so easy, is it? Research currently holds out the prospect of the following plastic alternatives.

Many alternative products made from sugar cane are already available today. These range from plastic bags to disposable plates. The material is made from the fibrous Remains of sugar production. Sugar cane is often used as an example of the so-called Bioplastics used that nowadays still has to reap a lot of criticism.₃

Even though plastic made from sugar cane helps to reduce CO2 and also enables simple disposal, fields with sugar cane must of course be cultivated. This consumes diesel, for example, and also fertilizers, which in turn can pose a threat to the surrounding ecosystem.

This alternative for plastic provided by research is therefore currently not yet a suitable replacement for conventional petroleum-based plastic.

A fungus can also be a suitable alternative for plastic from research. It is called Mycelium (or also Mycelium) and basically refers to the totality of all filamentous cells of a fungus. The more densely the filaments are stored, the more clearly they can be seen even with the naked eye. Incidentally, they are found in almost every square centimeter of the earth's soil and provide a very flexible material. Researchers have already been able to use them to make bricks or lampshades, for example.₄

For their growth, the fungi need only water and a constant supply of carbon. During production, you first get a kind of wet glue, which after drying becomes a stable and resilient material.

Even though mycelium is particularly suitable as a packaging alternative for plastic, it can also be used to make very good sustainable leather produce, as is the case, for example MycoWorks is already demonstrating.

Side note: There is even a fungus that can eat petroleum-based plastic. Pestalotiopsis microspora it is called and grows, for example, in the rainforest of Ecuador.₅

U.S. researchers have developed a plastic alternative made from milk proteins that is lightweight, biodegradable and even edible. For the development, the milk protein Casein that significantly contributes to a longer shelf life of the food packaged in it. In principle, therefore, milk protein already offers the chance to extend the Reduce food waste.

Since the packaging is also edible, another advantage arises, for example, for the storage of soups. This could simply be thrown into a pot together with its contents and cooked. According to research, however, the major disadvantage of this plastic alternative is that it is no longer sufficiently water-repellent at higher temperatures. It will therefore be some time before we can speak of a genuine alternative material for petroleum-based plastics.₆

Basically, this alternative for plastic refers to the use of Strengthsuch as from corn or even potatoes.

The production of such bioplastics results in polylactic acid (PLA). The plant starch is converted into a polymer by the process, so that a plastic product such as a plastic bag is made from it. Visually, the products are hardly distinguishable from conventional material, which is why a label such as "biocompostable" is often affixed to them.₇

The advantages of this plastic alternative from research include, for example, that no toxic chemicals are used in the manufacturing process and that these can therefore not be transferred to our food. Allergies are also eliminated, as the allergen profiles are lost during the manufacturing process. The disadvantages are, for example, that plastics made from corn starch are less heat-resistant and also do not decompose quickly enough to simply dispose of products made from them in the compost.

Yes, that's right! Even from the algae, which and when swimming in the sea usually rather disturb, you can make a plastic that resembles the plastic we know. The material is then biodegradable and even edible. With the help of the so-called Spherification a kind of natural shell or waterproof skin is formed, through which you can store liquids. The advantage over conventional plastic bottles is mainly that no toxic pollutants such as. Microplastics can pass into the beverage. The algae also have a short and high growth rate and are also relatively undemanding in cultivation.₈

The British StartUp Ohoo is said to have invented this type of packaging. The German fast food chain Nordsee is also working intensively with researchers on an algae-based alternative for plastic.

If research can produce a sustainable plastic alternative from algae that is ready for series production and, above all, edible, this would be an important step. Because then the algae would not have to be recycled at great expense or burned with little technical means.

Hemp could actually be a much more significant alternative for plastic. The research is already very far here. From strands of the plant one removes the hemp fibers and remains about 77% Cellulosefrom which plastic is already being made today.

The resulting material looks like ordinary plastic and is also very light. The big advantage, of course, is that plastic made from hemp is biodegradable. The plant grows very quickly and also binds CO2 and thus helps at the same time to Stop climate change.

However, the cultivation of industrial hemp is still prohibited in many parts of the world, which is why there are still very few products and alternatives with plastic made from hemp.

The most important thing about this possible plastic alternative from research beforehand: I am not advocating it, but only presenting possible alternatives. Plastic from the shells of crustaceans is of course fundamentally against a sustainable, vegan lifestyle.

For this plastic alternative are used smallest amount of Chitin from the crab shells combined with cellulose from trees and a film made of lactic acid plastic. Researchers have already made a cling film from it that can be used for example Food longer shelf life could make than usual cling film. (see this article of the world)

According to researchers, chitin can be obtained as a waste material from the shellfish industry. The plastic alternative would then be biodegradable in any case. However, it remains questionable whether a mass-produced plastic can actually be made in this way.

As you can see, there are many good approaches that give hope for the ONE ideal alternative for plastic. However, it is not yet fully developed, which is why a little patience with research is still required.

Basically, with bioplastics there is also always the danger that people will dispose of something in the environment because they think it will decompose. So here, too, caution is advised until you praise a material to the skies.

Until the replacement material has been found, our only option is to use as much live plastic free and avoid the garbage as much as possible.

Have you made your own experiences with plastic alternatives or do you have any questions or suggestions regarding this article? Then feel free to leave me a comment.

PS.: If you want to know more about the waste-avoiding Zero Waste Lifestyle then I can give you my Online Course 30 Days To Zero Waste to the heart.