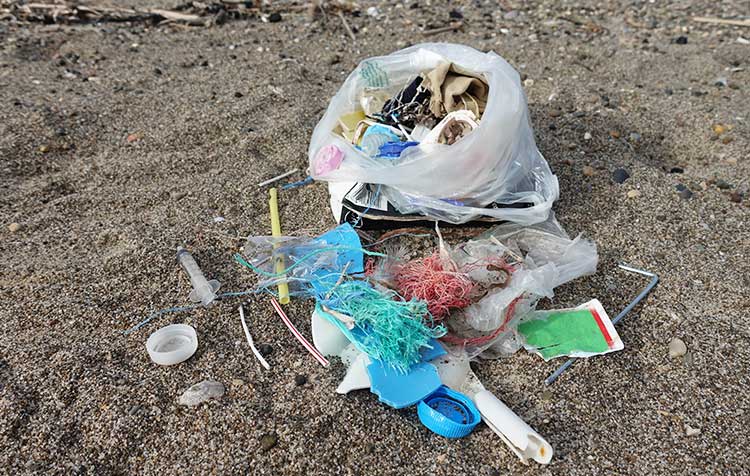 The Plastic Waste Environment & Nature is destroyed, everyone should be aware of this. Plastic here - plastic there. No matter whether we are at the seaside, in the city or in rural areas. As a rule, we find plastic waste everywhere. This small piece of plastic waste, which seems harmless to us at first sight, is a disaster for the environment and its living creatures in total. Plastic waste is everywhere and sooner or later it ends up in the sea. The problem: plastic does not rot.

Tip: At Plastic waste statistics I have compiled all the important facts and figures about this environmental problem.

Consequences of plastic waste for the environment & wildlife

According to the Nature Conservancy's studies, up to 100,000 marine mammals and one million seabirds die each year from the plastic trash we leave in our environment. At the moment of throwing it away, most people simply don't realize that minutes later, this trash will be in the stomachs of seabirds or other animals. There the Plastic (lighters, plastic bags, plastic lids, etc.) cause fatal injuries and blockages. Sea turtles are also very vulnerable to the plastic waste. They mistake floating plastic bags for jellyfish and eat the plastic. Fish especially mistake the Microplastics with natural plankton.

In this way, the plastic also enters the food chain. As you will see in the following pictures, many animals suffocate or starve to death from the plastic waste they think is food. The animals starve to death even though their stomachs are filled. And it's with plastic garbage that doesn't decompose. The plastic prevents the animals' digestive systems from functioning. A study of fulmars showed that these seabirds have an average of 27 plastic components in their stomachs. It is predicted that by 2050, at least 95% of all bird species will have plastic detectable in their stomachs. What is true for bird species in this statistic is also true for all other animal species.

The image of the seal, caught in one of the many ghost nets (lost nets of fishermen) in our seas, needs no further explanation. Without help, this seal would have starved to death in agony. In addition to ghost nets, however, all other types of marine debris are dangerous to the seal. Plastic waste has devastating effects on the ecosystem. Especially larger marine animals are threatened by the garbage. Who was not aware of the problem of plastic waste yet, will hopefully see the light after the following picture at the latest. This turtle must have been stuck in this plastic ring since it was very young. Its body could not resist against the plastic, so that it came to this development. Since plastic does not rot, the turtle has carried the plastic around with it for many many years. For me personally, the picture is one of the pictures that have changed my attitude towards plastic (see Christoph introduces himself) have changed fundamentally.

Plastic waste is everywhere in the environment, persists and is added to by about 32 million tons a year. Unbelievably, we just let this happen and countermeasures are implemented far too slowly. We continue to saw the branch on which we sit.

The plastic waste in the sea and rivers

In the following I would like to give you some more information about plastic waste in our waters:

Plastic particles have also been detected in rivers worldwide. Microplastics (smaller than 5 mm) from toothpaste, shower gel and the like enter rivers through wastewater. This is because wastewater treatment plants are still unable to filter out the microplastics. Germany alone has rivers with a total length of over 400,000 km. Our rivers transport the plastic waste all the way to the sea. On the subject of microplastics from cosmetic products I have here another detailed article written.

Plastic waste in the sea

Experts estimate that there are about 300 million tons of plastic in the sea in 2017. Every year, another 8 million tons are added. The 300 million tons remain. Because plastic does not decompose. By 2050, there could be 3x as much plastic in the ocean as there are fish. Since the plastic components are eaten by fish, the plastic enters the food chain and eventually ends up on our plates again. The plastic waste in the ocean ranges from plastic bags, buckets, water bottles, disposable razors to lighters and toothbrushes. Salt water and sunlight cause the plastic to break down very slowly, so it takes at least 450 years for a plastic bottle to decompose. But then the plastic is not gone, it has dissolved into many small individual microplastic components and is eaten every day by fish and other marine animals.

Plastic waste on the surface of the sea

According to information from UNEP (United Nations Environment Programme), there are about 18,000 pieces of plastic of various sizes floating on every square kilometer of the ocean surface. Particularly noteworthy here are the plastic waste whirlpools. Experts have analyzed ocean currents and identified particular agglomerations of plastic waste in the sea. There are six such waste whirlpools in our oceans. The largest Garbage whirlpool in the sea is the "Great Pacific Garbage Patch", which reaches the size of Central Europe. At the ocean surface, about 15% of the total plastic waste is believed to be floating in marine regions, with another 15% washing up on beaches.

Plastic waste on the seabed

Plastic waste in the deep sea

We go one step further. Marine biologists have also studied the plastic components in the deep sea. The result: plastic waste in the Arctic deep sea has increased sharply. Even if we humans only appear sporadically in this area, the Arctic is also becoming increasingly littered. Here it is important to observe the results of the next few years.

How long does it take for trash to decompose in the ocean?

Plastic waste in the sea decomposes very very slowly into smaller microplastics due to the salt water and other factors. For example, the plastic bottle that someone threw into the ocean is there for at least 450 years until it decomposes to some extent. A plastic bag is a little thinner, taking about 10-20 years to decompose in the ocean. Time enough to be mistaken for food by turtles or other marine animals. Cups made of Styrofoam or food cans decompose into microplastics in about 50 years. That's half a century! Cigarette butts end up in the water very quickly. It also takes one to five years for cigarette butts to decompose. Everyone must be aware of this long period of decay of waste in the environment or in the sea. Really everyone!

In order to protect the oceans, the Nature Conservancy provides us with this flyer "Protect the oceans - tips for everyday life". free of charge. Read it very briefly and learn for life.

What we all need to do about plastic waste in the environment!

We all need to change our thinking so that plastic waste doesn't get into the environment in the first place. Plastic does not decompose, kills animals and also harms our health. By consciously plastic-free or at least plastic-free lifewe help ourselves and also the environment in which we live. Please read immediately afterwards this article about plastic free living through and learn which plastic products you can remove and replace directly from your everyday life. Register here briefly and every week I'll show you a few plastic items from your everyday life that you can swap out right away. You can also join our worldwide Beach CleanUp group on Facebook and your own Beach Cleanup share with the world.

As far as the existing plastic waste in the environment is concerned, we are only left with Support existing projects and become active themselves. The picture shows the beach cleaning on Rügen, which is necessary but also very expensive. Every year the cleaning of beaches and coastal areas costs millions of euros. The Nature and Biodiversity Conservation Union regularly organizes relief actions to remove plastic waste. Once a year, the "Coastal Cleanup Day" also takes place, where you can meet many like-minded people. Meanwhile, many startups are also taking care of the elimination of plastic waste in the oceans. The best example is the young Dutchman Boyan Slat. With "TheOceanCleanup" he wants to collect the plastic on the entire surface of the oceans of our earth within 5 years starting in 2020.

I feel that the issue of plastic waste is becoming increasingly important in our society. Let's work together to make sure that everyone is aware of the plastic problem.

PS: Do you already live without plastic? I'll show you how you can now simply live plastic-free you can. I also look forward to your joining our Beach CleanUp worldwide group on Facebook. Have fun!