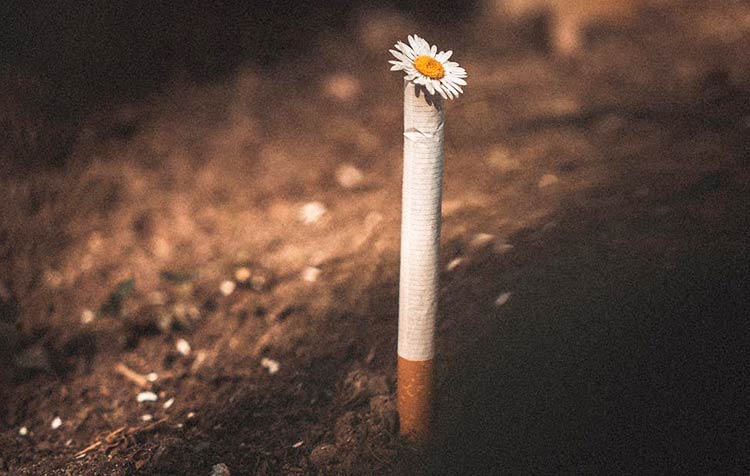 How cigarette butts harm the environment

Before we get started, here's a little Table of contents:

Why you should not throw away cigarette butts

Okay, that's quite a few cigarette butts, but the cigarette butts rot totally quickly! That's exactly what I used to think. However, I had to learn that this is unfortunately not the truth. Cigarette butts consist partly of cellulose, which can be decomposed only slowly. Throwing a cigarette butt into the environment is therefore more harmful and long-term than you might think at first. It is particularly bad to throw cigarettes into water, i.e. into the sea, rivers and lakes. A single cigarette is capable of contaminating several dozen liters of water₃. For fish and other underwater inhabitants, this means an agonizing death. See also the article, Plastic waste in the environment.

The best thing, of course, is to give up smoking altogether 😉 But since many of you certainly can't imagine that, I'll tell you here some ways to smoke as environmentally friendly as possible.

Do you smoke several packs a day? The following tip sounds very simple. It is. However, it is often underestimated. If you start smoking less, it's not only better for your health, it's also a great benefit for the environment! Even one less cigarette a week helps make the environment a little better. If the occasional smokers would follow suit and all smokers in Germany would smoke one cigarette less per week, about 88 million cigarettes would be spared to the environment and living beings. So by reducing your cigarette consumption, you're doing more than you think.

There is only one proper place for cigarette butts: the residual waste. Some may be convinced that the ash from cigarettes is good for the environment and garden and therefore use cigarette ash as fertilizer. However, this is nonsense! Cigarette ash contains just 1 % of potassium, which doesn't make it a very good fertilizer. In addition, the ash contains many pollutants that are bad for the soil. Once it gets into the soil of the garden, you can't get the pollutants out. So ashes should not be used as fertilizer, nor should cigarette butts be thrown away in organic waste. The ash belongs together with the cigarette butt in the residual waste.

Even on the road with cigarettes environment does not harm

To protect the environment, you can also take a small can, so that the environment and nature are not polluted by the cigarettes. Since each of us sometimes stays in places where there are no trash cans, the temptation to simply flick the cigarette butt somewhere is very great. Here, however, it is more environmentally friendly to put the cigarette butt in the can you brought with you instead and empty it later. Small flat cans fit not only in any handbag, but also in any trouser pocket.

Roll your own cigarettes

If you decide to roll your own cigarettes, you can do the environment a big favor. OCB rolling papers are especially recommended. They are made entirely of hemp, which is good for the environment. (Here you can find OCB leaves from hemp)

Also these filters from OCB* are environmentally friendly. As an alternative to the conventional cigarette offers this natural tobacco* which is 100% free of nicotine. It is made from natural plants like lavender.

Finally, I would like to introduce you to an exciting project. Greenbutts is an interesting start-up company that has made it its mission to create filters that can be broken down more quickly without leaving behind toxic substances. The filters are made of natural materials such as hemp and cotton. According to the manufacturers, it should only take a month to break down the cigarettes. There is also an extra benefit: the Greenbutts contain seeds, which are capable of thriving in soil. The company clearly urges consumers to always dispose of cigarette butts properly, even if they are sustainable. On the earth, one should not throw away these cigarette butts either. Nevertheless, if a butt did end up in the environment, one would know that it would degrade quickly. When the Greenbutts come on the German market, is unfortunately not yet completely clear. The company is still quite young. But I think the idea behind it is great in any case and will continue to keep an eye on the start-up. If you would like to learn more about the topic, you can visit the official website of Greenbutts get more info 🙂

Being environmentally conscious despite smoking - Is that possible?

My answer is yes, you can definitely do that 🙂 Even though some of us don't want to give up cigarettes in our daily lives, everyone can still work towards a greener and cleaner planet. For example, as you can see, rolling your own cigarettes is a great way to help protect the environment. Also, reducing (even minimally) the amount of cigarettes you smoke every day really helps a lot more than you might think at first. But the best solution is still such a Pocket ashtray for on the go.

I think it's great that more and more people are choosing to be more conscious of the planet. Together we can achieve a lot!

PS: For more great tips on how to live more eco-consciously without plastic, check out this article Plastic Free Living - Tips & Tricks.