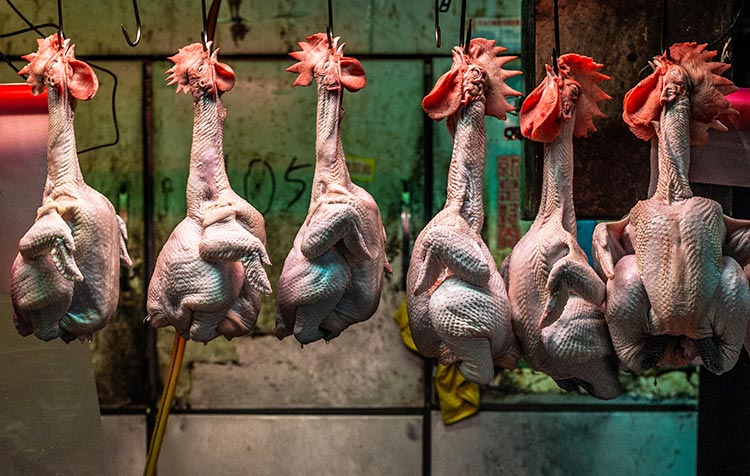 Carnism - The Psychology of Eating Meat

What is meant by carnism? Admittedly, the term has not been around long at all. But it describes quite accurately the exploitative system of eating meat, which I myself unconsciously appreciated for almost 30 years of my life and also promoted through my shopping behavior. Only when the background of the meat industry and the real reasons for my meat consumption leaked out to me, I started to question the system "meat", as well as the psychology and ideology behind it.

In this article I would like to give you all the important information about the ideology and psychology of eating meat.

In advance already a short Overview about the contribution:

What is meant by carnism?

The carnism (carne = meat) is a invisible belief system that conditions us from an early age to eat certain animals. It is, so to speak, the psychology of meat consumption, which is deeply rooted in our society, in our beliefs, norms and convictions, and which significantly influences our behavior.

The opposite of carnism, which incidentally got its name from the American psychologist Dr. Melanie Joy, is veganism. It is the way of life that tries - as far as practical - to avoid all forms of exploitation of animals for food, clothing and other purposes.

Why has the term "carnism" not been around for too long?

For many people it is a Self-evidenteating meat - even though it is actually a free decision for each individual. It is so natural that we believe "that's just the way things are". We have not realized for a long time that this behavior is irrational, not seen that it is destructive and not even known that we have the free choice to do something different. Only very few have recognized an initially invisible belief system like carnism - and that is precisely why the term first appeared in 2001.

Why do you eat some animals and not others?

Most people would probably claim to love animals and Cruelty to animals to refuse. Yet they pay money for someone else to torture and kill an animal for them. And so, for many, it comes to unpleasant, inner conflicts, the so-called cognitive dissonances.

Moreover, eating meat has long since ceased to be a necessity for our survival. It is a free choice. We should therefore first urgently answer one question: Why do we eat animals at all? Here are the logical answers:

It is about non-essential reasonsthat cannot justify on a moral basis what we are doing to the innocent animals. But these are the four main justifications for eating meat. But why are we suddenly outraged when someone offers us dolphin, dog, cat or horse meat?

Why do we eat some animals - and not others? To consider some animals as valuable and others as inferior and to justify this classification with human superiority is called Speciesism. There is no morally defensible and logical reason for the distinction. Only personal and from an early age consolidated convictions let us recognize a difference between dogs and cows, although both are animals around sentient beings who do not want to die.

Why has carnism been part of our society for so long and still is?

We Humans are not carnivores - our entire anatomy is geared towards the consumption of plants. In addition, the Factory farming our planet - and cost billions of animals their lives. (see also Live counter for killed animals worldwide)

We teach our children to be affectionate with rabbits while we put the floppy ears in the oven in the evening. How can it be that this contradictory and anything but human behavior is such an integral part of our society?

The answer is provided by the social and psychological defense mechanisms of carnism. They move us to participate in practices that are actually inhumane, without fully realizing what we are actually doing. I present the three crucial mechanisms here.

Denial - What does not exist we cannot question

The Concealment and invisibility make it easy for us to completely ignore the unpleasant aspects of meat consumption and production.

The psychology of eating meat is invisible. You can't tell from a steak on a plate that it used to be an animal. If they saw it, many would probably lose their appetite for meat. But as long as they see nothing of the animal suffering and the ecological and health consequences of meat consumption, the problems can easily be denied. And if we do catch a glimpse behind the scenes of factory farms and slaughterhouses in a documentary or on an advertising poster, the animal welfare labels quickly ensure that we regain a clear conscience.

But the Victims of Carnist ideology are unfortunately also invisible. Not only the billions of farm animals that have to suffer and eventually die for our "meat lust", but also the traumatized and mostly exploited slaughterhouse workers, the health of human consumers and last but not least the ecological consequences, such as the Climate change.

Notice: Basically, our behavior is the classic Ostrich tactics, where we bury our heads in the sand in order not to have to solve problems and injustices.

The system of carnism is also maintained by the fact that we have its View myths as facts. We have to eat beef and chicken eggs to get enough protein and drink mother's milk from cows to absorb enough calcium for our bones. At least that's what you could see in countless commercials in the past, which is why many people still use it to justify their meat consumption today. In addition Euphemisms such as steak, sausage and schnitzel, which take us even further away from realizing the piece of flesh of a sentient, innocent creature on our plate.

But the meat lobby has not only built an invisible and morally reprehensible belief system. It also tries by all means to continue its exploitative, environmentally destructive and health endangering activities. This works by presenting it as normal, natural and necessary to eat animals. But also by supporting counter-movements like the Veganism attacked and made to appear false. Here are a few examples of vegan myths and prejudices:

The goal, of course, is to embed these beliefs in our society in order to discredit the pro-animal message and make as few people as possible realize the invisible psychology of meat consumption.

Tip: Feel free to download my free e-book "All the arguments against veganism and how you simply refute them". down.

In our perception of animals in our society, we naturally distinguish between sacred domestic animals and inferior farm animals. Based on carnism, we divide them into "edible" and "non-edible". A dog is for petting and its meat is not eaten. A pig, on the other hand, is a farm animal whose meat you eat. Done. Thereby they are all sentient beings and there is not one logical, morally defensible reason to differentiate between them. Instead we speak of humane slaughter. Yet there is nothing human about what we do to "farm animals" - that is, compassionate, merciful and loving.

Obviously, carnism blocks our natural empathy, so that we act against our personal values without being aware of it. The system "flesh" has conditioned us not to think and feel. Only when we break out of the carnistic defense mechanisms do we recognize the reprehensible background and problems of meat consumption.

Tip: Do vegans have pets? In the linked post, you'll learn all about the compatibility of the vegan philosophy of life with keeping a pet.

Why does carnism represent a social injustice for humans and animals?

Those who close their eyes to the system of carnism in order to continue enjoying (their) meat, of course, do not see social injustice in it either. A popular counter-argument is that Eating meat a personal choice was. But since this decision direct and indirect victims it is just not personal. Cows, pigs, sheep, chickens and dozens of other animal species are first exploited and then killed. The resource-intensive factory farming is for the biggest environmental problems of our time responsible. If we simply consumed the plants grown as animal feed directly, there would no longer even need to be the World hunger give

The consumption of meat is simply the Result of the oppressive system of carnism. Man thought he was superior to woman because she was different. White people thought they were superior to dark-skinned people because they were different. And today we still believe that we are superior to non-human animals because they have feathers, wings, wool, or fur. For a more compassionate and just society, we must Take all forms of oppression seriously.

How we end carnism and related injustices

Meat consumption is a highly polarizing and difficult topic to discuss because of this manifested belief system. However, is it still so controversial even when we absolutely unbiased consider? Suppose we had never exploited and killed a single animal for our benefit until today. What would you think about someone who cuts up cows, Pigs gassed and Chick shreds? Probably you would rather see a psychopath in him than believe and accept that he behaves "quite normally".

We need to realize how much the psychology of eating meat actually affects us. Only then can we understand and adapt a forward-looking, peaceful, environmentally protective and animal-friendly movement like veganism - and actually live in harmony with our most personal, human values.

Maybe you didn't know about carnism until this article. Now you know what's behind it. What are you doing about it? Here are some more articles against this social injustice that will help you:

Do you have any questions or suggestions? Then I look forward to your comment!

PS.: Personally, the Dominion film because it shows the brutal truth of the meat industry. Be sure to check it out.