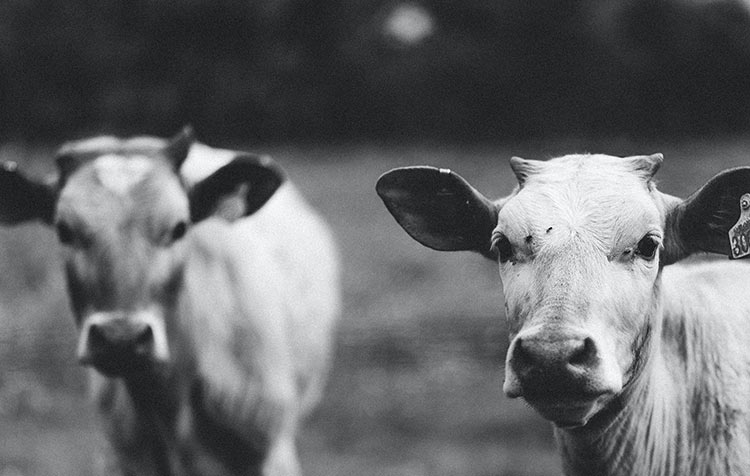 Why do vegans not drink milk? 10 reasons to give up cow's milk

Ask yourself, why vegans do not drink milk and for what reasons you can even give up cow's milk should? Then you've come to the right place. First of all, vegans drink milk. They just drink different milk that doesn't come from animals.

I, too, drank cow's milk regularly almost until I was 30. I just realized at some point why cows give milk at all, what the environmental impact of the "modern" form of animal husbandry is and what alternatives there are for animal milk. And then I stopped drinking it completely stress-free and from one day to the next.

In this post I would like to give you 10 good reasons for which vegans do not drink milk as inspiration.

Notice: Of course, there are dozens of other types of milk taken from animals besides cow's milk. For example, camel, buffalo or sheep milk. However, for the sake of simplicity, I will refer to cow's milk in this article.

Why do vegans not drink dairy milk?

So we can answer the question "Are vegans allowed to drink milk?" with a resounding yes. However, this is not animal cow's or goat's milk, but plant milk. For example, soy, oat, rice or almond milk. The table of alternatives is therefore really richly covered.

I am sure that not only their taste, but also one of the following arguments will convince you to use plant-based dairy products in the future. Let's go!

1. because cruelty to animals and exploitation of animals does not end

Even if you give up meat in the future, which is already a really important step, the consumption of cow's milk is still Animal suffering takes place so that you can drink your milk. The cow must be in the Factory farming still artificially impregnated against their will and kept in cramped stables under great physical suffering. In order for the animals to survive the ordeals at all, they are given antibiotics.

Tip: If you want to get an honest picture of what goes on in intensive animal agriculture, check out these Documentaries for vegans an.

2. because the mental suffering of animals also continues

Since cows are artificially impregnated, they get, as long as it is possible, in all regularity Offspring, which is then snatched from them no later than 48 hours after birthso that the cow's milk can be available to us humans. The mother cows run after their snatched babies until the barn door slams shut in front of them. These images (for example in the Dominion film) are difficult to watch. Nevertheless, they have also created in me an awareness of the mental stress of farm animals.

Vegans also end up not drinking milk because they cannot reconcile its production process with their own moral values.

3. because there are countless animal-free milk alternatives

Why should we drink milk that is obtained under questionable conditions and requires sacrifices? That's definitely what all vegans think! The following alternatives to easily do without cow's milk are already available to us in almost all health food stores and supermarkets:

We could extend this list here by a few more lines. But to me it is more important that you realize that the choice of plant-based milk alternatives is huge. The need to drink cow's milk is usually lost as a result.

4. because air, water and soil continue to be polluted

But the victim of the dairy industry is not even just the animals themselves! Factory farming, for example, contributes with its Greenhouse gases (e.g., CO2, methane, and nitrous oxide) also contribute quite significantly to the Climate change which, as we all know, claims victims all over the world. One of the victims is not least agriculture itself. Periods of drought and Extreme weather increases due to global warming and the fertility of the soil - among other things, this is why crop yields are at risk.

By the way, one liter of milk produces three liters Liquid manure.₁ This is used as a fertilizer, but in the end, with nitrates and antibiotics, becomes a danger to the soil, groundwater - and not least to our health.

5. because animals are not high performance machines

In the middle of the 20th century, dairy cows were still squeezing 2,349 liters out of their udders - today, at 8,059 liters, this figure is significantly more than triple.₂ Consequently, the "high-performance machines" produce 26 liters of milk a day! That's barbaric, don't you think? Barbaric and one of the reasons, Why being a vegetarian is not enough. The physical strain on the animals is simply too extreme.

So vegans also don't drink milk from cows because they don't want the Animals as emotional beings which, of course, they are. So anyone who likes to drink cow's milk should always keep in mind that it cannot be produced without animal suffering.

6. because it is breast milk for calves

As I said before, I also used to drink a lot of cow's milk. But at some point I learned that cows only give milk when they have given birth to a calf. And that's why they're basically artificially impregnated permanently, until at some point they're completely exhausted and no longer give milk. Their offspring do not see much of the milk, because we already separate mother cow and calf shortly after birth. Simply so that we can get as much as possible from the milk.

But it is mother's milk, human! Would you drink breast milk from another mother than your own?! Probably not, right? With cow's milk, however, that doesn't seem to be a problem for many. Vegans in any case do not drink milk, because it is unnatural to drink the mother's milk of another creature, which is actually intended for its offspring.

7. because the animals still have to die...

If you're still wondering why vegans don't drink milk, here's the next argument: when dairy cows stop giving milk from sheer exhaustion, they're no longer brutal dairy industry worthless and are consequently processed into meat. Since dairy cows only give milk for a maximum of 6 years, they have to pass away well before their natural life expectancy. Under natural circumstances, cows can live to be over 20 years old. At the farm "Hof Butenland", the cow "Milla" even lived to be over 25 years old.₃

But it is not only the mother cow that at some point ceases to be of value to the dairy industry. Young, male calves, which naturally give no milk at all, are considered useless by most farmers from birth. And they should certainly not drink away the mother's milk that we humans drink. Therefore, less consideration is usually given to the needs of the young animals. And so it dies sometimes earlier and sometimes a little later at the slaughterhouse.

So vegans also don't drink milk because higher demand would ensure that even more male calves are born and neglected or killed.

8. because the alternatives are healthier

Cow's milk is a industrially processed productwhich has to be homogenized, cut up, pasteurized and heat-treated. In addition, the cows are treated with antibiotics in their cramped stalls - drugs that have also been detected in meat and milk from the supermarket.₅

Fact on the side: Around 50 percent of antibiotics in Germany are used for farm animals.₆ The ingested residues in food can make us resistant to the drug when we really need it.

So vegans also don't drink milk from cows because they consider their plant-based alternatives to be healthier and more natural. Because the human body is by no means dependent on drinking animal milk.

9. because the deforestation of the rainforests continues

Keeping cows is very resource intensive - they need to eat and drink. So that they grow quickly, they get soybean meal from South America. The increasing consumption of animal products such as meat and milk has boosted demand for this protein-rich feedstuff enormously. And so, for example, 88 percent of the deforestation of the Amazon rainforest is attributable to the animal industry.₇

The keeping of livestock such as cows is a major factor in forests having to give way to animal feed cultivation and pastureland. Ultimately, of course, it is also a major contributor to the global species extinctions. More good reasons for vegans not to drink milk from animals.

Tip: More about the Deforestation and what you can do about it, you will learn in the linked article!

10. because the renunciation changes the offer in the supermarket positively

Never think that you can't change anything in everyday life. Vegans give up cow's milk because they want to change what is available in supermarkets. The successes are already evident - sales of vegan (and vegetarian) products increased by about 65 percent from 2017 to 2019.₈

Tip: More Veganism statistics can be found in the linked article.

The well-known chains already offer a number of plant-based milk alternatives that can no longer be counted on one hand. By working together to reduce the demand for cow's milk and promote more sustainable options, the animal cruelty and environmental destruction caused by the dairy industry will inevitably decrease. So listen to Gandhi - and be the change you want to see in the world.

Why vegans don't drink milk? Because they don't have to!

Because there are simply countless alternatives. Soy milk, rice milk, almond milk, oat milk - try them out. By the way, organic cow's milk is not a sustainable and animal-friendly alternative! Because no matter how green a cow actually grazes - in the end it is exploited and killed by us humans because we got a taste for its mother's milk. A habit that vegans want to change by no longer drinking milk from cows.

Use these posts to gradually eat a more plant-based diet:

I hope that the 10 arguments have sensitized you to the background of the dairy industry. Do you have any questions or can you think of any other reasons to avoid animal milk? Then feel free to write me a comment.

PS.: Nothing is worse than buying cow's milk and then letting it go bad. In the post Reduce food wasteYou'll get countless tips to ensure that fewer of your purchases end up in the trash.