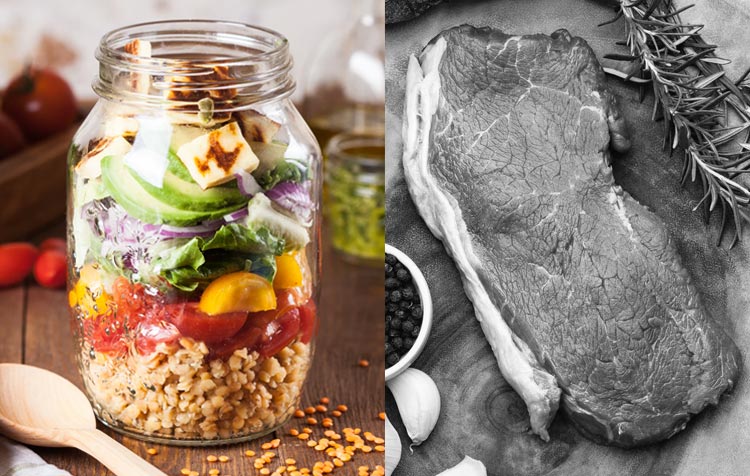 Is vegan healthy or unhealthy?

Is vegan healthy, or not? More and more people are opting for a purely plant-based diet for health reasons. But again and again we hear that this provides too little protein, iron, vitamin B12 and. It is also not recommended for athletes, children and pregnant women. And anyway, our teeth are made for eating meat. Humans are carnivores! So there are many myths and also misconceptions about the health effects of the animal-friendly diet.

In this article, I would like to give you everything you need to know once and for all. Among other things, you will learn whether and when vegan is healthy - and which nutrients vegans should pay special attention to in principle or in certain phases of life. Let's go!

Here is in advance a short Overview about the article:

Notice: This article is not a substitute for medical advice, but only provides general information about vegan diet health. Please consult your doctor if you feel unwell or want to prevent health problems with medical care.

Is veganism healthy from a medical and scientific point of view?

The most important thing in advance: According to the American Dietetic Association, the world's largest organization of more than 70,000 nutrition professionals, researchers and physicians, is a balanced planned vegan diet healthy and nutritionally appropriate and also provides health Advantages in the prevention and treatment of certain diseases. The plant-based diet is suitable for people in all phases of the life cycle, including pregnancy, lactation, infancy, childhood and adolescence, as well as for athletes.₁.

The Australian₂ and Canadian nutritional organizations₃, as well as the governmental, British health care₄ have also endorsed this position.

Vegans have a lower risk of common diseases

The American Dietetic Association study also shows that the risk of contracting typical widespread diseases is significantly lower among vegans and vegetarians compared to meat-consuming people. These include above all:

A well-planned, plant-based diet is therefore highly likely to minimize the risk of these diseases and increase life expectancy. However, it is also the often more health-conscious lifestyle of vegan or vegetarian people that contributes to this.

In principle, a well-planned change in diet is not likely to result in any nutrient deficiencies that could endanger health. Nevertheless, according to Position paper of the DGE certain potentially critical nutrients that vegans should keep a special eye on when making the switch, as healthy as the plant-based diet can be:

Tip: At Dietary supplements for vegan diet you will find more detailed information on this topic.

Vegan diet in the different stages of life

At the beginning I already indicated that many people believe that veganism can be harmful to health in certain phases of our lives, such as pregnancy. Here I would like to give you some important information about the vegan diet in certain stages of life.

During pregnancy and breastfeeding, the mother's nutrient requirements increase because she is also caring for the child. Ideally, therefore, foods that are as nutrient-dense as possible should be eaten during this time. A vegan diet during pregnancy and breastfeeding can be beneficial because it contains less saturated fat, more fiber, many phytochemicals and antioxidants, and a higher nutrient density.

During pregnancy, the need for beta-carotene, vitamin B2, B6, B9, B12, vitamin D, iron, iodine and zinc, among others, increases. The DGE has vitamin D, iodine and iron regardless of the form of nutrition defined as potentially critical nutrients. The requirement in pregnancy is:

For vegans the DGE has defined vitamin B12, calcium and essential fatty acids (EFAs) as potentially critical. During pregnancy, the following reference values should be supplied:

Veganism for children and teenagers

Nutrition in childhood is the foundation for the child's later eating behavior. This is where the "operating system" is developed, so to speak. That's why it makes sense to focus on a healthy and tasty diet with lots of fruits and vegetables.

Nutrients to pay special attention to during this time are: Protein, folate, vitamin B12, iron, calcium, zinc, essential fatty acids and vitamin D. As soon as girls start menstruating, the iron requirement increases, so that a differentiation must also be made here depending on gender. With a well-planned plant-based diet and supplementation of vitamin B12 and vitamin D, the nutrient requirements needed for growth and development can be well met.

Depending on the type of sport, intensity and duration, the need for energy and nutrients can increase for athletes. Increased sweating increases the need for calcium, iron, zinc and iodine. Magnesium is particularly important for muscle function. Vitamins B1, B2, B3 and B6 are particularly important with increased energy and protein intake . Vegan athletes should pay particular attention to their intake of iron, zinc, iodine and vitamin B2. In a balanced, plant-based diet, supplemented with supplements if necessary, the nutrient requirements can be safely met. The other nutrients, such as magnesium, calcium, and vitamins B1, B3 and B6, are usually not a problem in a plant-based diet.

Tip: Just in Diet phases you should pay special attention to nutrient dense foods in order to supply sufficient micronutrients. Here, a plant-based diet is a good choice due to its lower average calorie content and the large number of vitamins and minerals it contains.

A vegan diet is also a good option for seniors to stay fit in old age. While the need for micronutrients remains the same for seniors, the need for energy decreases. Therefore, the high nutrient density of plant-based foods is also an advantage here. The high fiber content also ensures adequate intestinal motility and can thus prevent constipation.

Vitamins D, B9 and B12, iron, magnesium, iodine, Selenium, chromium, calcium and zinc should be particularly observed in old age, regardless of the dietary form. Due to the reduced feeling of thirst, attention should also be paid to sufficient fluid intake. For vegan seniors, vitamin D, B12, iron, iodine, selenium and zinc are particularly relevant.

A Malnutrition in old age can result from loss of appetite, as well as chewing and swallowing disorders. Mental limitations, e.g. confusion or dementia, psychological problems such as depression, social changes and financial problems can also contribute to so-called old-age anorexia.

I personally let Regular blood tests with my family doctor to make sure that I am also taking in the potentially critical nutrients in sufficient quantities. I have been living vegan for some time now and in my case, so far, I am not deficient in any of the nutrients. In order not to jeopardize your health, I advise you to take the Have dietary changes guided by a nutritionist who specializes in vegan/vegetarian diets..

Veganism also promotes the health of others

The health aspects of the plant-based diet without the "detour animal". but do not only concern their own health and the health of animals, but also the health of other people. Because veganism works even the biggest Environmental problems of our time - like the Climate change, increasing Extreme weather, the Deforestation of the rainforests, the Species extinction, the Air pollution, the Water shortage and last but not least the World hunger - against. In this way, the respectful, animal-friendly way of life also makes a decisive contribution to the health of other people and future generations on this planet.

Veganism is more than health: Many people become vegan for health reasons. Ecological and above all ethical motives are also responsible for the steadily growing number of vegans. Learn more in the detailed article on the topic "Why go vegan?".

A balanced vegan diet is healthy

You can't make a blanket statement that vegan is healthy or unhealthy. However, science, research and medicine have proven that a balanced vegan diet can be healthy in all phases of life, at the healthy slimming help and even prevent serious diseases. The emphasis is on the word "balanced". Because chips and cola are also vegan and anything but healthy.

There is no moral and vital reason for consuming animal products and thus no reason for the Cruelty to animals, which goes hand in hand with their production. Everyone should ask themselves why he/she continues to consume body parts of cows, pigs or chickens when it is not necessary and even tends to be harmful to health.

PS.: You want now start into vegan life? In the linked article there are the most important tips!