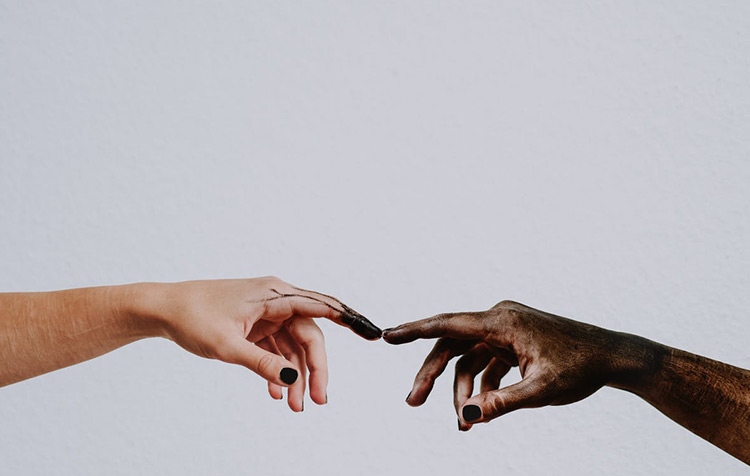 Does veganism promote human rights? And if so, how? I, too, have been living vegan for some time now and often hear that we should rather promote human rights first before we devote ourselves to the rights of animals. Thereby I step with my decision for the Veganism - like many others - advocates for both animal rights and human rights.

Vegans are mainly advocating for animals because, unlike us humans, they have no rights and not even a voice or language that we understand. Even if animals are no longer considered things, they do not have actual rights and obligationsthat are legally enforceable. Even if they were, they simply could not sue for their rights. Nevertheless Animals innocent, emotional, sentient beingsthat feel emotions such as fears and joys. Just like us humans.

The beauty is that choosing the vegan lifestyle - whether consciously or unconsciously - automatically includes much of the 30 human rights of the Universal Declaration of Human Rights promotes. Why you can also be vegan for people and not only for animals, I would like to introduce you now with 6 examples.

By the way: Ethical veganism itself is also recognized as a lifestyle or way of life that falls under the protection of Article 9 of the European Convention on Human Rights as a worldview.

How is veganism good for us humans? 6 examples

„All human beings are born free and equal in dignity and rights." says the Universal Declaration of Human Rights. Behind all the rights are basic human needs - necessary for survival. And "All men are equal before the law." says Article 3 of our Basic Law. So we are protected by the laws.

Animals unfortunately not. Who lives according to the values of veganism, wants indeed primarily the Cruelty to animals and end the exploitation of animals. But most people live vegan because both animals and we humans, not to mention the planet on which we exist together, benefit from this way of life.

Now here you will learn some examples that you can also be vegan for people!

Tip: Do you already know what the Difference between veganism and plant-based diet lies? Veganism is a way of life, plant-based nutrition is a form of nutrition. You can learn more about it in the linked article.

1. vegan so that no one has to go hungry anymore

Don't you think it's kind of strange that we have enough food to feed 56 billion farm animals a year₁, but that at the same time more than 800 million people in the world go hungry need to?₂ Seven plant calories are needed to produce one animal calorie.₃ Those who eat a plant-based diet thus avoid the resource-intensive "detour animal" in their own diet. No one in the world would have to go hungry if we all ate a vegan diet.₄

If you want to know even more tips against global famine, feel free to check out the article Stop world hunger inside.

In this regard, veganism promotes the following human right:
"The right to a bed and something to eat. We all have the right to a decent standard of living, even if we can no longer earn money. That includes shelter, food, clothing and medical care."

2. vegan for the employees of the meat industry

The system of the meat industry, respectively Factory farming is a System of exploitation and intimidation. Mostly, cheap labor from Romania is used, who have no choice but to pursue this job. They work under the most gruesome conditions: Getting up at night, 10 - 12 hours a day, 6 days a week - for 1200€ gross. Costs for accommodation, car journeys and work clothes are even deducted from this.₅ Add to this the acts on the farms ranging from animal cruelty to the bloody slaughter of a living creature. Post-traumatic stress disorders and psychoses are a logical consequence.₆

We would never want to do this job for ourselves or for our own child. But eating meat or animal products makes this job necessary. As a vegan, you therefore stand up for the human rights of the employees.

What else you can do against the factory farming systemyou can read in the linked article.

"Our responsibilities. We all have duties to other people as well. We should protect their rights and freedoms."

3. vegan against crime, racism, murder and brutality among us humans.

Or in short: vegan for peaceful coexistence among each other. How is that supposed to work? Racism, sexism, oppression, imprisonment, torture, violent crime - the list of injustices in our society may be endless. But veganism brings human values such as mercy, respect, compassion, love and equality back to the forefront. Equality especially because SpeciesismThe fact that we pet some animals (dogs, cats...) and eat others (cows, pigs, chickens...) is an injustice that a vegan eliminates. One simply understands all animals as sentient beings that want to suffer or die just as little as we humans do.

And how does it affect the Veganism probably affects our social coexistence, when we no longer even harm animals? The psychological hurdle of causing pain to another person would be many times greater - and fairer dealings with one another the expected consequence.

"No one should be treated differently for no reason."

"Slavery is forbidden. No one has the right to enslave us."

"No one should be tortured."

"A free and just world. Everyone has the right to a society and to a world in which human rights and freedoms can be realized."

Tip: At Factory Farming & Holocaust you will find a memorable Interview with Holocaust survivor Alex Hershaft, who is a strong advocate for a vegan lifestyle because he recognizes many parallels of concentration camps and the way farm animals are kept today.

4. vegan for indigenous peoples in the rainforests

Factory farming is a major driver of the Deforestation of the rainforests, which must give way to pasture and make way for the cultivation of high-protein soy as animal feed. Every minute, about 42 soccer field-sized areas of the unique rainforests are cut down₇. This not only accelerates the Species extinctionbut also deprives indigenous peoples of their habitat. For example, the deforestation of the Amazon rainforest primarily affects the indigenous population of Brazil, which is threatened by the large demolition machines and the reckless behavior of the forest workers. As a vegan, you also stand up for the rights of these people by protecting their habitat.

At Save rainforest you will find more tips and measures that you can implement in everyday life to combat this environmental problem.

"All people have a right to life."

"Our responsibilities. We all have duties to other people as well. We should protect their rights and freedoms."

5. vegan against the water shortage

Including the water used to grow animal feed, the meat and dairy industries account for 27 percent of global freshwater consumption.₈ Just to produce one kilogram of beef, more than 15,000 liters of water - or about 111 full bathtubs - are required.₉ This is called virtual water consumption, which does not come directly from the faucet in our kitchens, but is needed in the production of our preferred foods. So when we eat meat, it's a real, resource-intensive privilege. Ultimately, we are living at the expense of nature and at the expense of other people who are suffering from drought and Water shortage suffer and have to hope every day to get enough Drink water to be able

Let's not get it wrong: avocados and many other plant-based foods also consume a lot of water. But the "detour animal" pushes this to the extreme. In this way, vegans also stand up for human rights.

6. vegan against climate change and its consequences for all people

Around 15 percent of all greenhouse gases caused by humans worldwide are attributable to livestock farming alone.₁₁ The emission of these climate-damaging gases is a major driver of the Climate change - so of the biggest environmental problem of our time. It affects all people - and all life on the planet. It not only accelerates water scarcity, but also causes crop failures, food shortages, floods, storms, and drought - the number of climate-related natural disasters has tripled since 1980.₁₀ In the end, millions of livelihoods perish under it - and people flee their own countries. Climate change ultimately affects everyone - as it promotes inequality, discrimination and injustice around the world.

While a meat eater blows about 1,950 kilograms of CO2 per year into the atmosphere for his or her diet, a vegan gets by with less than half.₁₂ An important boost, then, for the preservation of human rights.

At Stop climate change you can find out what else you can do about the environmental problem.

Even if veganism is primarily against the exploitation of animals, vegans are of course not indifferent to human rights - quite the opposite! In the end, basically all living beings on earth are better off the more people eat a plant-based diet. Because we interact more peacefully with each other, because fewer animals have to suffer and because we protect the only planet on which we live.

This article was really close to my heart - as well as all the rights of animals and us humans. Do you have questions or can you think of other things to say about veganism and human rights? Then just write me a comment.

PS.: Look you with pleasure still further in my Sustainability Blog around. There you will learn, for example, for which reasons I still live vegan.