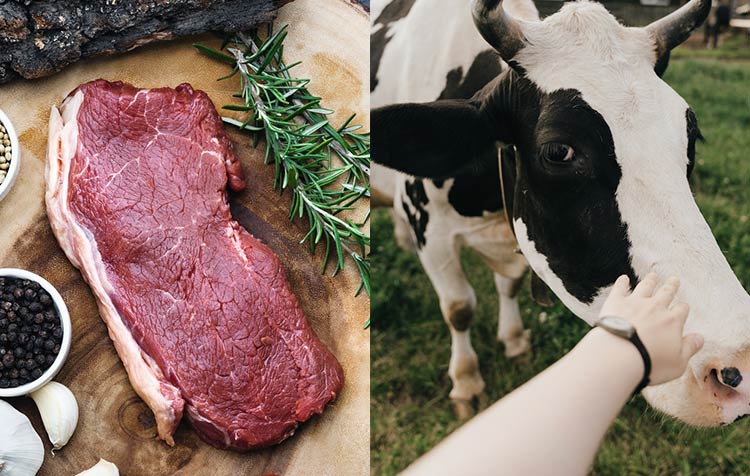 Can you master the transition from meat eater to vegan and eat only a plant-based diet overnight? I have many people in my environment who have suddenly given up meat and other animal foods from one day to the next. And even though I was initially a vegetarian myself for some time, I can certainly understand this sudden change.

In this article, I would like to briefly and concisely give you the reasons for this and show you how the new eating habit can be successfully mastered in practice, despite years of meat consumption, without any great moments of stress. Let's go!

Why are many people switching directly from meat consumption to a plant-based diet?

The motives for making the direct switch to a vegan lifestyle are fundamentally different for each individual. Ecological or health reasons are often decisive. For example, when you learn that the Factory farming crucial for the Deforestation of the rainforests and others Environmental problems of our time is responsible. Others are convinced by medical advice to avoid meat and other animal foods because their consumption causes antibiotic resistance.

Most people, however, will be out of ethical reasons vegan from now on. In the truest sense of the word, the vegan way of life usually only takes hold with intensive Examination of the production of animal foods or other key experiences with animal participation. I would like to show you now how this inner change comes about without long in practice.

What is the Difference between veganism and a plant-based diet? In the linked article, I explain to you in great detail why veganism is a way of life and the exclusive consumption of plant foods is a way of eating.

1. because they experience the animal suffering in the meat, egg and dairy industry for the first time

Animal foods on the dinner table have a history. This can be well ignored, as long as the own meat consumption is not questioned. or one of the Cruelty to animals for their own nutritional habits. But at the latest after one or the other vegan documentation or reporting on the background of factory farming, the awareness then intensifies. Because in a place where animals arrive whole and come out in pieces, nothing "human" can have happened to them.

Personally - and many other people as well - the Documentation Dominion ultimately convinced of the step to veganism. One sees there simply what animals must go through for our nutrition, our entertainment and our clothing and Feels own responsibility up close. Animals are kicked, beaten against the wall and not least gassed or killed by other methods.

2. because they can put themselves in the position of the animals

We humans eat meat mostly for four reasons: Taste, tradition, habit and convenience. But as soon as we think outside the box and put ourselves in the animals' shoes, the questioning begins. If you yourself were treated like the animals in factory farming, one would also ardently wish that the perpetrators would finally stop. The likelihood of going directly from meat eater to vegan increases the moment you make that connection.

3. BECAUSE THEY ARE SICK OF THE CONTRADICTIONS BETWEEN THEIR THOUGHTS AND ACTIONS.

In everyday situations meat eaters but also vegans come again and again into the situation, justify their eating habits to have to. Since meat consumption is rightly criticized for health, ecological and ethical reasons, the defense of this act also repeatedly leads to fierce, internal conflicts, the so-called cognitive dissonance.

This unpleasant emotional state arises especially, because one's own values and one's own actions do not fit together. I love animals but eat meat, is a classic example of this. Preferring to behave according to personal values, many people choose to make a quick and direct switch from meat-eater to vegan.

Notice: I watched many vegan street interviews and noticed how contradictory people argue not to have to change anything. When I recognized myself in it and was very uncomfortable, then came the quick insight.

4. because they have experienced the closeness to a usually exploited animal

Many people don't even think to question their own eating habits because of differences between farm animals like pigs and pets like dogs. But ultimately, both are innocent, feeling organismswho do not want to die. This aha experience is experienced, for example, at the Volunteering on the mercy farm or visiting a friendly farmer.

Basically, it doesn't matter where: as soon as we meet pigs, cows, chickens or other "farm animals" in person, we suddenly no longer see any differences - and the way is paved for the transformation from meat eater to vegan.

Tip: There is now a technical term for the belief system that leads us to simply accept the torture of animals for our eating habits as "normal" - the so-called Carnism. You can learn more about it in the linked post.

Switch from meat eater to vegan made easy

At some point it clicked with me, so that I have changed some things in my life positively. Here I would like to briefly tell you some Tips that you can use in a fairly comfortable and sustainable way to start into the vegan life can:

From meat eater to vegan: usually triggered by a key experience

Like any change in life, the step towards veganism is usually triggered by a certain experience or event that becomes permanently fixed in one's mind and provides lasting motivation. This can be a stirring documentary, a personal experience with an animal, or even a simple blog post 😉

In any case, I hope that I could make you aware of why so many people suddenly become vegan from one day to the next. Finally, I would like to give you some further articles along the way:

PS.: Look you with pleasure still something in the Vegan diet blog around. There you can find out, for example, whether Veganism really so expensive is, as is often claimed.