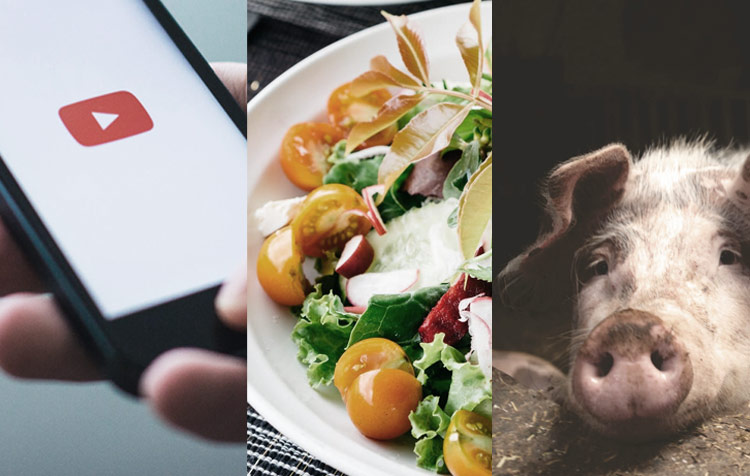 Looking for inspiring vegan YouTube channels? Don't worry - you'll find them here! I remember exactly how much I used to celebrate meat and other animal foods like eggs or cow's milk. But today I am aware of the problems I cause by consuming these products. Climate change, Animal suffering, Deforestation of the rainforests. The list is endless.

Here I would like to introduce you to the seven - German and also English - vegan YouTubers who have inspired me personally to change my eating habits. Let's go!

7 vegan YouTubers who will shape your attitude

Each YouTuber defines and publicizes their arguments for veganism in their own way. One is extremely scientific and calm, the other moral and direct. So just take your time and see which channels you can identify with best. In any case, all of the following vegan YouTubers will give you plenty of input that will inspire you to think and make personal changes. Have fun!

Gordon and Aljosha from "Vegan is unhealthy" have inspired me through their funny but at the same time enlightening way with veganism brought into contact. The two graze the entire, broad spectrum of plant-based diets - from the ethical reasons to the PROTEINS!!! Also cooking videos and posts with interviews on the street are part of their vegan Youtube channel.

It's funny that the very first vegan YouTube channel on this list comes up with one of the typical counter-arguments against the vegan life begins, doesn't it? But don't worry, the name of course only serves to also address exactly those people who are familiar with the personal change particularly difficult.

Notice: Through them, for example, I learned, Why you should give up eggs.

Ed Winters is one of the most passionate and patient vegan YouTuberthat you can only imagine. The video I embedded for you was one of the first I saw of his. It has contributed significantly to the fact that I have questioned my own eating behavior. In his videos, he holds lectures every now and then - but primarily he does educational work in the pedestrian zones.

In its Book Vegan Cliché Adé Niko Rittenau already clears in scientific but nevertheless entertaining way with the typical Prejudices against the vegan diet on. I can only recommend it to you!

After reading the book, I basically watched all of his videos. For me, there is no YouTuber who explains more facts about veganism. Absolutely insightful - and thought-provoking.

Joey Carbstrong is a vegan YouTuber who has been Addresses the effects of one's own eating behavior very directly and perhaps a little too harshly for some. In the pedestrian zones he usually places his table with a poster on which a polarizing appeal such as "Anyone who donates to koalas but eats meat is a hypocrite. Prove me wrong." It makes it easier for him to get into a discussion with people. With every other video I saw of him - and every stuttering interlocutor, I became more and more aware that there is no single, meaningful argument against veganism. More and more I recognized my former self in it. All the easier was my decision to change my diet.

Sadia has a incredibly clear and reassuring mannerto explain the vegan lifestyle. Her YouTube videos seem almost narrative. And since she explains, just as clearly, the practical implementation in everyday life, she basically takes everyone with her on the journey to a plant-based diet. It quickly becomes clear that the changeover is not a hair-pulling action, but rather a steady process towards a sustainable world that no one need be afraid of.

Patrick is also a very level-headed YouTuber, dedicated to veganism and especially its prejudices. In his videos, he explains, for example, in a completely logical way, why plants have no feelings or, as embedded above, why the argument "people have always eaten meat" today is factually no longer worth anything. With his videos he has already opened the eyes of many.

James Aspey has my Compassion for living beingsWe exploit them for our own pleasure, and that's what activates them the most. I don't know any other vegan YouTuber who argues so logically and always remains calm and level-headed. He doesn't force veganism on anyone, but opens people's eyes through logic. In my opinion, he is the YouTuber who can really make anyone a vegan. New content rarely comes on his vegan YouTube channel anymore, but what's online definitely has it in spades!

Veganism is the key to basically the full range of the biggest environmental problems of our time to solve. At the same time it is healthy and prevents the exploitation of animals in the Factory farming.

I hope that these vegan YouTuber could also open your eyes and especially your heart for the plant-based diet. Here I would like to give you some more articles that will help you with your dietary change:

Do you have any questions, tips or other vegan YouTubers you would like to recommend? Then just write me a comment.

PS: Need some more inspiration? Then be sure to check out my collection of the best Animal welfare quotes or in the list with the best Sayings about veganism.