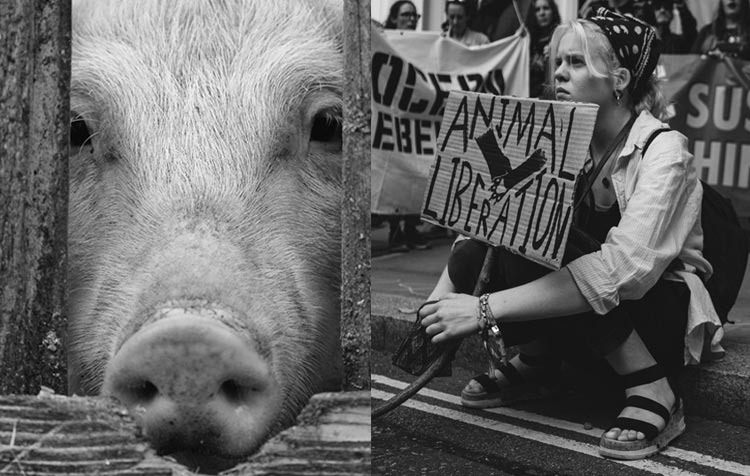 Vegan against violence - The influence of veganism on our society

Are vegans against violence? And how can a lifestyle that tries to avoid all forms of exploitation and cruelty against animals positively influence our social coexistence? If you're looking for answers to these questions, you've come to the right place!

"Veganism is too expensive, too exhausting, too extreme for me" - in everyday discussions about the Veganism usually revolves around the advantages and disadvantages of the lifestyle for individuals. But rarely is there talk about how it can combat violence, crime and hatred while promoting peace, equality, solidarity, compassion and love throughout our national and global society.

In this article, I would like to show you the opportunities of veganism for the coexistence of all people on this planet. First, we will briefly clarify two frequently asked questions to prevent misunderstandings. Let's go!

To what extent is one vegan against violence?

Veganism is a way of life that is quite specifically against the Animal mistreatment and Cruelty to animals speaks out. Environmental degradation, personal health hazards, and the suffering of countless people in developing countries also drive people to go vegan. Vegans are concerned with living in harmony with animals, preserving the resources of our planet and living together in peace with fellow humans. So as a vegan you are already by definition "vegan against violence, because one pursues a way of life that opposes destruction and brutality.

Vegans are not better people - but they are, according to scientific studies, more liberal, more open to new experiences and bring greater Trust in their fellow human beings with.₁ They know and respect that Animals sentient beings are, who feel pain and suffering just as we humans do. And they also know and respect that other people have to suffer when animal products are consumed in our society. Vegans take personal responsibility for the consequences of their actions - and change their behavior out of an established, intrinsic, ethical motivation.

Good to know: Veganism is a way of life that opposes the exploitation of animals - vegetarianism is a way of eating that avoids meat. All about the Differences between vegan and plant-based you can read in the linked article.

Are there actually also violent and criminal vegans?

It may be that vegans are less prone to violence and crime because of their attitude - but just because you live vegan, you are of course not automatically a perfect, nice, peaceful and law-abiding person. Of course, there are also vegans who glorify violence and engage in criminal activities - not least because it is often primarily stress, anxiety and mental health in general that is the triggering cause for a crime. Attila Hildmann, with his aggressive propagation of conspiracy ideologies, is a good example of this. And then there are the vegans who cross the boundaries of what is permissible and perform illegal acts in order to protect animals.

We hold: vegan living people can of course also be violent and criminal. But the majority of them are less prone to violence and criminality because it is not their choice of diet but the way they came to this decision that is deeply rooted in them. They are vegan against violence. It is a moral choicewhich is based on human values such as compassion, love and respect for all living beings.

The scientific studies on the influence of veganism on our society are unfortunately still scarce. But I can claim, at least for myself personally, that the decision to live vegan, more compassionate, stress-free and alive has made. I find it rather criminal that we live at the expense of other people and animals. And that organized animal suffering is legal and even subsidized by the state, although probably every person would claim to abhor animal cruelty.

What positive influence does veganism have in our society against GEwalt and other problems?

Crime, inequality, aggressiveness, corruption, oppression, division, torture, racism, sexism - our global society faces massive challenges. Fortunately, the vegan lifestyle is more than just giving up meat, milk and eggs. It brings with it an incredible potential to influence the coexistence of us humans around the world in a sustainable and positive way. Not least because it raises awareness of essential and fundamental human values. What exactly this looks like, I would like to introduce to you now.

The Health condition of the offender can play a decisive role in a theft, damage to property or even a murder. A balanced, plant-based diet promotes health. Vegans, for example, have a lower risk of common diseases, such as type 2 diabetes, heart disease, obesity and hypertension.₂

Many vegans make a conscious decision to improve their health. And they also give up old habits in order to improve the Protect other people's health.

Don't you think it's strange that we have enough food to feed 56 billion farm animals each year₃, but at the same time more than 800 million people are starve in the world have to?₄ If we have the Directly consume plants not a single person would have to go hungry.₅

Veganism is a very pacifist movement that specifically opposes war, brutality and aggressiveness. Instead, it advocates love and mercy towards all animals and humans. Most vegans are therefore vegan against violence.

Individual studies have already shown that a plant-based diet can make people who are prone to violence more peaceful.₆ I personally also believe that one can more inclined to violent acts if one eats violence or is willing to pay for violence against animals. There may only be a juicy cutlet on the plate - but the pig that had to die for it has experienced violence. There can be no doubt about that.

People break a window - or commit murder. The image of crime has many faces - to what extent veganism has an influence on criminal activity can therefore not be answered in a general way. But a healthy, balanced plant-based diet does, that people feel better psychologically and physically.

With an increased sense of well-being, the motivation to steal from, beat up or murder someone is automatically reduced. If we no longer even do anything bad to animals, then ultimately the psychological hurdle grow to harm other people. Even if it does not exclude criminal acts, this is an important basis for peaceful coexistence of all people in our society.

The vegan movement also stands for Fairness, solidarity, respect and equality - that is, for very basic, human values. As a vegan, one likes to put personal advantage in the background in order to make life more pleasant for animals and other people as well.

In the Factory farming innocent, sentient creatures are kept in cramped, dark stables. Antibiotics are added to the feed of chickens, cows or pigs so that the animals can survive this time at all, before they then have to expect their death, which has long been scheduled. This treatment of animals is a extreme injustice, far from all human values.

But not only the animals, but also the Meat industry workers, indigenous people and hungry people suffer from the high consumption of meat and other animal foods in our society. Vegan against violence is a motivating factor - but the way of life brings so many, further, great chances for our living together, which we absolutely must use.

Tip: To what extent Veganism human rights I will explain this in detail in the linked article.

What do you think: how might it affect our social interaction if we no longer even do anything bad to animals? The Veganism is not a luxury problem, but a movement for more compassion towards other individuals. Vegans show a special Empathy and care - Accordingly, the inhibition threshold to injure an animal or another human being in any form is also massive.

At present, many people distinguish between Domestic and farm animals - This differentiated approach is called Speciesism. Personally, I now see no difference between a dog and a cow. They are both sentient beings that should be stroked and not slaughtered. I am firmly convinced that this form of compassion for all sentient beings will have a lasting, positive influence on our society.

The "modern animal husbandry destroys our planet, our livelihood. We are literally "sawing the branch we sit on," polluting the air we breathe, the water we drink and the soil we grow our food on. Whether the Climate change, the Deforestation of the rainforests, the Air pollution or the Overfishing of the seas: resource-intensive factory farming is a key contributor to the fact that coming generations have to fear for their future. (under why vegan? I will explain all this to you again in detail)

Accordingly, the vegan lifestyle also shows compassion towards our children, grandchildren, and all those who may yet come, by taking the biggest environmental problems of our time counteracts and alleviates the fears of future generations.

Vegan against GEwalt, injustice and criminality - An enormous potential for our society

The vegan lifestyle promotes non-violence and equality and specifically opposes violence and discrimination. It is the psychological levers for a more peaceful coexistence of all people in the world. Many of us believe that we can do nothing against world hunger, violence or exploitation of other people. But there is probably no more politically effective act, with which quite a few social problems in the world are fought at the same time, than simply to live vegan. Because this way of life has an enormous social influence.

Whether vegan or not, there will always be assholes in the world. But veganism at least holds enormous potential for a more peaceful coexistence of all living beings on this planet. Vegan, because violence tastes no one.

Do you have any questions, suggestions about this post about the positive influence of the vegan lifestyle in our society? Then feel free to write me a comment.

PS.: Did you know that many people in the world have to flee from the ecological consequences of the resource-wasting way of life in our society? More about Environmental Refugees you can read in the linked article.