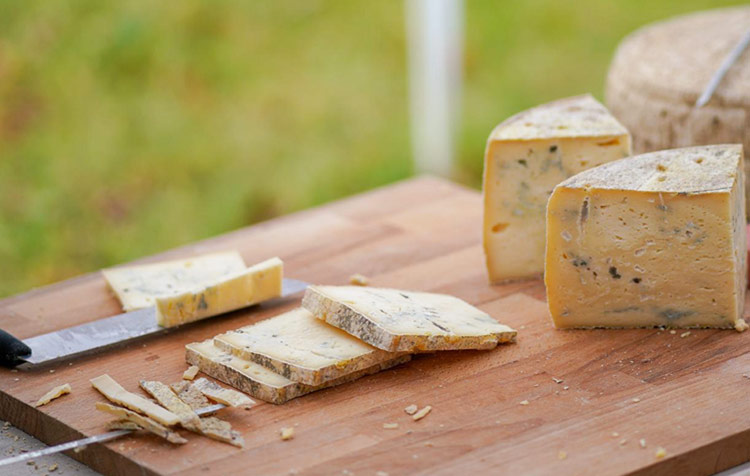 Why don't vegans eat cheese? 10 reasons to give up cheese products

You want to know why vegans don't eat cheese? Then you've come to the right place! There are about 5000 different types of cheese worldwide, which are created when milk turns sour and the solid components separate from the liquid whey. For us Germans, cheese is something of a sanctuary - hardly any country surpasses our cheese in terms of variety and quality. Basically, there are cheeses from all regions of the country - from Holstein Tilsiter to Allgäu Emmentaler. We eat it, for example, in one piece, as a slice on bread, gratinated on a casserole, as a fondue, with a salad, melted on a burger or complementary and nice and soft as a dip.

Accordingly, many people are surprised when they hear that someone actually voluntarily renounces it. In this article, I would like to introduce you to 10 reasons why vegan people do without cheese products. Let's go!

An overview in advance: Vegans do not eat cheese because...

Notice: Even if the subject matter is very similar - Why vegans do not drink milkI will explain this in more detail in another article.

1. cheese is of animal origin

First of all: Vegans eat cheese - but not if it comes from Cows, sheep, goats or other milk-producing animals. As a vegan you try to avoid - as far as practical - all forms of exploitation and cruelty to animals for food, but also for clothing, entertainment and other purposes.

Vegetable cheese alternatives, for example on the basis of almonds or coconut oil, are therefore very welcome in the lives of vegans. Not least because they are causing more and more people to eat an animal-free diet. A pizza without cheese? For many people unimaginable. But fortunately, there is, after all, a vegan, melt-in-your-mouth sprinkle cheese.

2. cheese is not suitable for lactose intolerant people.

Many people have a congenital or acquired food intolerance to lactose, a Sugar found in the breast milk of mammals. Vegan foods are (usually) lactose-free. So vegans with lactose intolerance definitely refrain from eating cheese not only for ethical reasons, but definitely also for health reasons.

3. animals are also killed for cheese

"After all, animals aren't killed for milk..." - have you ever heard this sentence or even said it yourself? As a vegan, I avoid dairy products like cheese because it is only true at first glance. At closer examination with the dairy industry, you quickly realize that animals do die.

4. cheese is often not even vegetarian

Cheeses like Parmesan, Grana Padano, Gryere or Feta mostly contain animal rennet. It is obtained from the rennet stomach of young ruminants. Cheese based on animal milk is already not vegan by definition - but many types of cheese are not even vegetarian. One more reason for vegans not to eat cheese.

5. the dairy industry is brutal

For cows to give milk, they must be pregnant. "Milk cows" are artificially impregnated again and again with bull semen and a spirited grip, until at some point they are physically are no longer able to give milk. This is usually the case after about 5 years, although they may well live 25 years. A "dairy cow" that no longer yields is, as I said, killed and processed into meat.

Their offspring is snatched away from them every time until then, so that it does not get the benefit of the mother's milk. It is a real Vicious circle for dairy cows - which Dairy industry brutality underpins and makes it understandable why vegans do not consume cheese.

Be sure to check out the Documentation Dominion an. There you can still much better put yourself in the position of the animals and form an informed opinion.

Tip: I have given you a list of Tools from factory farming that are quite normal standard in the industry. Decide for yourself whether you find them cruel - for example, if they were used on dogs or cats.

6. cheese is not as healthy as many believe

Cheese contains valuable nutrients, such as Calcium and Zinc. So far so good. But most types of cheese are also rich in unhealthy saturated fatty acids, which can Cholesterol level rise let - and nutritional diseases favor. This is rarely mentioned in advertising, is it?

Variety and taste of the cheese make some people overlook even the fact that Pus and feces can be in the cheese. 100.000 Germs per cc of cow's milk are permitted under the Milk Quality Ordinance of 1980. Accordingly, cheese with Listeria be contaminated. Another reason why vegans do not eat cheese.

To obtain milk for cheese dairies, the animals must be fed. Between 50 and 80 kilograms of fresh mass is what a cow eats per day. Mainly concentrated feed such as soy, corn or millet. In addition, she drinks every day up to 150 liters of water.₁ ONE COW - ONE DAY! About 1.5 billion cattle are said to be kept worldwide.

Not to mention the energy-intensive stables and animal transports. This could be avoided if we were to Consume plants directly would.

8. animals have not done anything to us

I have already told you how cruel the "milk system" is. Apart from the fact that no one deserves to be exploited and ultimately killed - Cows, sheep, goats & Co. have not even done anything to us. They are innocent and have a world of feelings, just like we humans do. A good taste is no justification to pay money for milk and cheese products and ignore such cruelties. For many vegans, this is a major reason to avoid animal cheese in all colors and forms.

To make matters worse all animal products highly inefficient. 77 percent of the world's land area is occupied by the "animal as food producer" - but it provides only 18 percent of the calories.₂ It is so much land area neededbecause concentrated feed (especially soybean meal) has to be grown for the animals and, after all, they have to graze somewhere. Accordingly, the Factory farming also the main driver of the Deforestation of rainforests - and the essential reason why nowadays still People starve must.

Above all, it accelerates the Climate change and its consequences. Not only through the energy required for animal transport and stables and the high water demand - but also through the methane emissions of the cows. The German Federal Environment Agency estimates that dairy cows contribute over 14,000 kilotons of CO2 equivalents to about 20 percent of total greenhouse gas emissions of German agriculture.₃

Notice: These are just a few ecological reasons to avoid animal products such as cheese. At "Why vegan?" I will explain all my personal motives.

10. there are more and more plant-based alternatives!

Because I was really addicted to cream cheese & Co., I found the "renunciation" of cheese at my Conversion from vegetarian to vegan comparatively the most difficult. But on closer inspection, it is nowadays really easier than everThe result is that you can do without animal cheese, but without having to give up the taste.

Whether hard cheese, spread cheese, cream cheese, shepherd's cheese, mozzarella or slice cheese - there are now so many purely plant-based alternatives that taste really good! In Munich there is even the first manufactory that sells exclusively vegan cheese - with constantly growing variety. This is also increasing in the classic supermarkets and organic markets.

So I can as a vegan continue to eat my funghi pizza or pasta casserole with gratinated cheese - only without the animal suffering.

Tip: By the way, cashew nuts are also very good to imitate the cheese sauce, which is so popular with many. All no longer a problem!

Why vegans do not eat cheese? Especially for the animals!

Now you've seen many reasons why vegans don't eat animal cheese. None of them is the taste - because most vegans also find that good. Rather, it is the background of cheese production and its consequences for humans, animals and the environment. With the growing range of plant-based cheese alternatives, it is basically no longer possible to speak of a genuine renunciation.

I hope I was able to clarify for you the vegan motives for "giving up cheese" and preferring plant-based cheese slices. Do you have any questions, tips or your own experiences with animal or vegan cheese that you would like to share? Then I look forward to your comment.

PS: Feel free to look around the blog some more. Learn now next for example, Why vegans do not eat honey.