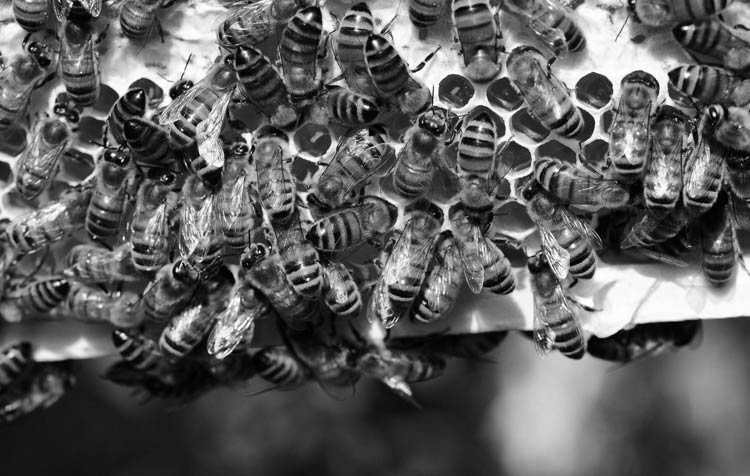 Why don't vegans eat honey? 10 reasons why honey is not vegan

Wondering why vegans don't eat honey and if it's even a vegan food? Then you've come to the right place! In fact, honey is one of the foods that the answer to the question "vegan or not?" is apparently rather in the gray area. Especially because honey is usually not consumed every day, bees are small animals about which we know rather little and because at first glance, no animal must die.

In this article I would now like to explain the second look and show you why honey is not vegan. Let's go!

10 reasons why vegans do not eat honey

As you will see from the following points, there are both ethical and environmental reasons to avoid consuming honey and bee-produced products such as beeswax.

1. because bees make honey for themselves

Honey is the food of bees. The substitute food they receive from beekeepers, usually a sugar syrup, unfortunately only makes them more susceptible to diseases, as important nutrients are missing. Of course, there are also beekeepers who deliberately leave their bees large portions of the honey they produce themselves. But since there is no certainty of this, vegans simply do without the consumption of honey altogether.

We hold: Bees are able to produce their own food by repeatedly swallowing and regurgitating the nectar from flowers and other plants. Loosely speaking, honey is therefore bee vomit.

2. because the production of honey is exhausting

The process of extracting honey from a hive is extremely stressful for bees. 12 worker bees need about their entire life to produce one teaspoon of honey₁ that we devour in a second. Bees are, proven, intelligent, sentient creatures that can feel emotions such as fear or joy. Vegans therefore avoid honey for ethical and moral reasons.

3. because we manipulate the animals for the honey

One thing in advance: not every beekeeper is so brutal. But what I am describing now is a common practice in beekeeping or "honey production". The queen bee is fixed in a holder and instrumentally fertilized with the semen of 8-12 crushed drones. (below in the embedded video you can also see this in practice).

Your will both wings separatedso that it remains in the hive - the other bees stand by it and also stay. This prevents the colony from swarming out into several new colonies. The latter would drastically reduce honey production in the respective hive and make it uneconomical.

4. because honey bees are exploited in mass breeding

"Why are vegans not allowed to eat honey?" - we should replace the word "may" with "want". Because veganism is above all a question of one's own moral values - and since animals are exploited in honey production, vegans choose not to eat honey.

Honey bees are considered in our society mainly as farm animals - comparable with cows, pigs and chickens in the Factory farming. Honey bees are artificially inseminated and selectively bred for our benefit. Their gene pool is thereby reduced - and the risk of disease increased. Diseases that can also be transmitted to bumblebees or wild bees.

5. because bees are injured and die

In modern beekeeping, animals are constantly injured or killed. The reasons range from poor insulation of the hive, a lack of food to parasites.

Before the cold winter period, often even the entire bee colony is killed, because it would be uneconomical to feed the animals through the cold season. One method of doing this is to douse the hive with gasoline and set it on fire. Others, for example, to gas and fumigate them or drown them in soapy water. Cruelty to animals is thus also an essential factor for the fact that vegans do not eat honey or for the fact that honey is not vegan.

6. because honey is not very healthy

Honey is not vegan, nor is it particularly healthy. It consists mainly of calorie-containing fructose and glucose - i.e. fructose and glucose. Besides weight gain, dental problems and increased blood sugar levels can also be the result of excessive honey consumption. Apart from its content of magnesium, calcium and some other nutrients, honey does not differ significantly from the conventional sugar that we humans consume. Honey is therefore a "pleasure" rather than a "health" product.

7. because there are plant-based alternatives

Honey can be substituted for most purposes in a relatively simple way that is consistent with veganism. Here I have listed some examples that make it much easier for vegans to do without honey:

This selection confirms that we do not depend on the consumption of honey - not even for the taste. With maple syrup or agave syrup, two particularly popular and delicious, plant-based alternatives are available.

Can you think of any other vegan alternatives for honey? Then feel free to drop me a comment with your ideas!

8. because wild bees are important for biodiversity

Most of us know that bee populations are declining worldwide and this is a major driver of the Species extinction is. However, this does not apply to the bred honey bee - their population continues to increase because we want to eat honey. But this does not help the wild bees. On the contrary. Rising honeybee populations endanger all other, wild bee populations through disease transmission and the fight for nectar and pollen - and because of the consequent declining Pollination performance also a large number of other animal and plant species and entire ecosystems. "Saving bees" therefore also means "saving ecosystems"!

9. because bees are living beings and not commodities

The queen bee, which is essential for honey production, can be purchased online. A search on eBay - for just under 30 euros it's yours - and the wings have even already been clipped. Whole hives are available online and can be conveniently ordered by home delivery.

As small as the animal may be - for me this is a sign that we humans have gone too far and need to take a new path. And it is also a major reason for all other vegans not to eat honey.

10. because wild bees are essential for the survival of humans

As the number of honey bees increases, the number of wild bees, which unlike honey bees, are essentially responsible for pollinating and thus also for the growth of plants, is dwindling. Plants that we need to survive. So the decline of wild bees ultimately threatens our food security and thus also our survival - and overall the continued existence of species-rich nature as we know and need it.

"Once the bee disappears from the earth, man has only four years to live. No more bees, no more pollination, no more plants, no more animals, no more humans." (Albert Einstein)

You can find more inspirational sayings at Animal welfare quotes.

Vegans do not eat honey because they do not have to

With this video, I would like to conclude by showing you pictures from the field that support all the above reasons why vegans don't eat honey. Commercial breeding does not mean the preservation of bees - it does the opposite and endangers the survival of many other plant and animal species, including ourselves. We do all this unnecessarily to be able to eat honey - even though there are plant-based alternatives.

I hope that with this article I was able to clarify for you why vegans don't eat honey. If you want to do something for the conservation and protection of wild bees, then be sure to check out my post about the bee friendly garden in and plant wildflowers. Have fun with the implementation!

PS.: More insects also automatically ensure more birdsong in the garden. At Create bird friendly garden learn how to enjoy more of it in your own green in the future. Or enjoy learning, too, why vegans do not drink milk.