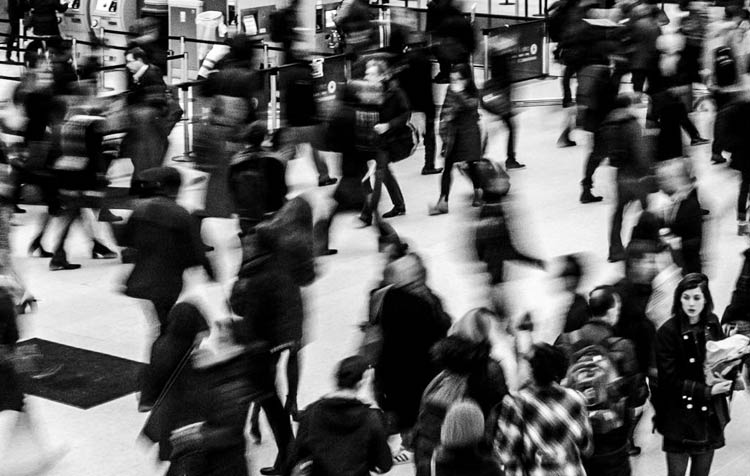 Overpopulation - All about global population growth

Is Overpopulation really one of the Environmental problems of our time? And is our earth overpopulated at all? Questions over questions. As I write these lines, almost 8 billion people live on our earth. In 1950, there were still 2.5 billion people and initial forecasts estimate that 100 years later there will be 10 billion. So in 100 years, the world's population has quadrupled - no wonder today's overpopulation brings with it a rat's tail of consequences and leaves our planet gasping with strain. Perhaps the exponential growth of the world's population is not a direct environmental problem - but it is a social problem with serious consequences for our environment.

In this article I would like to show you facts, causes, consequences and possible solutions to the issue of overpopulation on earth and question whether the world population will continue to increase at this rapid pace.

Basically, the term Overpopulation the condition that the number of people on earth exceeds the carrying capacity of the planet. This means that people are consuming more of the earth's natural resources than could be replenished in the same time. However, the concept of overpopulation is to be distinguished from the concept of World populationwhich simply describes the number of people living on Earth at a given time.

Phases of the demographic transition

The 4-phase model of demographic transition describes the typical population development of a country. Every country on this earth is in one of the following phases:

In Germany, like most other countries in the world, we are already in the final phase.

To support this article factually, I will give you some statistics on overpopulation.

2.6 people per second?! Why is the world population actually growing at this insane rate? The reasons are hard to imagine for us in Germany due to the low birth rate - we have healthy food on our plates every day, compulsory schooling, strictly controlled hygiene standards, a highly trained doctor on every corner, as well as secure jobs and state protection in the event of an emergency. Unfortunately, not all people enjoy this privilege - and this is also the root of the global population explosion.

Low levels of education and the associated lack of sex education are the main causes of high birth rates in developing countries. The age structure there is also very young - for example, in Uganda or Niger, around half of all people are under 15 years old.₇ In combination, these reasons lead to an increase in unwanted and very early childbirths. Many women there have more children than they would like because they lack contraceptives or their partners forbid them to use them. In Africa, for example, one in two women cannot use contraception, even though she would like to.₈

Children in developing countries are often born into a vicious cycle of malnutrition and poverty. A weakened body is susceptible to disease and less able to perform. Children are less able to concentrate at school - all of which reduces their later career opportunities. Nevertheless, the opportunities exist, which is why many women want to have many children.

In many regions of the world, the desire to have more than two children is therefore also due to lack of old age security and high infant mortality extremely large. Especially in developing countries, people are dependent on their children in old age. In the Democratic Republic of Congo, a woman has an average of six children, and further north in Niger, there are almost eight offspring. In comparison, in Germany there are about 1.5 children per woman - yet here we are also feeling the consequences of global overpopulation in the form of increasing migration.

When medical care, hygiene and also the food supply improve in a developing country, the logical consequence is a higher and longer life expectancy due to a declining mortality rate. At the same time, however, birth rates still remain high - and the population explosion occurs in the second phase of the demographic transition. However, this will not always be the case. With the third phase, the birth rate will then also fall, so that there will even be a population decline and later an equilibrium of the population in the respective country.

Now we know why the world population is growing too fast - but what are the consequences for nature and our coexistence on earth? Here I would like to give you some examples, which at the same time underpin that our environment, as well as our global society is facing a massive challenge.

Every second, 2-3 people come into the world who need food and drinking water, consume energy and want to drive a car and own a smartphone. But where are all the raw materials that are necessary to meet this demand going to come from? From nature, of course - and that is exactly why global population growth is not free of ecological consequences.

And these are just a few prominent examples. So our environment suffers particularly from the fact that with every second that passes, two more people come into the world.

But it is not only our nature that suffers - the burden on ourselves also increases with each additional person on earth. Here are some examples as well:

These are by no means all the consequences. Work at low wages in dusty factory halls is also on the increase - the cost savings are creating a problem like Fast Fashion in the first place.

The causes and consequences of rapid population growth have now become clear to us. But to what extent can we ourselves, and especially politics and business, help to slow it down?

What can I do myself?

In your everyday life, you actually have some opportunities to have a direct impact on population growth. Especially by becoming part of the solution to the biggest challenges of our time.

Living a conscious and sustainable life

Simply consume more consciously and live a little more minimalist. In the linked, separate article, I give you many more tips for a sustainable everyday life.

There are many great people on this planet who are actively raising awareness in developing countries every day and working to provide better educational opportunities for young women. In addition to making your everyday life as sustainable as possible, you can also support the following organizations with a donation.

Can you think of other organizations that are doing valuable outreach and should be supported? Then feel free to leave me a comment below this post.

Additional question: Is it sustainable to simply not have any children yourself?

This question is asked by many people who already have a strong awareness of nature within them. In my opinion, however, it is precisely these people who should have children. After all, they are very likely to raise them to be environmentally aware - in line with their personal values. Nevertheless, in Great Britain the Birthstrike Movement in which people give up their desire to have children because of the impending climate catastrophe. I consider the approach to be very commendable, but for the reasons mentioned above, unfortunately, it is also not effective. At Do not have children for the environment you can learn more about it.

What must politics do?

Of course, politicians and decision-makers around the world also have a duty. Because the reasons for the strong population growth are as varied as the necessary countermeasures.

In short, policymakers simply have to promote cultural change.

Can the growth of the world population be stopped?

"We are sawing with all our might at the branch on which we are sitting." - that is a frequent tenor in discussions about the increase in the world's population. In my opinion, this is one of the greatest challenges in human history - but a solvable one.

Indeed, the key in the fight against overpopulation and the increasing number of the world's population lies in education. Because education is the most effective weapon to create change in the world. Awareness-raising plays the biggest role in this, and every individual can influence this - if not personally, then at least via social media. Because it has never been easier to reach and positively influence millions of people within a few minutes than it is today.

Do you have any suggestions or questions about the article? Then feel free to leave me a comment. Of course, you are also welcome to share the article on the Internet.

PS.: Have a look at the Environmental protection blog by. In addition to population growth, you will also learn more about the other major challenges of our time - for example, about the Climate change.