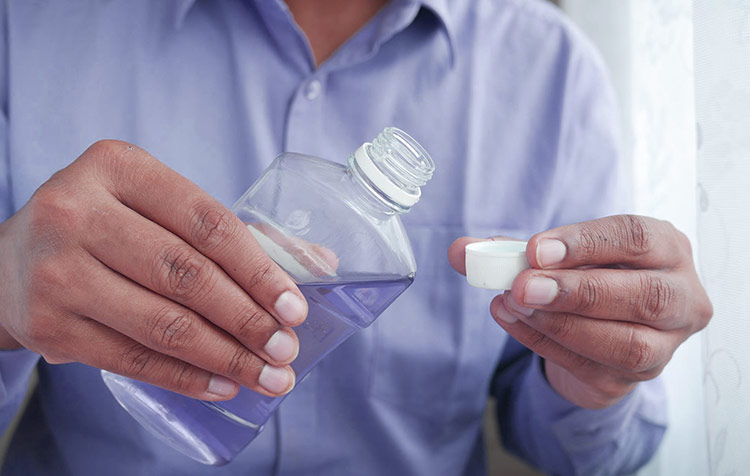 In the future you would like to Make mouthwash yourself and make your own natural mouthwash? No problem. In this article, you'll learn how to replace the traditional, chemical mouthwash from the plastic bottle with a sustainable, healthy, homemade mouthwash. Let's go!
Here is another short Table of contents about the article:

Why make mouthwash yourself?

We would be here in the Do It Yourself Blog no instructions and Recipes share with you, if you would not bring a lot of benefits. Here I would first like to give you some reasons to make your own mouthwash.

The quite ordinary mouthwashes from the trade are stuffed with chemical substances. By the way, also with alcohol. For children, these mouthwashes are therefore nothing at all and therefore one more reason for's make mouthwash itself. While the alcohol in the conventional mouthwash prolongs its shelf life and also has a disinfecting effect, chemical ingredients such as chlorhexidine are supposed to kill the bacteria that cause mouth rot, e.g. on the tongue, teeth and gums. But the chemicals in mouthwash are dangerous if used regularly, as it also attacks beneficial bacteria, which can cause tooth discoloration and other dental problems despite the mouthwash. (Recommendation: Make toothpaste yourself)

By buying the well-known mouthwashes from discount stores, you produce a lot of plastic waste that consumes natural resources and may end up as a Plastic waste in the environment ends. The bottle is usually plastic, the lid of course, and often there is even a plastic film over the lid to ensure that the bottle is opened for the first time. What is the alternative? You can make your own mouthwash, this whole Avoid plastic waste and thus conserve natural and limited resources.

3. make mouthwash yourself and save money

Heard correctly: Making mouthwash yourself is ultimately cheaper than the mouthwash from the discount store. In the trade you get both expensive, as well as cheap mouthwash & mouth rinses in Plastic packed. But we have reasonable doubts about the quality, regardless of the price. And why is the homemade mouthwash now cheaper than the mouthwash from the store? Because you can use the individual ingredients, which I will explain in a moment, in the long term and for the production of your own mouthwash already small amounts of e.g. the oils are sufficient. So making your own mouthwash is worth it!

4. decide for yourself what goes in

You certainly know the jungle of technical terms on the back of mouthwashes and other care products from the drugstore. Polyethylene, chlorhexidine and co. - what is it all about? If you make your own mouthwash, you alone decide on the fresh, natural ingredients and not some large corporations that want to bring products to the customer as profitably as possible and put health and environmental aspects in the background.
If you do want to buy your mouthwash or mouthwash at the drugstore, just to be safe you should check the App Codecheck Use it. With it, you scan the barcode on the mouthwash directly in the supermarket and find out within a second whether there are any questionable ingredients in it. In the appealing article you also get more information about Microplastics in cosmetics.

The ingredients to make mouthwash yourself

We do not want any chemical ingredients in our care products that are hazardous to health and the environment. That is why there is the Natural Health Blog. We use only toxin-free, natural ingredients for the homemade mouthwash, which you can also get plastic-free. Here is an explanatory list of ingredients that are suitable for DIY mouthwash:

To make your own mouthwash, herbs are particularly suitable. And you can Herbs & other plants also easy to grow yourself. The following herbs are effective, for example, against bad breath, for a fresh feeling in the mouth and also for a quick healing process after dental surgery:

The mint has a high menthol content and thus has a very refreshing and cooling effect. It also ensures that the airways are cleared again and is therefore the ideal ingredient for the homemade mouthwash. The mint oil, which can be seen even when lightly rubbing the leaves, has an antimicrobial and additionally concentration-enhancing effect.

Eucalyptus for an antispasmodic effect

The oil of eucalyptus contains cineol, which frees our oral cavity from tightly adhering mucus. In addition, eucalyptus oil has a cooling, antibacterial and antispasmodic effect. Eucalyptus is one of the best herbs to make your own mouthwash.

Cinnamon is one of the best herbs for homemade mouthwash or mouthwash due to its anti-inflammatory, refreshing and antibacterial effect. It reduces bad breath and prevents infections, inflammations and mouth ulcers.

Cardamom is wonderful for your homemade mouthwash, as the herb is effective against bad breath and also cough. Caution: Cardamom loses its effect very quickly and should therefore be consumed without long storage times.

If you have inflamed gums, fennel is also an herb that belongs in your homemade mouthwash. Fennel has an anti-inflammatory effect and promotes a fast healing process.

Chamomile against inflammation and for fast healing

The herb has an anti-inflammatory effect and, like fennel, helps you prevent gum inflammation or speed up the healing process and relieve mild toothache. Chamomile is also ideal for gargling when you have an irritated throat.

Anise has an expectorant effect

The essential oils of the anise herb act against bad breath and also expectorant and decongestant. Depending on the type of anise herb, it can also accelerate the process of wound healing. You can get anise seeds in a jar here*.

Sage - the all-purpose weapon in the mouthwash

Regular chewing sage leaves after meals makes teeth cleaner and whiter. In the herb has antibacterial, disinfectant and anti-inflammatory effects and is an ideal addition to any homemade mouthwash are.

Tea tree oil is also a perfect addition if you want to make your own mouthwash. Because tea tree oil has an antibacterial effect and is especially useful for those who have gum problems.

Clove oil not only kills bacteria and prevents bad breath, but also has a strong anesthetic effect. Therefore, you should use clove oil especially for your homemade mouthwash if you often complain of mild toothache.

Other ingredients for mouthwashes

Water for your DIY mouthwash

The water we use to make our own mouthwash should be boiled and lukewarm or colder and come from pipes that are as lime-free as possible.

Maybe you have already read the article about the various Soda applications read From Baking soda you can not only Make toothpaste yourselfbut also make your own DIY mouthwash. Soda or sodium hydrogen carbonate neutralizes the acid that attacks your tooth enamel and has an antibacterial and odor-neutralizing effect. Ideal prerequisites as an ingredient for our homemade mouthwash. You can get sodium bicarbonate here*.

A DIY mouthwash should of course also taste pleasant. Birch sugar is a natural sweetener that has a good taste and, unlike household sugar, has a caries-inhibiting effect. A tasty addition if you want to make your own mouthwash. You can get birch sugar here*.

Tin fluoride (stannum fluoratum) can be added to your DIY mouthwash if it is also to inhibit tartar. You can get the homeopathic remedy in any pharmacy.

2 variable recipes for making mouthwash yourself

Now that you know all the right ingredients for your DIY mouthwash, I want to give you the best instructions & recipes for making your own mouthwash. With the following recipes should be something for everyone:

1) Make your own mouthwash with baking soda & birch sugar

First, I'd like to share with you a classic recipe for a homemade mouthwash with baking soda & natural birch sugar and all the information on how to make it.

If you're good, you'll get there, in the spirit of the plastic-free life, completely without plastic packaging.

Now you still need to know how to bring together the ingredients to make a homemade mouthwash. Proceed as follows:

More information about this DIY mouthwash

I use this mouthwash because it is effective and really uncomplicated and plastic-free producible. Every morning and evening I apply it for 1-2 minutes and then spit it out again. With the amount from the ingredients list above, you should be able to use the mouthwash for about 2-3 weeks. You can vary the essential oils according to your needs and personal taste.

You can also get without Baking soda and Birch sugar make a really effective mouthwash yourself. How to do it, I show you with this DIY mouthwash recipe:

You now know what ingredients you need - let's get them together:

The application also works here as above. Apply in the morning and evening for 1-2 minutes and spit out. This mouthwash should also last about 2-3 weeks.

Make mouthwash yourself? No problem!

I hope you have fun trying it out and I look forward to your comments with questions, suggestions and experiences.

PS.: You can now make your own mouthwash - but what about a natural, homemade deodorant? In the article Make deodorant yourself I present you 3 variants with which you can make your own deodorant. Have fun!