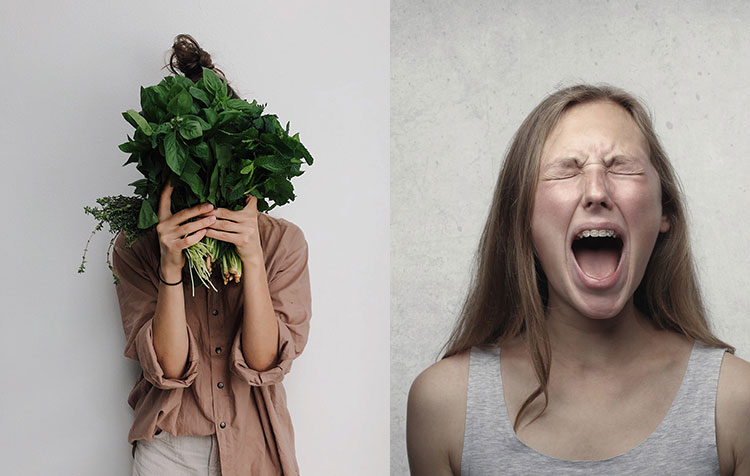 The 10 most annoying phrases vegans have to listen to - and short, quick-witted answers

Looking for weird and annoying phrases vegans have to listen to? Then you are exactly right here! There are really countless Prejudices against the vegan lifestyle. But some sayings of meat eaters remain for a long time in the memory and in the respective situation smoothly in the throat stuck. Simply because he is illogical - and the more often he comes to one's ears, the stranger and more annoying he becomes, even if he is not meant badly as a rule, of course.

In this article, I would like to introduce you to ten of these strange statements that vegans like me just can't hear anymore. In addition, you get a quick-witted, appropriate answer to each of them with the hand. On it goes!

Notice: In my free E-book "All arguments against veganism" I refute you all typical prejudices opposite the vegan way of life. Here I would like to focus however above all on the sayings, which come meat eaters particularly fast over the lips however already directly with the hearsay rather nonsensically appear.

1. you do not know what you are missing!

It is yes not like you were born a vegan - I have personally enjoyed eating meat, eggs and dairy products for a large part of my life. I don't give up these products because of their bad taste, but for ethical, ecological and health reasons.

And since it is countless, delicious, flavorful, plant-based foods and recipes there, I miss thereby also nothing. On the contrary, vegan cuisine is incredibly diverse, which is why the saying would be much more appropriate as a vegan compared to meat eaters.

You will regret not eating meat anymore! Also that is a similarly-merkwürdigen statement, which Veganer more often to hear get. But with a balanced-vegan nourishing way one regrets according to experience only not to have begun earlier with it.

The term "veganism" has been around since the founding of the Vegan Society in 1944, and the daily increase in the number of vegans in Germany and around the world underscores a positive trend.₁ And I agree that you don't have to follow every trend. But the Veganism is not a trend, but a animal-friendly, environmentally conscious and health-promoting movement, which above all stands for values such as justice, non-violence and freedom that will improve social coexistence.

The theory that you can only Lettuce, grass and dusty hay and thus the usual feed of rabbits, cows and other animals from the Factory farming would eat, is probably something like the classic among the sentences, which vegans can no longer hear.

But actually eat the Billions of innocent "farm animals" bred for performance the food away from the people. Problems like the World hunger would have long since ceased to exist if all people consumed plants directly and avoided the "detour animal".

4. from lettuce shrinks the biceps!

This sentence has its roots in the song of the same name by the rapper Kollegah - but in the meantime it has taken on a life of its own, so that many vegans have to listen to it regularly. The Pale skinny vegan stereotype really stubbornly persists. But as a rule, vegans don't constantly nibble on lettuce leaves like rabbits - instead, they consciously eat a high-protein diet. Pumpkin seeds, peanuts, oatmeal, chickpeas, lentils, beans and Whole wheat pasta are just a few examples of Vegetable protein sources.

Tip: All about Proteins in vegan diet you can read in the linked article!

5. then what should the massai eat?!

Another very strange saying to justify (often not even demanded) one's own meat consumption is the Appeal to the fact that not everyone can eat a vegan diet. But just because an East African ethnic group with a semi-nomadic lifestyle may not eat exclusively plant-based meals does not make it so in our Western world.

On the contrary: we are spoiled for choice in the supermarket and buy the meat from animals packaged in plastic containers. Often it's just a reach further to the animal-free, plant-based alternative, which is why the strange initial question is absolutely illogical.

6. i eat vegan sometimes, so you can eat meat sometimes too!

As laudable as it is that meat eaters are also increasingly trying out plant-based dishes, it is also annoying for vegans to hear this phrase. On the one hand, because a large part on the plate of mixed-food meals (side dishes such as vegetables) is vegan anyway. And on the other hand because a vegan diet not consciously at the expense of other living beings is based. Vegans renounce the consumption of animal products not out of taste, but as a rule out of deepest, ethical motives.

This sentence could well have crossed my lips during the first 30 years of my life, as I assumed that meat, eggs and dairy products would simply disappear from my plate with a plant-based diet, leaving only lettuce leaves. But fortunately you can continue to eat burgers, pasta and pizzabut with animal-friendly ingredients. Nowadays, this is even easier than ever before.

Just one week after I started, I noticed the Variety of vegan recipes and new cooking ideas that should make it incredibly easy for everyone to not have one, or at least clearly Eat less meat.

Tip: The Veganuary for example, is a great chance to try the plant-based diet for a month.

8. and when will you stop again? It's just a phase anyway!

Many mixed foodists expect that if you're a new vegan, you'll only be motivated for a short time anyway, then realize how complicated it all is - and abandons the project. Perhaps also because they would expect it of themselves that way.

But choosing a vegan lifestyle (if ethically motivated) is not a short-lived thing that you quickly put aside. It is a decision for lifethat comes from the bottom of the heart. A decision to bring one's own values back into harmony with one's own actions. Because "I love animals, but pay money to have someone kill them for me". is a contradiction in terms.

Tip: Me the Dominion" film made vegan because it shows the background of factory farming. At vegan documentaries I will introduce you to these and other helpful documentaries in more detail.

9. plants have feelings too!

In fact, this is a saying that vegans have to listen to particularly often. But to elevate animals and plants to an identical, mental level is, of course, completely absurd.

Animals have a central nervous systemjust as we humans do. Plants, on the other hand, do not have this at the current state of research - but show biochemical reactions, such as turning to the sun, which make some believe that a world of feelings slumbers in them.

However, even if at some point it should be found out that Plants have feelingswe humans should all the more stop eating meat. Finally, for the Feed from cows, pigs and chickens countless quantities of plants are grown and "killed".

It is always surprising when people see a fish consider such an inferior beingthat they do not even call its body parts on the plate meat. But fish are also Animals, have feelings and a will to live₂ - and therefore naturally do not belong on the plate in a vegan diet.

Tip: These sayings were not particularly philosophical. You can find inspiring counterparts from famous people under Vegan quotes. Have fun!

What vegans have to listen to...

Yes, the aforementioned sayings can be really annoying, illogical and also extremely strange. But finally vegans and vegetarians can contribute by loose and logical debunking to the fact that they are to be heard ever more rarely.

I hope I've been able to introduce you to some frequently heard, entertaining statements here. Can you think of any other strange phrases that vegans have to listen to? Then I look forward to your comment!

PS.: You want to know, why i live vegan? In the linked article, I now explain all the main reasons. Have fun!