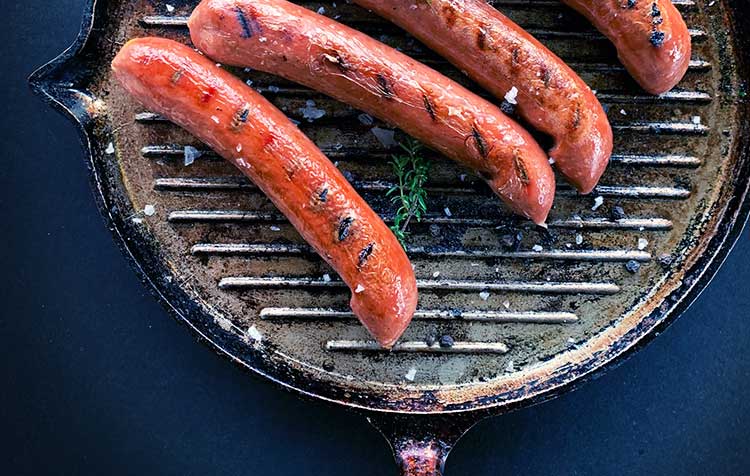 Why do vegans eat meat substitutes? The reasons for food that looks and tastes like meat

Why do vegans eat meat substitutes? These days, supermarkets and restaurants have plant-based alternatives for everything from classic steaks, schnitzels, burgers, meatballs - even vegan köttbullar! Many people instinctively wonder why vegans don't just go back to eating the delicious meat instead of preferring products that look, taste, and even smell like meat. But the existence of the vegan meat substitute has far more than just culinary reasons.

The reasons for meat consumption in our society

How would you answer the question "Why do you eat meat?" answer? Most people's answer includes at least one but often all of the following reasons:

For me, too, these reasons were good enough to eat meat and other animal products for 30 years of my life. I loved the taste of meat - and that hasn't changed to this day. Nevertheless, I don't eat it anymore, ever since Dominion film have seen.

Tip: Anyone who wants to better understand vegans or live vegan should definitely watch this film. But there are also countless other Documentaries against factory farming.

Meat tastes rather boring by itself -. Roasting and Wort provide the flavor we love. That's why tofu is such a great, neutral alternative that can be seasoned and fried any way you like until it tastes as much like what we like to eat as possible. Some of the most valuable seasonings to mimic the taste of meat as closely as possible include. Kala Namak, marjoram, smoked salt, coriander and classic Pepper.

Since it's not that difficult to create a meat-like flavor, plant-based alternatives are now available for all conventional supermarket meat products. There are vegan gyros, vegan bockwurst, vegan chicken nuggets and even vegan shrimps. But why exactly do vegans now look for a suitable meat substitute? What are the reasons for giving up classic meat?

At Reasons for veganism I explain it to you again completely in detail. Here I would like to provide you now at least the essential arguments of vegans for the preference of meat substitutes and plant foods over the counterpart from body parts of animals in the short version.

Why I prefer meat substitutes over meat as a vegan?

On the one hand because Animals sentient beings are those who do not want to die. The decision for a vegan lifestyle is above all a decision against the Animal exploitation and Cruelty to animals. Since we don't need to eat meat to survive, eating animal flesh is not even necessary. I love animals - but at the same time I pay for them to be killed. This behavior did not fit my attitude - so I changed it and became vegan.

And secondly, because about seven plant calories are needed to produce one animal calorie.₁ To reduce the World hunger to defeat, we should therefore Directly consume plantsinstead of feeding billions of animals to eat their meat later. Don't you think it's kind of funny that we have enough food to feed 56 billion farm animals every year₂ but that at the same time more than 800 million people in the world have to starve?₃

The land-intensive Factory farming is one of the biggest drivers of the Climate change and the main reason for the Deforestation of the rainforest. But the "modern" animal husbandry is also particularly resource-intensive. More than 15,000 liters of water are needed to produce one kilogram of beef alone.₄ Meat doesn't just grow on trees. It demands victims - This includes not only animals and other people, but also our planet. Good reasons to swap meat for meat substitutes, don't you think?

For most people, ignorance stops at their own health. There is no longer any doubt that meat consumption leads to a increased risk for common diseases such as type 2 diabetes, high blood pressure, strokes, cancers and obesity.₅ In addition, the Antibiotic load of meat products from factory farming result in the formation of serious resistance of one's own body to drugs. And in the meantime, the thought of eating meat from animals that have suffered also disturbs me. As a vegan, I therefore prefer to eat plant-based meat substitutes rather than products from the traditional meat industry. Not least because there is no health necessity for eating meat.

For whom the vegan meat substitutes are actually intended

Indeed, the vegetable meat substitute is basically designed for this purpose, Make it easier for non-vegans to switch to a completely vegan diet. Because many people associate this directly with the renunciation of quality of life, taste, traditional and familiar and therefore do not dare to take the step to veganism. But since the plant-based and just as delicious counterpart for schnitzel, burgers and chicken meat is only a handle away on the supermarket shelf, the conversion becomes much easier.

Why do vegans eat meat substitutes? For an easier transition to the plant-based diet

So in the end, plant-based meat substitutes ensure that no one has to do without the benefits of meat products. At the same time, they lead many people into a more sustainable, ecological and conscious way of life in the innermost harmony with their own personal values.

So now you know why vegans eat meat substitutes. Do you have any questions or suggestions? Then I look forward to your comment.

PS.: That vegans only eat overpriced meat substitutes instead of meat, thus counts to the typical Prejudices against vegans. In the linked post you'll get to know even more of them! Have fun!