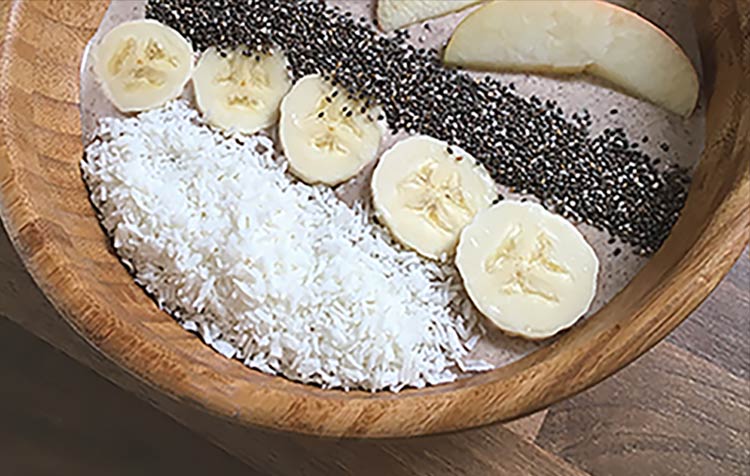 You can find detailed instructions for sprouting buckwheat in my contribution to the buckwheat sprout muesli.
Put all the ingredients in a blender and puree them. It's best to start with a little less vegetable milk and add a little more later if you like the buckwheat breakfast porridge more liquid. However, if it's already too runny for you, you can add some chia seeds again for a slightly thicker consistency. If you don't have any vegetable milk at home, you can also prepare the breakfast porridge with a little water. To mix I can recommend this blender*. The blender from Philips has a glass container with a capacity of 2 liters and is finished with very little plastic.

Buckwheat sprouts contain much Vitamin B1, B3 and B6, as well as the minerals Magnesium, Iron and Zinc. The healthy grain is an excellent source of Carbohydrates and Protein and contains only a moderate amount Fat.

The buckwheat breakfast porridge base recipe remains the same and is refined by various spices. Especially well suited for this:

It's best to simply use spices according to your taste. I like the combination of cocoa nibs, coconut flakes and cinnamon particularly well, because the spices complement each other. I use about 2 tablespoons of cacao nibs, 2 tablespoons of coconut flakes and 1 teaspoon of cinnamon. If you like, you can add some fruit to the buckwheat breakfast porridge, although this is not an optimal combination for digestion.
Alternatively, you can also use chia seeds (you get online and plastic free here*) instead of flax seeds, because they have a similar composition and act similarly in the recipe. Or you can simply use chia seeds as a topping for your breakfast porridge.

With the vegan buckwheat breakfast porridge recipe you can bring some variety into your breakfast and at the same time fully enjoy the health benefits of sprouted buckwheat. Due to its composition and variability, the dish is also perfect for fasting and can be eaten several times a day. In the morning you can have the buckwheat breakfast porridge sweetly flavored with cinnamon and a few coconut flakes and at lunchtime hearty with pepper, a little salt and fresh or dried herbs depending on the season.

I especially like this recipe because it is so absolutely simple and really requires very little. I always have buckwheat, flaxseed, chia seeds and spices at home and start a new sprouting process with buckwheat every day. So I can very quickly make the buckwheat breakfast porridge and start the day healthy.

Have fun trying it out! Do you have any questions or suggestions? Then leave me a comment below the post.

P.S.: By the way, another ideal fasting dish is kitchari from Ayurveda cuisine, you can find my contribution here. More articles on the topic healthy food you can find here. And if you want to learn my best tips for vegan living. look here.