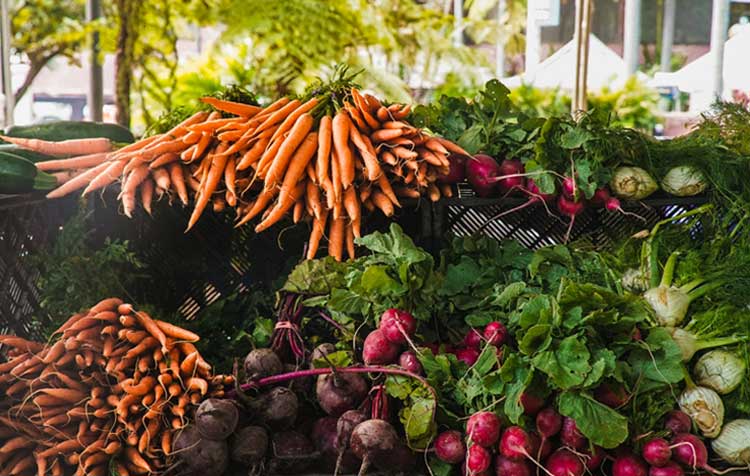 Regional and seasonal - 10 advantages you should know about

Why should you buy regional and seasonal? To a sustainable lifestyle also includes paying attention to the origin and season of fruit and vegetables. In the case of animal products such as meat, eggs or milk, regionality also plays an important role in terms of sustainability. The term refers to the purchase of goods that are produced and also consumed in the same region. Seasonality is about acquiring goods that can be produced in the natural and seasonal conditions of agriculture. But what exactly should motivate us to consciously look for such foods in the supermarket or while strolling through the weekly market?

In this article, I would now like to give you the most important advantages of "regional and seasonal" - and thus a clear answer to this initial question. Let's go!

In advance, here is a brief overview for you:

When an apple is transported by plane or cargo ship from New Zealand to Europe and then still transported by truck to its destination, avoidable Greenhouse gas emissions and particulate matter pollution, which can Climate change and last but not least the Air pollution accelerate. Avoidable because you can also prefer the apples that come from your own region.

Tomatoes - as an example - have their season in this country from April to October. If you buy them in December, for example, for domestic cultivation are either Energy-intensive greenhouses or for foreign cultivation (for example in Spain). large quantities of water the climate problem and, last but not least, the Water shortage tighten.

Mega-corporations worth billions do not exactly stand for transparency and solidarity-based, fair and sustainable action. On the contrary: Origins, production methods and use of chemicals are often disguised - and in marketing they become Greenwashing gripped.

Of course, the goods of a large corporation can also be regional and seasonal. But in combination with organic and in organic farming products, you are making a significant contribution to ensuring that Increased support for smaller, sustainability-minded, handmade, transparent and not mass-produced businesses, self-employed and employees. be

Or can you imagine that, for example, a cheap wine brand trimmed for maximum sales would make you think about the Work of a winemaker informed on their own farm? Fortunately, there are now many winegrowers and farmers who offer their clientele consciously and transparently participate in the production of their goods. let

Ultimately, they also benefit financially, since the customer-side Appreciation - for example for the natural wine - rises accordingly. Also due to the growing demand for honest, natural products, today even job postings such as "consultant for organic farming" on job fairs to advertise.

By giving preference to regional foods, you ensure that the Economy strengthened in your region will. Your well-earned money benefits the people around you. Your environment and you ultimately benefit from a larger range of jobs, an improved infrastructure or more attractive leisure activities, for example.

A major advantage of seasonal produce is that it is usually available at lower prices. This is due on the one hand to the fact that no transportation costs which would otherwise be passed on to the consumer, of course. However, the lower costs are all the more due to the fact that a particular foodstuff is in the middle of its season. plentiful is. Only at the end of the season does the price rise again, as the supply decreases. So in the end you can also save money through sustainability.

Large amounts of nutrients and phytochemicals make in the respective season of course - and mostly without the use of pesticides - grown goods so healthy. Since the transport routes are short, chemical agents and plastic films can also be dispensed with in order to protect the To preserve food for as long as possible.

Regionally produced potatoes are natural not automatically pesticide free. In this regard, you should also additionally make sure that they were produced organically without the use of synthetic chemical pesticides and fertilizers.

6. no chemistry in the environment

You should also buy regionally and seasonally because it protects the environment in many ways. That less greenhouse gases The problems caused by greenhouses and long transport routes have already been explained. Also the Air and soil quality is promoted by the short distances and mostly ecological cultivation methods. Due to the fact that the conditions for. cultivation in the season are ideal, also falls the Pesticide use in the fields lower out, whereby, for example, the Insect mortality reduced will.

Good to know: Regional and seasonal does not automatically mean environmentally friendly. For example, meat from cattle can also come from your region. Because of the high land consumption for meat products and the generally resource-intensive, mostly mass animal husbandryHowever, the product is anything but sustainable.

By buying regionally and seasonally, we also ensure that we have something to eat on our plates in the long term. A very decisive advantage based on the fact that by consuming climate-friendly food, as few insect species as possible (such as the bee in particular) become extinct, the pollinate cultivated plants and allow them to grow as a result. The reduced use of chemical fertilizers and pesticides in regional, seasonal organic agriculture also helps to protect biodiversity and thus our food security.

Tip: A conscious diet also supports the Fight against world hunger. In the linked article you can find out what else you can do in your everyday life against global famine.

We humans are after all Creatures of habit who find changes in life difficult. It often takes a little nudge to try new dishes. To consciously cook regionally and seasonally, Opens a door to these very meals and recipe ideasthat you might never have tried otherwise. For example, how about some summery chickpea zucchini pancakes with a cashew sour cream - or a delicious smoothie bowl with tasty pumpkin seeds in the colder season?

Through the short transport routes and the ideal, natural conditions freshness and long shelf life can be guaranteed. Since the fruits and vegetables don't have to be flown or shipped halfway around the world, they can also be harvested at their optimal ripeness. At this point, the nutrient and flavor content is as high as possible, so you can taste the difference compared to foods harvested early. To me, that's a major advantage of regional and seasonal produce.

Other people also wonder why you should actually buy fruits, vegetables and other produce regionally and seasonally. But not everyone knows the advantages and reasons, from better taste, to lower prices, to environmental and climate protection.

By consciously paying attention to regionality and seasonality in your purchases, you are setting a positive example for other people and can Actively shape the future-oriented rethinking in our society.

Shopping regionally and seasonally for a better world

Regional and seasonal goods are cheaper, healthier, and more environmentally and socially friendly. So what's to stop you from picking up a weekly calendar and looking at the country of origin in the fruit and vegetable section?

Finally I would like to give you further articles that should help you to implement them in your everyday life:

Do you have any questions, tips or suggestions about the benefits of regional and seasonal foods? Then I look forward to your comment.

PS.: You want to know more about the greatest environmental problems of our time and their solutions? Then feel free to check out the corresponding post next. Have fun!