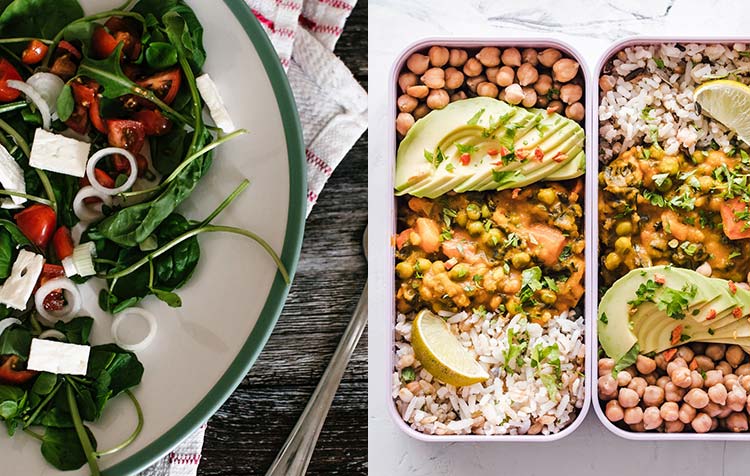 Diets - What are the different types and trends of diets?

Want to learn more about the most popular diets? Then you've come to the right place! The food culture of our society is extremely diverse. Accordingly, the countless nutrition and food trends that have emerged, for example, from ethical, health or ecological motives, are also varied. But which forms and variations are there actually in our meals and generally in the culinary kitchen?

In this article I would like to give you an overview of the jungle of diets and introduce you to the most important types and trends. Let's go!

What motivates people to eat a certain way?

Before we move on to the individual diets, I would like to briefly explain why there are so many different types and trends in our food culture. After all, we could theoretically just eat whatever we feel like.

It is mainly the following motives that drive people to adjust their eating habits:

Those who eat an omnivorous (i.e. mixed diet) diet, Eats everything and does not limit himself. Whether fruit, vegetables, milk, dairy products such as cheese and yogurt, whole grain products, beef, fish, fat or sweets - everything may be consumed. Accordingly, the casual designation of the "omnivore" certainly applies.

Vegan*s Consume only plant-based food and consciously avoid animal foods such as meat, eggs, milk, cheese, cream or honey - as well as animal ingredients such as gelatin or carmine. If mixed foodists are called "omnivores", the term "herbivores" definitely applies to vegans.

The vegan diet is one of the most consistent diets - especially as it is driven by ecological and health motives, but above all by ethical ones. Ultimately, one wants to avoid the use of animals or animal products in all areas of life.

Vegetarians consume mainly plant-based but also animal-based foods. They pay attention to this, no "products" from killed but only from live animals to eat. Therefore, for example, they eat foods such as milk, dairy products such as cheese and yogurt, eggs and honey - but refrain from eating meat.

However, there are different types of vegetarian diets:

Tip: The pure plant-based, vegan diet is basically a very strict form of vegetarianism. Did you know, however, that there is an essential Difference between pure plant-based diet and veganism is there? I explain it to you in the linked article.

Notice: Flexitarians can usually be recognized by the fact that they are only very little and then only "good" meat consume. In my opinion, it is one of the most unspecified and, as the name suggests, flexible diets.

Those who subscribe to pescetarianism, Although the meat of animals of the same temperature is not used in their own meals, such as cows, pigs or chickens - but likes to eat fish. Eggs, milk, dairy products and other seafood, such as crabs or shellfish, are also allowed by many pescetarians. In simple terms, pescetarians are vegetarians who eat fish and other marine animals.

Frutarians feed exclusively on plant parts that are naturally already dead or have been given away by a plantwithout having to destroy it. The frutarian or also fructarian nourishing form speaks both animals and plants a kind-fair life to and is thereby in the theory even more consistent than the vegan nutrition. The motivation behind this extra step is mostly ecological and not ethical.

Good to know: According to current scientific knowledge plants have no feelingsThey do not have a central nervous system like animals.

As a climatarian you eat in such a way that as few greenhouse gases as possible are emitted for your own food, which the Environmental problem of climate change drive. For this reason, preference is given to sorted, regional and seasonal foods that are predominantly plant-based, since the CO2 equivalents emitted for meals decrease the lower the proportion of meat.₁

Carnivores feed exclusively on animal tissue, as well as of water. Somewhat more softly interpreted, animal products such as eggs, butter, cheese or dairy products may be eaten in addition to (often raw) meat. This dietary form of pure meat eaters is still largely unexplored and often motivated by this to function well as a provocative counter-trend to the vegan diet.

Lactose is a sugar and a natural component of animal milk, such as cow's milk, sheep's milk and goat's milk. With a lactose-free diet people refrain from consuming animal milk and all animal dairy products. The decisive, health-related reason for this is usually a pronounced lactose intolerance of the affected person.

Good to know: A food is considered lactose-free if it contains less than 0.1 g of lactose per 100 g.

Raw food is food that is not cooked, baked, fried, pasteurized or otherwise heated before consumption. Accordingly, in the raw food diet may be Eaten exclusively uncooked food be. Raw foodists eat mainly vegetables, fruits, leafy greens, nuts, seeds, mushrooms and herbs - but also raw fish and raw meat, depending on personal preference.

The dietary form of Clean Eating allows only As far as possible natural, plant and animal foods - so no artificial additives, no industrial sugar, no sweets, no fast food and no ready meals. Cooking is fresh, i.e. as natural as possible. All "fresh" foods are therefore permitted - such as fruits and vegetables, organic meat, legumes, yogurt, milk or whole grains.

In the Slow Food movement one eats and enjoys his food above all slowly, consciously and regionally. Predominantly plant products are consumed - but animal foods are also possible. This healthy and relatively sustainable form of nutrition is a countermovement to the rather unhealthy, environmentally harmful and globalized fast food. The motivation behind it is, among other things, to reduce the To be more aware of hunger and the feeling of fullness and to increase their own well-being.

The kosher diet is based on the Jewish dietary commandments of the Torah, a part of the Hebrew Bible. In kosher cuisine, for example, no shellfish, insects or pigs may be eaten. Allowed are only mammals that have four feet and cloven hooves - and chew the cud. Animals must be completely drained of blood before being eaten, according to Jewish beliefs, which is why the animals are slaughtered. This means that they are killed without stunning and then bled.

According to the Muslim faith only those foods are eaten and drunk that are "halāl" (translated: permitted) according to the Islamic dietary laws. These include, for example, eggs, fruit and vegetables, cow's milk and also the meat of slaughtered chickens, cattle or sheep. However, the consumption of alcohol and pork is forbidden ("harām").

The low carb diet trend is all about, to consume significantly fewer carbohydrates than usual. Often people eat this way to lose weight in a healthy way - Accordingly, a low carb diet involves consuming less pasta, cereals, bread, potatoes, sugar, rice and juices, for example. Basically, however, the food trend is rather a long-term dietary decision to generally stay fit, healthy and slim.

The Paleo diet trend is based on all the foods that were already available in the Stone Age. Accordingly, especially cereal products, legumes, sugary foods, as well as milk and all dairy products are avoided. Meat, fish, fruits and vegetables, nuts and seafood, however, may be eaten. The goal is usually to live healthier through the change of diet to Paleo and the combination with a more active everyday life.

Beegans eat a plant-based diet as much as possible. However, insects and insect products, especially honey, are allowed. Simply explained, beegan products are vegan foods that may also contain honey or insects.

Tip: About the Insect consumption I have also written you a detailed article. Look gladly times purely!

As a pudding vegetarian you eat a meat-free diet, but increasingly unhealthy foodssuch as fast food, convenience products or sweets. So it's more the ecological and ethical, rather than the health motives that drive pudding vegetarians.

Of course there are also pudding vegans! Because also the vegan diet is not automatically healthy. After all, you could, for example, also eat vegan only chips and cola.

Dietary forms pursue different goals - but many can be combined!

Comparisons or hostility between the various "followers" of the diets are superfluous. On the one hand, because everyone should decide for themselves what foods In harmony with one's own values and desires are. And secondly, because most of the types and trends presented here can be combined well with each other. For example, you can be a lactose-free, kosher vegan who prefers the concepts of Slow Food and Clean Eating.

I hope that with this article I could give you valuable information about the most popular diets in our society. Do you have any questions, tips or suggestions? Or can you think of other types and trends around our meals? Then I look forward to your comments!

PS.: You want something Eat less meat or vegan life? In the linked articles you will get a lot of tips. Good luck!