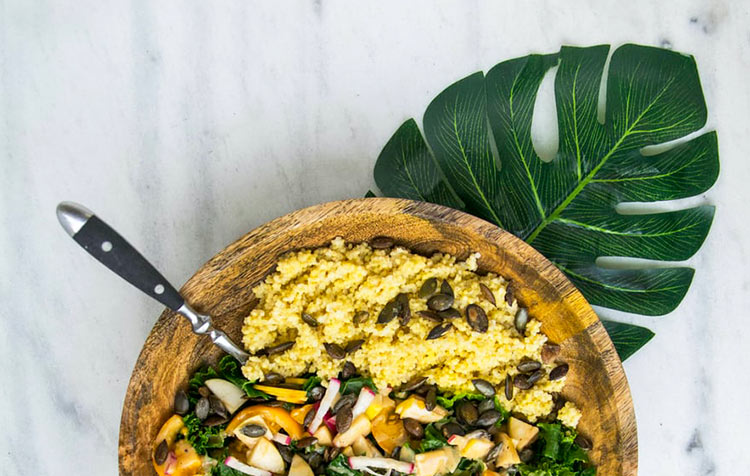 What is the difference between vegan and plant-based? If you are asking yourself this question, you are absolutely right here. Veganism is an often discussed and for many also a really confusing topic. It is not made clearer by the fact that veganism and plant-based nutrition are not the same thing.

In this article, I would therefore like to briefly define both and then show you what exactly the difference is! Let's go!

Veganism is a life choice

To find out the difference between vegan and plant-based, we should first look at the pillars of veganism.

Vegans do not want to be responsible for the fact that Animals tortured and killed. Therefore, they completely renounce the consumption of animal foods, such as cow's milk, meat or honey - and also on Fur and leather, visits to zoos, and cosmetics that involve animal testing. These three overriding reasons are crucial for vegans:

Ethics definitely play the biggest role in veganism - but are supplemented by ecological and health motives. But anyone who was once vegan for ethical reasons will probably remain so forever. In the article "Why live vegan?"I have explained all the reasons again in detail.

General definition: Veganism is an attitude, as well as a way of life and nutrition, which emerged from vegetarianism. Vegan living people either avoid all foods of animal origin or they generally reject the utilization of animal products and exploitation of animals. (Source Wikipedia)

Eating only a plant-based diet is a nutritional choice

Now we know what is behind veganism. So the only thing missing is a definition for its counterpart.

Terms such as "plantbased", "plant-based" or "vegetable" are usually used to describe a plant-based diet. They are also often used in scientific studies, since moral values do not play a role there. However, the terms are not defined by law, which is why they are Both a purely plant-based diet and a predominantly plant-based diet describe

Often, a "plantbased diet" primarily means the balanced consumption of plant-based foods. The focus here is definitely on health, even though ethics and environmental protection also play a role for many people who eat a purely plant-based diet.

What is the difference between vegan and plant-based?

Vegan and plant-based both basically mean a plant-based diet without animal foods. However, veganism goes beyond nutrition, which is why the terms "veganism" and "plant-based diet" do not always mean the same thing.

Vegans live, as best as practically possible, free of animal suffering - and eat a completely plant-based diet. This includes not only food, but also cosmetics, clothing and even visits to the zoo. People join veganism for ethical, environmental and health reasons. Above all, ethics play a major role for vegans.

People who eat a plant-based diet consume exclusively, or sometimes only predominantly, plant-based foods. The Motives for plant-based nutrition are basically more related to health aspects. The focus is on the balance of the diet. Depending on the personal attitude, however, ecological and ethical reasons can also play a role here. However, the own health is in the foreground - animal rights are only a subordinate or no motive.

When someone says "I have for a week vegan tried out", he actually means the Vegetable diet. Veganism, on the other hand, is not something you try for a short time - you are either for or against the exploitation of animals. Either one participates in it, or not.

In short: the difference between vegan and plant-based lies in the personal motives. Veganism is a way of life, while the pure consumption of plant-based food is a form of nutrition.

Know and use the difference between vegan and plantbased

Some people have a negative image of vegans. Often even without having tried to eat vegan and sometimes without knowing even a single vegan personally. These prejudices cause them to immediately switch off when they hear the word "vegan" - even if they actually agree with the basic values of veganism, not to harm any animals for their own lifestyle.

Sometimes I prefer to say "plant-based" myself when I sense that someone has such a negative image of vegans. This makes it much easier and more factual to start a conversation.

Do you have questions or suggestions about the difference between vegan and plant-based? Then just write me a comment.

PS.: In the Vegan Blog you will learn everything you need to know about the vegan diet. You definitely get a good start with the article about vegan life.