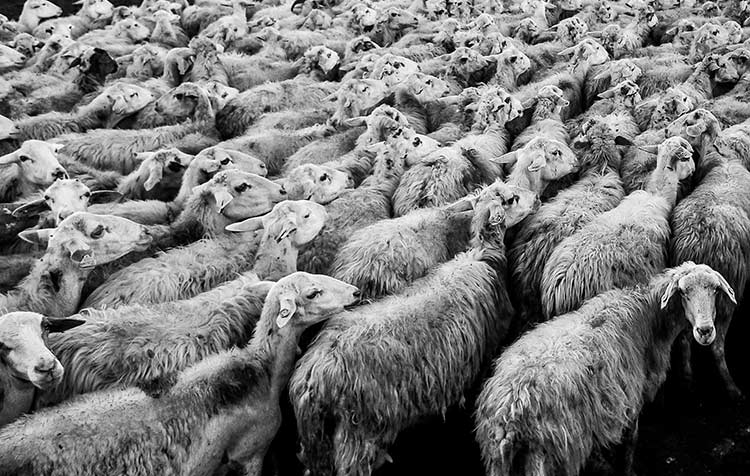 Factory farming - what is it actually?

Do you want to know more about Factory farming experience? Then you've come to the right place. Cows and pigs on lush, green meadows - that's what we want. But even though this rural idyll can still be seen on many product packages - it is far from reality on most fattening farms. The animals that nowadays produce meat, milk or Fur are unfortunately only high-performance machines in factory farming.

In this article I would like to introduce you to everything you need to know about factory farming. From the definition, to facts and figures, causes and consequences, to the things we can do in everyday life against the problem.

Since the post has become a bit longer, you can find here a clearly arranged Table of contents:

Tip: If you could use some inspiration in fighting for animals, take a look at the Most Effective Animal Welfare Quotes.

What is factory farming?

The goal is to produce as many animal products as possible at the lowest possible cost. The purpose is, among other things, the industrial production of meat, milk, eggs, leather and fur. In our society, factory farming tends to be rejected. However, it is massively supported by consumer behavior.

Notice: Those involved in factory farming prefer to use the terms "intensive animal husbandry" or "modern animal husbandry". Whether this form of husbandry is really modern and should be modern, you can make up your own mind here.

What animals are being mass farmed in the first place?

We have certainly all seen pictures of cows, pigs or chickens in factory farms. But which animals are actually basically kept in this way? Here is a brief overview:

Why factory farming is a problem and subject to criticism

The problem and justified criticism rests primarily on ethical and environmental pillars. Here are some Disadvantages of this form of intensive animal husbandry:

Raising animals in factory farms at top speed is not in line with human values. Animals are emotional beings. In turbo-housing, they can neither live under their natural environment nor follow their original instincts.

Tip: There are certain Tools of factory farmingwith which the animals are adapted to the industry. In the linked article I present them to you, so you can make yourself a picture of it.

Why do people still keep animals in factory farms?

Despite the many problems, there must be a purpose to factory farming somewhere, right? So that this is not lost, you will find here the few advantages of intensive animal husbandry:

It may all be cheaper, but the price compensation is ultimately paid mainly by the animals. And also our environment and thus we humans have to fight with heavy consequences. More about this in a moment.

To get an understanding of the scope of the problem, statistics on factory farming are tremendously important. Here are some facts to go with them:

Basically, the causes of factory farming are explained quite simply. Logically, of course, they are partly accompanied by the already mentioned advantages. Here are a reasons for the existence of animal breeding at maximum speed:

Effects and consequences of factory farming

From the definition to the problem and its facts to the causes, we have now learned a little more about factory farming. But to what extent does this form of animal husbandry affect animals, the environment and us humans? Find out more here.

First, let me give you a picture of the impact on wildlife. Here are some examples of corresponding consequences:

Consequences for the environment

Factory farming also affects our environment in a very special way. Here you can find some examples of its ecological consequences:

Consequences for us humans

Of course, factory farming also has consequences for us humans, both economically and in terms of health. Here are some examples of this:

What can you do in everyday life against factory farming?

Just as simple as the causes are basically also the solutions in the fight for a species-appropriate and fair treatment of animals. Here are some solutions that you can use in your everyday life to make a statement against factory farming.

If you would rather hurt the mass industry of meat and not the animals themselves, then giving up meat is the best way to do that. It does not even have to be the complete renunciation. Even if you value the origin of meat more and only eat it once a week, for example, you are already achieving a great deal.

In the article Become a vegetarian you get the best tips for it!

Conscious meat consumption can already make a big difference. But if you avoid animal-based foods altogether, your impact in the fight for fair animal husbandry is even greater. For example, I have replaced classic cow's milk with oat milk - and I miss absolutely nothing in the ambiguous sense. In the same way, I now enjoy vegan cheese (almond-based) and cook myself sauce with vegan soy cream.

Here you get many simple tips for the start into the vegan life.

Reduce or stop consumption of products made from animal material

Whether it's leather shoes, down jackets, wool blankets or fur coats - if it's real animal material, it's highly likely that an animal had to suffer for it. As a consumer, you can counteract the underlying factory farming by consciously avoiding such garments.

I recommend you to consciously sustainable fashion to prefer. You can get more tips about this in the article about the so-called Slow Fashion.

Even if you find the switch particularly difficult, you still have another good option for dealing with meat in a more sustainable way. Fortunately, organic products are usually not from factory farms. Meat, milk and eggs from organic and preferably regional farms are then certainly a good alternative for you.

Of course, you can also make a big difference by financially or actively supporting organizations that are dedicated to the protection of animals. The people in charge stand up for the rights of animals every day.

You can learn more about this in the article about the best animal welfare organizations.

We are so incredibly well connected these days - it would be a shame if we didn't take advantage of it! On the many petition portals today, you can always start an appeal or a signature list that should change a grievance in our society. In this way, for example, you can campaign for stricter laws to protect livestock.

You can learn more about this in the detailed article about the Starting online petitions.

The pictures from this article are still relatively harmless. The impressions from films leave their impact much more impressive. If you want to know even more about factory farming, you should definitely watch the following documentaries, learn from them and share your knowledge with others:

Not only by watching stark images in documentaries, but also by reading books about animals and how they are kept, you can educate yourself and ultimately others about factory farming. Here are some books you should definitely read:

Question: Are there any other documentaries or books that might have opened your eyes? Then feel free to write a comment.

Factory farming is no longer in keeping with the times

Of course, this is my personal opinion. But at the latest after the embedded video, everyone who considers factory farming to be contemporary should question their opinion on it. After all, we are cutting down rainforests in order to breed animals all over the world with them at high speed, cutting off parts of their bodies so that they do not injure themselves due to the stress in cramped and daylightless cages, and administering antibiotics to them so that they have any chance at all of surviving. Factory farming may only be called "modern animal husbandry" because it functions in a profit-oriented manner - and not at all because it is in keeping with the times.

What is your opinion on factory farming? And do you have any questions or suggestions about the article? Then I look forward to your comments.

PS.: Do you want to know more about the current challenges of our society? Then definitely take a look at the article about the biggest environmental problems of our timewhich are also accelerated by factory farming.

₆ Forum Moderne Landwirtschaft e. V.: Are the animals eating away our grain? (As of July 2016). https://www.moderne-landwirtschaft.de/fressen-die-tiere-uns-das-getreide-weg. [09.08.2019].