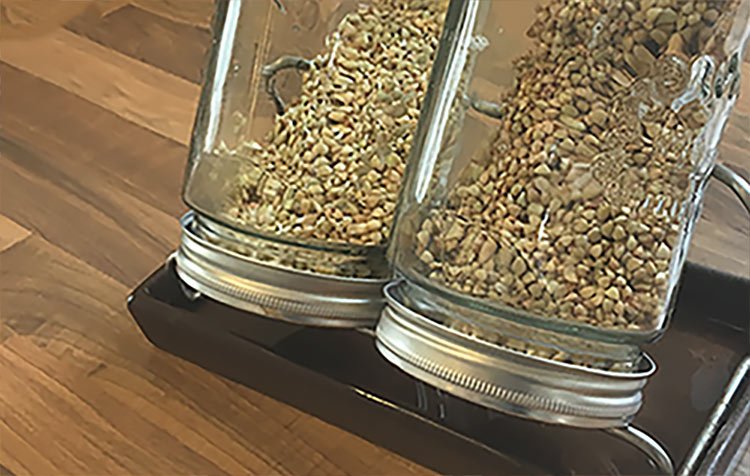 Do you already know buckwheat? In this post, I'll show you what buckwheat is and what health benefits buckwheat brings. I also give you a gluten free and vegan buckwheat muesli recipe and a guide to the Buckwheat germinate along the way.

What exactly is buckwheat?

Buckwheat has nothing to do with wheat or cereals, but is a knotweed plant. Originally from Asia, buckwheat is especially popular in Russian cuisine and is used there for many recipes. Buckwheat is a so-called pseudocereal and therefore gluten-free. Consequently, it is an excellent alternative to wheat for people with gluten intolerance or people who are trying to avoid gluten. Pseudocereals also include quinoa and amaranth, which are also suitable for a gluten-free diet.

In germinated form, buckwheat is particularly nutrient-dense and good for the body to absorb. Due to the high nutrient density, you should regularly add buckwheat to your diet. Food integrate, for example, in the form of a delicious protein muesli recipe with buckwheat germ.

Let's start with the buckwheat nutritional value. So what does buckwheat contain? Sprouted, and also cooked buckwheat have a very good macronutrient distribution. The Fat content is relatively low at about 2 %, the share of readily available Carbohydrates is quite high at 71% and also the Protein content of about 10 % can be seen. In addition, the buckwheat contains many B vitamins, much Magnesium, phosphorus, Iron, Zinc and copper. Among the essential amino acids, the proportion of leucine and arginine is the highest. So the buckwheat nutritional value is really decent and even improved by sprouting buckwheat.

In germinated form, the buckwheat germs are raw and do not lose any nutrients through cooking. The germination process also breaks down proteins into amino acids, making them easier for the body to absorb.
Furthermore, the starch is converted into easily digestible sugars (not to be confused with the unhealthy refined sugar!).

The vitamin content also increases during the sprouting process, thus increasing the nutrient density. Sprouted grains are therefore a real nutrient bomb. Another advantage, as already mentioned, is that buckwheat is suitable for a gluten-free diet. Not to mention, buckwheat is very filling. Especially at the beginning of a vegan diet or a change of diet, many people do not get as full as before. There the buckwheat can help out very well.

Tip: In the contributions "Vegetarianism Statistics." and "Veganism Statistics" you will find facts and figures about vegan-vegetarian nutrition and its impact.

How to prepare buckwheat

This is how you can prepare buckwheat when you need it fast. If you have a little more time and you can plan ahead, however, I recommend another way of preparing buckwheat. Namely, sprouting buckwheat. Why you should sprout buckwheat, you can find above in the benefits of sprouted buckwheat.

How to germinate buckwheat

To sprout buckwheat you need:

You can eat the buckwheat germ after just one day, but you can also germinate it longer. I recommend to let the buckwheat germinate for two to three days. If you have made your sprout jar a little too full, you should rinse the buckwheat more often on the third day, otherwise it can start to mold. Or you can eat part of the sprouts on the second day and the rest a day later. So sprouting buckwheat is super easy and just requires some advance planning. Buckwheat sprouts grow themselves has of course the advantage that your sprouts are completely fresh and not already several days in plastic packaging in the supermarket.

Peel the bananas and cut them into bite-sized pieces. Wash the berries, mix all ingredients in a bowl and enjoy! This is how easy my vegan buckwheat muesli recipe goes. To bring a little more variety into the vegan muesli recipe with buckwheat, you can also use other fruit, such as mango or pineapple instead of a banana. If you like it extra sweet, you can add dried dates and cocoa powder.

Other uses of buckwheat

Of course, you can also use buckwheat germ in a smoothie or as a side dish to a hearty meal. Due to the relatively neutral, slightly nutty taste of buckwheat, you can season it flexibly, so that it fits many dishes. With buckwheat, for example, you can also make delicious pancakes or add it to a salad as a satisfying topping.
If you puree the sprouted buckwheat you get a delicious breakfast porridge, you can find a recipe for it in my Contribution to the breakfast porridge. Or you can also Make muesli bar yourself and just add some sprouted buckwheat to have it a little crunchier.
There are also so-called soba noodles in stores, which are made from buckwheat. Unfortunately, I have not yet found plastic-free noodles. In any case, you can also bake a gluten-free buckwheat bread with buckwheat (flour) or replace part of the flour in other pastries with buckwheat flour.

For me, sprouted buckwheat is now an absolute basic food. I eat it almost daily in my muesli or as breakfast porridge. The buckwheat also harmonizes super with oatmeal, with which you can supplement the muesli. Due to the variety possibilities, the buckwheat muesli recipe is also not boring.
Because of the excellent nutritional value of sprouts and shoots, I have made it a point to incorporate them into my diet on a regular basis.

The buckwheat muesli recipe helps me to eat some of my sprouts right at the beginning of the day. I can only recommend you to eat sprouts and sprouts regularly, because they are really helpful for your health and energy.

For a vegan and / or gluten-free diet, buckwheat is an absolute basic, because it can be used in a variety of ways, has a great macronutrient distribution and a super nutritional value. So have fun trying out the recipe and bon appétit!

P.S.: If you are more interested in natural health and nutrition, check out our Health Blog or our Nutrition blog over! If you wonder what nutrition actually has to do with environmental protection, I also recommend you my contribution to nutrition and the environment.