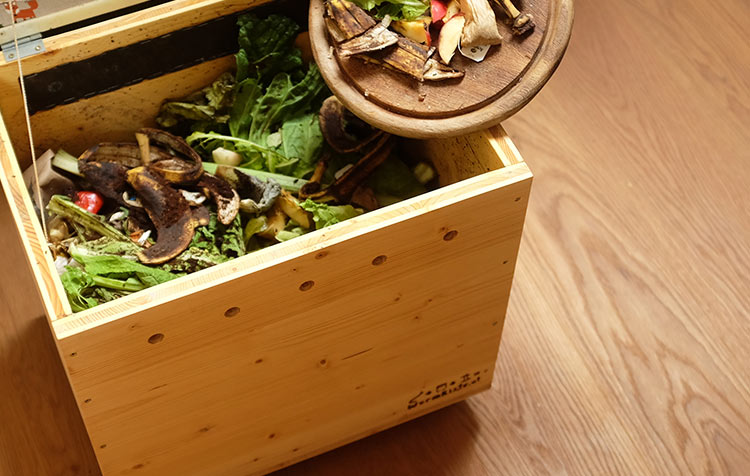 Constantly I have heard about the Worm composter for organic waste and now finally wanted to know to what extent worms can affect the Zero Waste Lifestyle can support. For this purpose, I met with David, the founder of Wurmkiste.at, who himself makes worm bins for household organic waste. In the following interview, you'll learn everything about the wooden worm composter - from the idea, to the worms and the functions and benefits, to the most frequently asked questions. Have fun!

Hello David! Who and what is behind the worm box?

The story started about 7 years ago when I went to Vienna to study. The problem then, and unfortunately still today, is that organic waste in the residual waste (see Separate waste correctly) lands. For me, this is an absolute no-go. By chance I came across the worm bin of a friend and of course built myself a worm composter. We were then 5 people in the WG and could recycle the entire organic waste with the help of earthworms odorless. I was thrilled and became more and more involved with the subject. About three years ago I founded a company with my brother Thomas (carpenter), with which we professionally build worm boxes out of wood and breed worms. We enjoy working with wood and living out our own values in the company.

How does the worm composter work?

A wooden worm bin can be thought of as a small compost pile (see also the article Proper composting) for the home. In it live and work between 500 to 2000 compost worms and consume the daily organic waste that accumulates in a household. The whole thing works odorless, of course, otherwise many people would have already sent back their worm bin 😀.

"A worm eats about half its body weight a day!"

It was very important to us that the worm box performs several functions at once. That is why it has become a seat stool. With wheels you can pull it out from under the table when extra space is needed. Sometimes a little funny idea that you sit on compost worms but most people find it quite funny.

Structure and function of the worm box briefly explained:

The worm bin has a waste box inside the bin, which helps to harvest the worm humus without disturbing the worms. Furthermore, the worm composter has a compartment in which the worm tea cup is located. By sliding out a panel (this covers the worm tea cup and can be customized, e.g. with buttons etc.) you can access the cup and the worm tea. Thus, worm hummus and worm tea can be harvested separately.

Worm tea briefly explained - worm tea is a liquid fertilizer that is automatically produced in the process of worm composting. It is practically like a magic potion for plants and helps suppress pests.

For the construction and handling of the worm composter we have some cool videos on our homepage:

What do the worms and organisms do with the organic waste?

Microorganisms (bacteria & fungi) work with compost worms (belong to the earthworm family) to decompose the organic waste. First, the MOs (=microorganisms) become active and break down the surface of the waste to multiply with the extracted materials. The compost worms have no teeth and suck on the fungi and bacteria. Thus, the MOs close up the organic waste and the worms consume the MOs as well as solid substances and generate valuable worm compost. Having been around for thousands of years, earthworm technology has been practically perfected. The end product worm humus is also called black gold.

What can go into the worm composter and what not?

Fruit scraps, tea bags, fruit, leaves (no nut leaves), newsprint (no glossy paper), cardboard, eggshells, coffee grounds (see previously still Coffee grounds application ideas), vegetables and bioplastics. They like it best when cut into small pieces, as this increases the surface area and makes it easier to utilize the leftovers. Furthermore, it makes sense to moisten some leftovers, such as newspaper (see Folding garbage bags from newspaper) or dry leaves. Dry material is not eaten.

Not allowed in Poisonous, hard to digest and dry things. Bones, chemicals, dairy products, cheese, citrus fruits, meat, glossy paper, a lot of cooked, marinated and salted food should not go into the worm bin. The compost worms and microorganisms would either take a very long time to break these things down or perish from them. They also don't like animal feces or cat litter.

How is the worm composter manufactured and delivered?

The worm boxes are built from ecological raw materials in a small workshop in Upper Austria. We obtain our raw materials as best we can from regional farms. In this way, we not only promote the regional economy and thus counteract the rural exodus, but also ensure that family businesses continue to exist. Furthermore, we cooperate with an integrative company, which enables people with disabilities to enter the job market. Every box that is lovingly handcrafted by us thus secures jobs. As an environmentally conscious company, we use only worm-digestible packaging material. So it's all plastic-free.

Can you sit on the composter or it smells too strong 😉.

Admittedly, having 1000 worms in your own home raises some questions. BUT a well-maintained worm bin smells pleasantly of forest soil. So grab a book, put it on the composter and make yourself comfortable. Convince yourselves at the best.

Why should everyone have a worm composter at home?

There are many reasons that speak for a worm composter. The most important ones we mention are:

Where can you get the worm composter?

The worm boxes are available ready-built or as a do-it-yourself set directly in our online store Wormbox.at - we send everything by mail even the compost worms. This is cheaper for the consumer because we do not have to rent different branches. Thus we can keep the quality high, which is of course a big concern for us. We want to show the possibilities of worm composting and offer a practical, user-friendly product with which one can easily reduce the amount of organic waste in the residual waste and thus the CO2 emissions. Furthermore, we also offer support after the purchase of the worm bin. There are nevertheless again and again unsettled questions and there it is good also times fast someone to call to be able. Already now about 3.200.000 compost worms live in the worm boxes of Wormbox.at and recycle approximately 320 tons of organic waste annually.

Thank you David! We wish you continued maximum success!

I have recently started using the worm box myself, initially as a test. The instructions are ideal, so I could not make any mistakes. The box stands with me in the kitchen and smells absolutely not at all. Previously, we always had a classic compost bucket, where unfortunately the fruit flies felt very comfortable. After some acclimation and testing time, I can say that my organic waste has actually been transformed into fertile soil, which I can now use for the Planting herbs and co. can use. I hope this interview gives you a new perspective on household worm composters. Do you have any questions, suggestions or your own experiences to share? Then feel free to leave me a comment below this article.

PS.: Learn in the article Reduce food wastehow you can avoid especially the organic waste already in its formation. Also the article Food longer shelf life will help you further. Have fun!