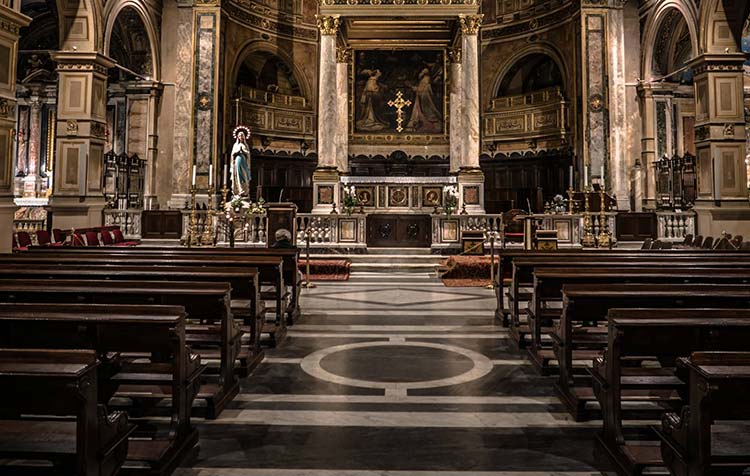 Veganism & Religion - Does God allow us to eat meat?

The link between Veganism and religion is an extremely sensitive topic. Not only because there are different views on it in different cultures and faiths. But also because the vegan life calls millennia-old behavior patterns into question. Sometimes even veganism itself is dismissed as a religion, if you personally consider the movement an undesirable bad habit.

In this article I would like to introduce you to the connection between veganism and religion so that you can form your own opinion about it:

Here I have first gathered for you some Bible passages that relate to eating meat and veganism. Evaluate for yourself whether the Bible and God prescribe the consumption of animals:

"The righteous has mercy on his cattle; but the heart of the wicked is unmerciful." (Proverbs 12:10)

"What do I care for the multitude of your sacrifices, declares the LORD? I am full of the burnt offerings of rams and the fat of fatted calves, and have no pleasure in the blood of bulls, lambs and goats." (Isaiah 1:11)

"Offer no more such vain grain offerings! The incense is an abomination to me! New moon and Sabbath, the call to assembly - sacrilege and festival assembly - I do not like it!" (Isaiah 1:13)

"Though you spread out your hands, I hide my eyes from you; though you pray much, I do not hear you, for your hands are full of blood. Wash yourselves, cleanse yourselves, put away your evil deeds from my sight. Cease from evil, learn to do good!" (Isaiah 1:15-17)

"To all the beasts of the field, to all the birds of the air, and to everything that stirs on the earth that has breath of life in it, I give all green plants for food. Thus it came to pass." (Genesis, 1, 30)

"In the kingdom of peace, a kind of earthly paradise which, according to the Christian conception, will be created after Christ's return, however, there shall then again be no bloodshed for the procurement of food." (Isaiah 11:6-9).

"Do not five sparrows sell for two pennies? Nevertheless, in the sight of God, not one of them is forgotten. (Luke 12:6)

"The wolf and the lamb shall feed at the same time, the lion shall eat straw like an ox, and the serpent shall eat earth. They shall not hurt nor destroy in all my holy mountain, saith the LORD." (Isaiah 65:25)

"Everything that moves and lives, that is your food; like the green herb I have given you everything. Only the flesh with its life, its blood, do not eat! But your own blood I will claim. From every animal I will claim it. And the life of man will I require of every other man." (Genesis 9:3-5)

Notice: Do you know of any biblical passages that indicate that God allows us to eat meat? Or others that point more in the direction of veganism for religious reasons? Then feel free to write me a comment.

In order not to refer exclusively to Christianity here, I would like to give you an overview of the meat consumption of individual religions and their followers.

Notice: Feel free to correct me in the comments if an error should have crept in here. Thank you!

Is veganism a religion?

Since veganism envisages renouncing all animal products such as meat, milk, cheese or yogurt and abandoning millennia-old traditions, the movement already comes across as a religion. A religion, however, also means a "devoutly worshipping recognition of his divine power determining all being". But if one means it with the Veganismus seriously, refers thereby not to a God - even if the Bible passages mentioned would underpin that even. As a vegan one would like to stop the exploitation of animals by humans and not support this in the own everyday life. Besides ethical motives, also drive a vegan for ecological, social and health reasons. an.

These reasons for veganism are not religious. Those who live vegan simply show that they do not want the things we give animals, for example, in the Factory farming for immoral reasons (habits, traditions, convenience or taste).

Notice: If it is not a religion - is the Veganism then only a trend? In the linked article you will learn why this is a future-oriented movement.

Argument: "God put animals here so we could eat them".

There is not a single doctrine of faith in which a God forces us to eat animals. He merely gives us the opportunity to eat them when the need arises. In the Stone Age, when people hunted mammoths, it was certainly necessary to eat animals and use their fur to survive. But today we no longer need to eat meat. We can live exclusively on plant foods and do not have to fear any negative, health consequences.₁ Therefore, it is also rather not morally justifiable before God if you still kill animals and they are. Or don't you think a loving God would prefer us not to kill his creatures when we don't have to?

Whether in the meat, dairy or egg industry, it is not just the killing itself that is questionable. It is also about the Cruelty to animalsthat innocent, sentient beings have to suffer just for our habits, our traditions and our tastes. No loving God would approveWe cut off the tails of pigs and gas the animals in gas chambers, we impregnate cows against their will and take their babies away from them, and we put male chicks through a shredder immediately after they are born, just so we can consume their meat, milk and eggs, even though we don't have to.

This is decisively underlined by these words from the Book of Genesis: "To all the beasts of the field, to all the birds of the air, and to everything that stirs on the earth that has breath of life in it, I give all green plants for food. Thus it came to pass." (Genesis, 1, 30)

In addition to the animals we needlessly torture, our meat consumption is also destroying the planet and many of its precious resources that God has provided for us. For example, growing soy for animal feed is more land intensive for about 88 percent of the Deforestation of the Amazon rainforest responsible.₂ The rainforests are the green lungs of the earth, home to a large proportion of all animal and plant species. It cannot be in God's mind that we destroy before His eyes what He has created. He also created us as empathetic beings. This is also the reason why we feel disgust or anger, rather than hunger or joy, when we see pictures of slaughterhouses. What do you personally think: do slaughterhouses look more like the work of Jesus or the work of the devil?

Tip: Look at the Dominion film to answer this question for yourself.

Personally, I would not even refer to the Bible to justify the mistreatment and dismemberment of innocent animals just to be able to eat their meat. But who does that, would have to follow then rather the Veganismus for religious reasons - and the own meat consumption terminated. Because the very beginning of the creation story testifies to a peaceful life and a peaceful mealthat God has provided for us humans. The violence against animals is not demanded.

Moreover, there is not a word in the Bible that says that we should cuddle with dogs and cats, but eat pigs, cows and chickens for no reason. These are merely cultural ideas and beliefs tied to traditions. So why choose violence, cruelty, suffering and murder when you have a compassionate, compassionate, fair, healthy and sustainable alternative?

I hope I could help you with this post! What do you think: does God allow us to eat meat? Feel free to write me a comment with your reasoning.

PS.: Besides the appeal to God, the consumption of meat is also often justified by the fact that the Man at the top of the food chain would be. Read the linked article to find out why this is not a logical argument.