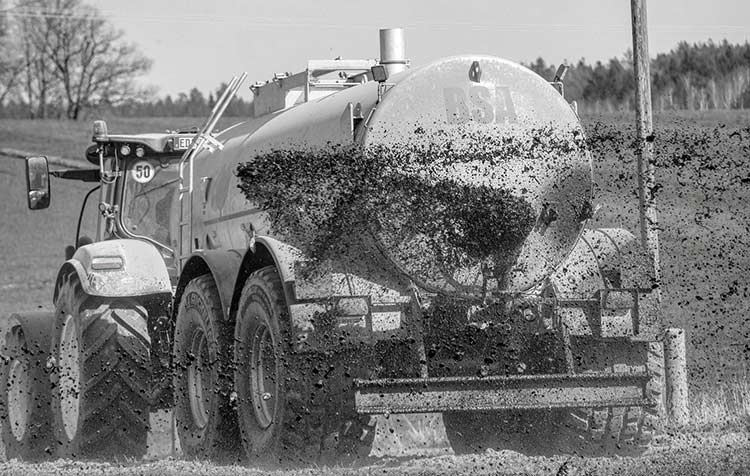 What is slurry, anyway? And is it really a natural fertilizer - or rather environmentally harmful manure? If you're looking for answers to these questions, you've come to the right place! Anyone who has ever had to drive behind a slurry tanker or walked past a freshly filled field knows the particularly stinky smell that the animal manure often preferred in agriculture brings with it. But apart from the stench, the liquid manure has other, clear environmental and health-hazardous disadvantages for humans, animals and the environment.

In this article, I want to give you everything you need to know about the masses of manure from factory farming. From the definition, to extreme statistics, to environmental hazards and pros and cons, to tips for a gentler manure footprint. Let's go.

Here is a brief overview in advance:

What exactly is liquid manure?

Since it contains nitrogen (N), phosphorus (P), potassium (K), boron (B), iron (Fe) and magnesium (Mg), farmers use it - in accordance with the recycling concept - primarily as a natural fertilizer and to increase the soil fertility of their fields, as well as crop yields. This often also applies to parts of the waste that are fermented in biogas plants for energy production and whose fermentation residues are subsequently distributed on the field. The latter usually happens with tractors, a slurry barrel, as well as a slurry cultivator, wide spreader or drag hose.

Depending on the type of housing and the amount of bedding (e.g. straw and hay) and water added, one also speaks, for example, of Thick or thin liquid manure, slurry, alluvial slurry or liquid manure.₁ Manure is more solid and usually also consists of straw, while the leachate from the manure pile is more commonly referred to as slurry.

Meaningful statistics on the subject of liquid manure

In order to get a feeling for the extent to which the production of the mixture of feces and urine from farm animals has already assumed, I would like to provide you with some facts and figures:

The advantages and disadvantages of liquid manure at a glance

Of course, there is one reason or another, Why the excrement of cows, pigs and other "farm animals" is spread on the fields in the first place - but also a lot of arguments in favor of stopping. Here I would like to put them together for you clearly and explain them briefly if necessary.

Can you think of any other advantages or disadvantages of slurry? Then feel free to write me a comment under this post.

Overfertilization: Is liquid manure really so harmful to health and the environment?

Manure is in small quantities actually a very good, natural and therefore also harmless fertilizerwhich provides the nutrients most important for plant growth. If this were indeed a closed-loop economy, farmers could grow feed, feed it, and reuse the excreta from their cattle, pigs, and chickens on the farm as fertilizer when growing animal feed.

But enough of the subjunctive! On the massive scale common today of factory farming, imported feed or synthetic fertilizers are used above all. In addition, there is so much manure that farmers have to get rid of it as cheaply as possible. Accordingly, far too large quantities are "disposed of" on fields and meadows, so that soils, groundwater, climate and not least our own health are threatened.

Dangers for the environment

The core of the problem is the horrendous number of farm animals, which simply produces too much manure. That is why nowadays larger amounts of the fecal-urine mixture available than can be absorbed by soils and plants in the first place. With this overfertilization, nitrogen inputs also increase and the likelihood that the soil will acidify. Nitrous oxide evaporates, causing the Climate change is significantly driven. In addition, ammonia is produced and contributes to the formation of fine dust or the Air pollution at.

The transport of liquid manure through Germany and Europe is also harmful to the climate. Farmers who have too much liquid manure available spend it in regions where it is needed. Since Holland, for example, has even less land available to "dispose of" the slurry, Germany actually imported 2.2 million tons from there in 2016.₆ This so-called Manure tourism naturally destroys the desired, regional nutrient cycle and blows emissions into the atmosphere in the most massive way.

Good to know: By the way, soybean meal - the protein-rich and therefore preferred animal feed in livestock farming - is also on the move a lot. To what extent animals fed Soy destroys the rainforestyou can read in the linked article.

Due to the excess manure on the fields, also increases the Nitrate content in groundwater.₇ The nitrogen compounds can be found, for example, in cultivated and fertilized spinach and, after consumption, form nitrosamines suspected of causing cancer in the body.₈ Nitrate in groundwater is of particular concern for infants.

Another health hazard is the contamination of groundwater with antiobiotics used in factory farming. This can result in Antibiotic resistance develop drugs that inhibit the effect of the drug when it is needed. Incidentally, the general public bears the cost of drinking water treatment, which is intended to prevent serious, health-related consequences.

These are just a few examples of how manure is harmful to health on an exorbitant scale. Basically, no one can expect to stay healthy in a sick environment. Accordingly, it is important to keep the resulting and ultimately also applied quantities as minimal as possible.

How do I reduce my "manure footprint"?

There is only so much manure because we humans consume animal products. If you want your lifestyle to cause less animal suffering and animal excrement, as well as relieve water bodies, ecosystems and the air you breathe, then you should make a Prefer plant-based diet, vegan life and simply leave the animals in peace. After all, we breed and fatten cows, pigs and chickens only to eat them, and their milk and eggs, later.

And what can farmers do? Farmers are not dependent on manure. Vegan organic farming shows how it can be done. Through green manuring and compost, crop rotations and the cultivation of catch crops, soil, groundwater and air are conserved while at the same time countless Plant and animal species preserved.

Liquid manure - A man-made hazard for humans, animals and nature

At least in the masses where manure from cattle, pigs and chickens is produced, slurry from livestock farming is a dangerous environmental toxin that endangers soil, air and groundwater - and thus both nature and our health. Added to this is the Moral question. This is because the animals usually have to live on hard, fully slatted floors in cramped barns, where their excrement falls into the slurry tank below. Animals, such as cows and pigs, which are actually quite clean creatures by nature.

Just by a vegan lifestyle, you would have from one second to the other, with all these problems no longer to do. Take a look at the following, further article an:

Do you have any questions, tips or suggestions? Then write me a comment as always.

PS.: You think on the road it is difficult to always find plant-based meals? In the post "Vegan in any restaurant - It's that easy". I'll show you why this is actually pretty easy. Have fun!

₈ Kilian Dreißig: Natural Fertilizer or Poison for the Environment (as of Nov. 18, 2019), available at https://www.vegpool.de/magazin/guelle-natuerlicher-duenger-oder-schaedlich.html. [13.01.2022].