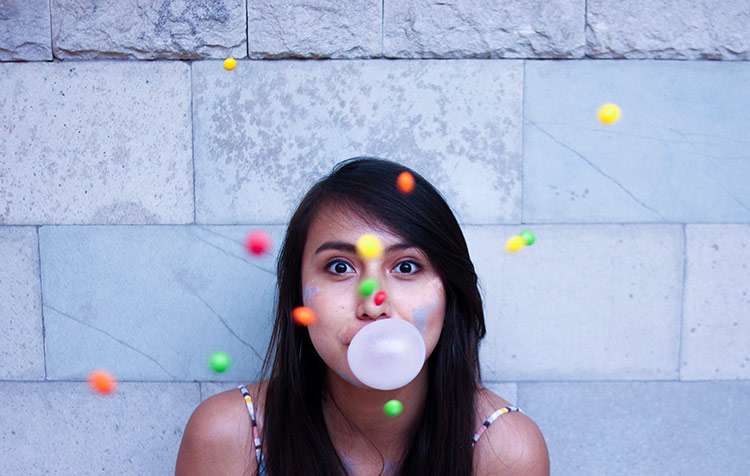 Plastic in chewing gum - Why we chew plastic

That Plastic in chewing gums was not necessarily to be expected. Even though the major manufacturers of chewing gum kept the ingredients of their products a secret for years, it became known at the latest after the results of a study by environmental physician Hans-Peter Hutter: Chewing gums contain Plastic - and we chew the plastic almost every day. Around 9.7 million people₁ have stated that they chew gum several times a week. Unfortunately, only very few people know that they are chewing on plastic.

Find out how much plastic is in chewing gum, whether it's a health hazard and what alternatives we have in this article.

What is chewing gum made of?

If a manufacturer does not advertise that it offers all-natural chewing gum, then it must be assumed that the gum contains plastic. In food chemistry, the main justification for plastic as a component of chewing gum is that it is No natural products available in the necessary quantities stand.₂

To take a closer look at the ingredients in conventional chewing gum, let's take a look at a Example an:

The ingredients of the chewing gum (Wrigley's Extra)

While all of the above ingredients can be clearly assigned, the term "chewing mass" rather undefined and can basically mean anything. The fact that manufacturers like Wrigley's insist that the composition of the chewing mass is a trade secret is unfortunately legal. This is because the chewing mass of the chewing gum is not an additive, but a crucial food ingredient.₃

Danger from plastic in chewing gum

How dangerous is chewing gum if it contains plastic? This question is probably floating around in your head right now, right?

In the following, I would therefore like to explain the effects of chewing gum on your health and our environment:

How does plastic in chewing gum affect our health?

Hutter's study has shown that people who regularly chew gum have a higher concentration of degradation products of the chemical softeners than people who do not chew gum. This is extremely concerning because plasticizers, or phthalates, have already been banned as components of toys in the European Union because they can cause hormonal changes. Plasticizers, for example, are also the reason why the sperm quality of humans has declined sharply in recent decades. This has been confirmed by toxicologists at the Federal Environment Agency. It should also be clear in any case that the high sugar content in chewing gum has health consequences.

Environmental problem due to plastic in chewing gum

Whether the chewing gum with plastic has immediate health consequences for us humans or not, we leave aside for a moment. What we can say for sure is that the plastic chewing mass causes considerable damage to the environment, since chewing gum is not biodegradable due to the plastic components and remains forever.

Unfortunately, because many people don't know what their chewing gum does to the environment, they simply spit it on the ground or into the water. I like to compare this habit with the problem of the Cigarette butts in the environment. Around 10 billion pieces of this gum are thrown on the ground around the world every day - and cigarettes unfortunately also contain plastic as well as many harmful substances. If around 9.7 million people in Germany alone chew several pieces of gum every week, you can imagine how many of them end up recklessly in the environment.

The problem arises, for example, when animals such as fish eat the plastic and in this way Plastic in the food chain gets. The same can happen if the chewing gum slowly turns into Microplastics in the sea decomposed. Spitting out chewing gum on the streets also causes major problems for the city cleanup. This is because cleaning requires a lot of energy and a lot of water.

Unfortunately, due to the plastic content, chewing gums are also suitable for Environmental problem and can ultimately have consequences for our health.

This includes, for example, the organic chewing gum from ChicZa.

According to the manufacturer, the organic chewing gum to 100% is biodegradable. This gives us a possible alternative for the conventional chewing gum with plastic. You can get the chewing gums for example here*, but unfortunately not without plastic packaging.

I have basically decided not to chew gum anymore. Because I can never be 100% sure whether plastic or other harmful substances are contained or not. And if I am sure, the packaging creates plastic waste again.

Should we continue to chew gum with plastic?

As may have been noted in this article, I generally prefer not to advise you to chew gum. At least until you can safely judge 100% of the ingredients. Finding gum without plastic is difficult but not impossible. However, as studies have also shown, plastic particles can also get into the gum through the packaging. To be on the safe side, especially when it comes to plastic in chewing gum, you should use the best possible plastic free life strive for.

In the article Hidden plastic in everyday life you'll get to know even more products where you don't necessarily expect plastic.

Do you have any questions, tips or your own experiences with the plastic in chewing gum that you would like to share? Then I look forward to your comment.

PS.: In the article What is microplastic? you will learn everything about the small plastic particles that are hidden everywhere in our everyday lives and especially in the sea.

PPS: If you want to learn more about plastic-free everyday life, you can check out my new Download e-book Get rid of the trash for free or here the Complete the 30 Days to Zero Waste online coursewhich leads you step by step to significantly less waste in 30 days.