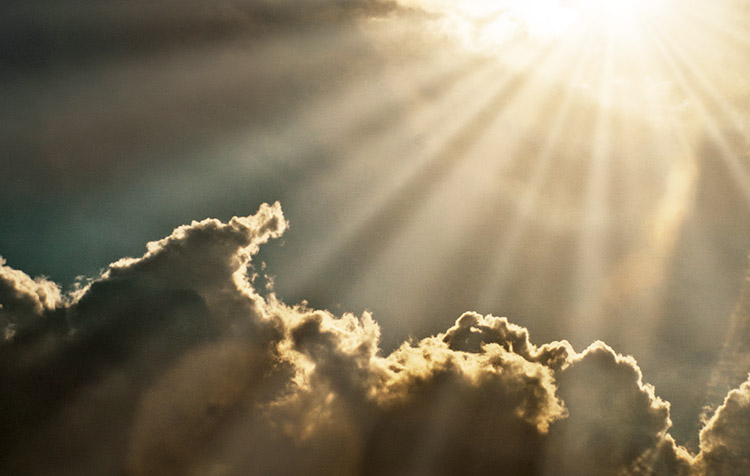 Albedo Effect - What is it actually?

What is the albedo effect - and what exactly is the albedo? You may never have heard these terms until recently. But you definitely know the effect itself. It occurs, for example, when you wear a dark, black T-shirt and feel that it heats up much faster in the sun than its light, white counterpart.

The reason is quickly explained: bright surfaces reflect large parts of the sun's rays, while dark surfaces absorb them. The albedo describes the exact ratio of light that an object reflects - and plays a particularly important role in the battle against the Climate change a major role.

In this article I would like to give you everything you need to know about the earth's reflectivity. From the definition, to the connection with the world and urban climate, explanatory examples and ways to use and influence it positively yourself. Let's go!

In advance, here's a brief overview of the post:

What is the albedo?

The albedo is understood to be a Measure of the reflectivity of non-self-illuminating surfaces. Scientists rate the albedo of a surface on a scale from 0 (no or low reflection) to 1 (high or total reflection). In short, the more sunlight a surface can reflect, the higher its albedo - and the amount of light that is reflected back from it.

How large this quantity is ultimately depends on the Wavelength and the Angle of incidence of the rays, but above all from the Texture and color of the surface. Light surfaces, for example, reflect more sunlight than dark surfaces.₁

Incident sun rays hitting a surface have two possibilities. They can be absorbed or reflected. The albedo effect ultimately reflects the ratio of reflected to incident light and, in simplified terms, indicates, how well a surface reflects the sun's rays.

Black polar bear skin as an example of low albedo: most of the radiation is absorbed by the dark skin, giving a warming effect. (under their white fur, polar bears are black).

Bright snow cover as an example of high albedo: in combination with a bright cloud bottom edge, it can cause the sunlight to reflect back and forth, resulting in a so-called whiteout effect, where the entire environment appears absolutely white.

What role does the albedo effect play in climate change?

When the Land surface changedIf the albedo changes, the environment heats up or cools down accordingly. Examples of this are the Deforestation of the rainforests or the melting of sea ice.

For the latter, the change in albedo is particularly extreme. Ice and snow are very bright and reflect a large proportion of the sun's incident rays. For snow, for example, the albedo is between 0.8 and 0.9.₂ This means that the surface reflects 80 and 90 percent of the sun's rays.

But as the planet warms, the sea ice begins to melt, exposing the ocean below. The much darker surface absorbs more solar energy, so that warming and ice melt eventually become even more intense. You could say: the warmer it gets, the warmer it gets. Or the more Antarctica melts, the more Antarctica melts. This process, in which consequences amplify consequences, is called a feedback process.

How are albedo and urban climate related?

The reflectivity of surfaces plays a role not only for the global climate, but also on a somewhat smaller scale for the urban climate. While green spaces have a relatively high reflectivity, the albedo of surfaces sealed with concrete, paving and asphalt, which tend to be dark, is very low. Also House and apartment roofs are often dark.

Because much of the sun's radiation is absorbed rather than reflected in cities, it is often unbearably hot in attic apartments on sunny days. The brighter roofs would be, the less their surroundings would heat up - and the less energy-intensive air conditioning would be needed. This is another reason why buildings in the warm Mediterranean region (e.g. in Spain, Greece, Italy or Turkey) are often brightly painted.

What are other examples of the albedo effect?

Before we come to the end of this article, I would like to give you a few examples of the albedo effect.

The albedo of dark asphalt roads is about 0.15. Around 15 percent of the light is therefore only reflected - and 85 percent is absorbed by the surface. In the case of somewhat lighter, grayish concrete streets or gray sidewalk slabs, the measure of reflectivity is still between 0.2 and 0.4.₃ This is another reason why light-colored sidewalks are almost "pleasantly cool" on hot summer days compared to softened asphalt streets.

Sun rays can also be reflected by clouds, i.e. even before possible contact with the earth's surface. Seen from Earth, they are mostly white, light gray or dark gray. Seen from space, however, they are much brighter - so it is not surprising that their Albedo between 0.3 and 0.6 lies. The tiny water and ice particles in clouds reflect between 30 and 60 percent of the sun's rays hitting them.₄ The height, number and size of clouds play a very decisive role in the precise reflectivity of clouds.

Albedo of the earth

Of course, the albedo on Earth is not the same everywhere. For example, the reflectivity of surfaces with fresh snow (between 0.8 - 0.9) or of deserts (about 0.3) is much greater than that of forests (between 0.5 and 0.18) and water surfaces. (between 0.05 and 0.22 depending on the angle of inclination).

The assessment must also take into account that cloud formation is much stronger at the equator, for example - and that much more snow falls at high latitudes. On average, the albedo of the Earth is 0.3. Around 30 percent of the sun's rays are therefore reflected by the earth's surface - and around 70 percent are absorbed by it.₅

What can I do for a more climate-friendly albedo?

Everyone has the opportunity to make at least a small contribution to ensuring that the earth's surface reflects as much of the sun's radiation as possible. This lies, on the one hand, in ensuring that surfaces are as bright as possible. For example, homeowners can influence the Roof color of one's own house or the Paving stone color in the driveway. You may even have a professional opportunity to influence land sealing and albedo where you live. For example as City planner, mayor or Landscape architect.

On the other hand, you can also work with your everyday behavior make sure that the land surface of the earth does not darken even further. This works by basically live more climate friendly. For example, by opting for a vegan lifestyle, because as a result, less rainforest is cleared for you to grow animal feed and create pasture, and less methane is emitted by cattle.

Vacation travel by train instead of by plane or the preference for regional and seasonal food helps to slow down the melting of ice as a result of global warming and to keep the Earth's albedo as high as possible.

The albedo effect must not be underestimated

Consequently, if surfaces that are not luminous themselves become darker and darker, fewer warm rays of sunlight will be reflected. The planetary Reflectivity thus has a decisive influence on the radiation budget of the atmosphere - and the temperature on Earth. For this reason - and also because of the climatic feedback processes - the risks but also opportunities of the reflective power of surfaces in combating climate change must not be ignored.

I hope that I could bring you a little bit closer to the albedo effect and its effects on our planet today. Do you have any questions, tips or suggestions? Then I look forward to your comment.

PS.: In the sustainable knowledge blog I'll explain other important technical terms from the field of environmental and climate protection. Now you can find out next, for example, what is meant by planetary boundaries or the Rebound effect understands. Have fun!