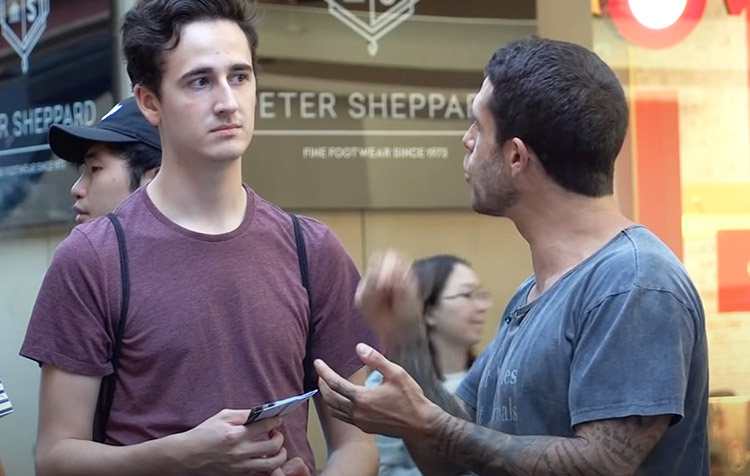 Looking for vegan discussions and notable street interviews around meat consumption, veganism, and animal rights? Then you are absolutely right here! There are so many great people who stand up for animal rights in public. The street interviews they share with the world on the internet have finally made me a die-hard vegan, too. Especially because they reveal that there is no logical argument against a vegan lifestyle and a purely plant-based diet.

Here I would like to introduce you to some of the best public discussions. One thing in advance: Not all of them were successful - but all of them are thought-provoking! Let's go!

Notice: Most of the videos are in English. If you want, you can also just set the appropriate subtitle.

James Aspey is an Australian animal rights activist. In this street interview, he makes a German tourist unmistakably aware of the consequences for animals if you spend your money on meat, cow's milk, eggs and other animal products. Personally, I am thrilled by the Openness of his counterpart - especially because that's not the norm. The discussion with James has definitely made him rethink and change his future consumption.

Anton begins the interviews in this video with an issue that most people are against and few of us really participate in: Bullfights. So he learns from his interview partners that they are definitely against Cruelty to animals are.

Afterwards he then comes To speak to the animal suffering that results from their own way of life. Here then show the inner conflicts, since you simply can not Love animals but eat them at the same time can. An exciting approach to this vegan discussion, which is guaranteed to have inspired some interviewees to question their own consumption of animal products.

This debate by animal rights activist "Joey Carbstrong" did not ultimately lead to Frank, the interviewee, going vegan in the future. But it confirms once again that it no logical arguments for inflicting suffering on innocent animals for our pleasure.

Ultimately, it is habits and beliefsthat lead Frank to give one excuse and anecdote after another - and finally Joey threaten with violence. After all, this is a nice example of how far some people will go to justify their meat consumption.

Many people deal with this question openly and answer honestly - but it's different with Cue. Personally, I've yet to meet a person who is so full of prejudice and doesn't put it aside even when it's blatantly and publicly debunked. Although Ed is factual and polite, as always, the interviewee invariably responds (subliminally) aggressively. The own Justify the consumption of animal products by saying that there are indigenous peoples in the world who have to eat meat.is simply absurd and embarrassing. "I don't care about animals and I love meat" would be a more consistent and honest answer.

Probably every viewer sympathizes here with Ed and realizes how biased Cue is on the subject of "veganism". Therefore, it is a successful street interview for me, even if Cue had to leave the conversation suddenly at the end for lack of arguments.

5. Natasha from "That Vegan Couple" - Vegan Women ends up in Meat Eaters Arms

I personally don't know a more emotional street interview about veganism and animal rights than this conversation between Natasha from "That Vegan Couple" and her interviewee.

He understood and realized from the beginning that it was a inner conflict is to pay money for the brutal acts on animals, although you can not morally represent them. In the course of the conversation he got more information about the background, accepted it and made a decision. I am sure that by now he has vegan lives. A great example of unbiased, compassionate and open-minded peoplewho act when they perceive an injustice.

Animal rights activist Hudson Tarlow talks to three young women about the vegan lifestyle in this street interview. The main interviewee makes it clear that she finds acts against animals cruel and that she can imagine giving up animal products. Hudson explains how he made the switch and gives her valuable tips. Since she is especially concerned about her ethical reasons for the renunciation of animal products clarifies, I am sure that at the latest a few months after this vegan discission she will eat a purely plant-based diet.

Alex Bez is one of those animal rights activists who knows exactly how to talk to people to convince them to do the right thing. Here he explains the background of the meat, egg and dairy industry to 12-year-old Yonah. I am thrilled with this boy - his answers are so honest and factualas one would expect from an adult. However, many adults are extremely prejudiced, lack insight and are unwilling to change anything. Yonah's parents, on the other hand, are fortunately the kind of people who let their son make his own decision. For me, the conversation is one of those vegan discussions that should really make any meat eater wonder.

Paul Bashir is the founder of Anonymous for the Voiceless, a grassroots animal rights organization that conducts street interviews in many cities around the world. Here he talks with Frank Tufano, who himself sells meat products on the internet and likes to provocative but less truthful claims sets up. In this debate about veganism and animal rights, for example, he says that as a Vegans kill even more animals would. Paul picks apart each of his arguments - until finally even Frank's cameraman thinks about going vegan.

Personally, it makes me extremely uncomfortable to see how embarrassing and childish some people act to continue consuming animal products. Not everyone has to be vegan - but everyone should at least be honest with themselvesinstead of bending so much that you almost don't recognize yourself anymore. "I don't care much about animal suffering, so I continue to eat animal products," for example, is an honest answer.

I hope these street interviews about veganism, meat consumption, and animal rights have been helpful to you. Do you have any questions, tips or further discussions that should not be missed here? Then feel free to write me a comment.

PS.: Maybe you also feel an urge to make a difference in the world and to feel to advocate for animals in everyday life. Learn in the linked post how you too can be a become a vegan activist and educate other people about animal rights. Good luck!