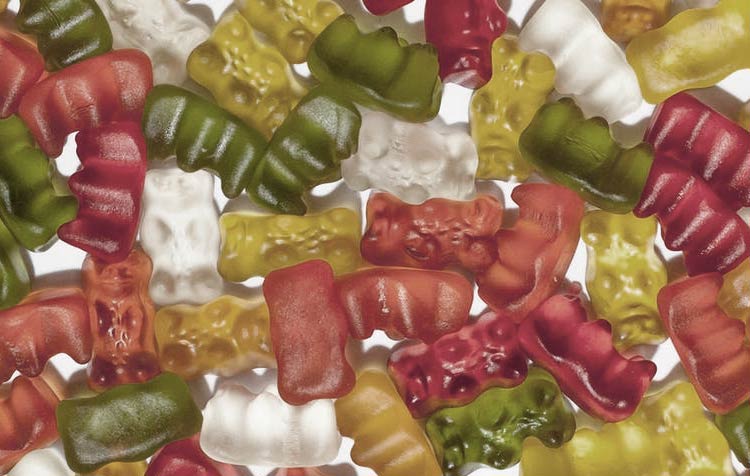 15 foods that are surprisingly not vegetarian and vegan

The title of this post could also be "15 foods that are not vegetarian or vegan - and you guaranteed to surprise become" should read. Because that's what happened to me, at least, when I decided to do it, Become a vegetarian. There are countless products that I would not have dreamed of being non-vegetarian in their conventional form.

In this article, I would like to introduce you to these foods and explain why they are not always vegetarian or vegan. Let's go!

Notice: Of course, many things also depend on how narrowly you define the term vegetarian or vegan for yourself. Here I have simply committed myself to the respective 100% variant. 🙂

These foods are not vegetarian and vegan

Let's talk turkey! So in which products are parts of dead animals hiding, even though we wouldn't suspect it at first? As promised, you will now get a whole broadside of examples.

That Italian Parmesan is not vegan, most were certainly aware due to its cow's milk as a basis. But unfortunately, it is not even vegetarian in its original form. Like many other varieties, Parmesan cheese is made with the help of animal rennet (mostly from the carcasses of calves) is produced, through which the milk coagulates.

Alternative: There is also in classic supermarkets hard cheese, which is produced with microbial rennet (molds provide for coagulation of milk). It is only not allowed to be sold as Parmesan, because the term is protected. And of course, the hard cheese is also available in vegan form.

Notice: Pecorino, Grana Padano and Gorgonzola also contain rennet. Even cream cheese (e.g. at Bresso) is not always vegetarian - because now and then animal gelatin is used as a thickener.

When clarifying beer, gelatin and other non-vegetable ingredients may be used in some circumstances. This is not often the case, but it is possible. Since the label adhesive in many types of beer consists of animal components, even a 100% vegan beer is not always guaranteed.₁

Alternative: Fortunately, German beer is basically at least vegetarian due to the Purity Law and, apart from the label, also vegan. But if you want absolute clarity, you have to ask the manufacturer. After all, nothing helps!

Oh yes, but do not worry. Only a few chips are not vegan and also not vegetarian. Some suppliers flavor their chips with game, for example. Also rennet from calf is used for the production of some chips. The chips are then of course neither vegetarian, nor vegan.

Alternative: There are many vegan chip varieties, such as. Lay's Light. As always, look carefully at the ingredients. And if you can plastic free living you'd better take a look at Make chips from stale bread yourself.

Pesto also requires special care, as not all products are vegetarian. The Pesto Genovese from Barilla contains, for example, the cheeses Grana Padano and Pecorino, which in their original form are again produced with animal rennet.

Alternative: A look at the ingredients list usually shows which cheese is part of the product. The Alnatura Organic Pesto Basilico for example, is a vegan alternative. For example, you can even make your own pesto from radish leaves.

Some cornflakes are particularly shiny - then it is not unlikely that these were coated with animal gelatin (skin, bones and connective tissue of animals), so that the coated sugar layer holds better. Cornflakes are therefore not always vegetarian and vegan.

Alternative: Fortunately, most cornflakes do not contain gelatin. You can play it safe by taking a close look at the list of ingredients on the cornflakes package.

Alternative: Not every Asian cuisine uses fish-based dashi - sometimes dashi is also made on the basis of shiitake mushrooms. If you want to be absolutely sure, just ask the restaurant operator or the respective supplier.

Today, marshmallows are mostly produced with gelling sugar. This usually contains pectin and is therefore even vegan - but this vegetable polysaccharide is expensive. Therefore, it is replaced again and again by cheaper and unfortunately animal gelatin, whereby the food is strictly speaking no longer even vegetarian.

Alternative: Take a close look at the ingredients. There are also marshmallows without preserving sugar, with which you are on the safe side. Otherwise, the only thing that helps is to ask the manufacturer.

That gummy bears are not vegetarian is already known to many people. Maybe you've heard of them, too. Because as tasty as the Haribo Gold Bears Unfortunately, they contain animal gelatin. Accordingly, they are not vegetarian and also not vegan.

Alternative: There are many gummy bears that are vegetarian. For example the Vegetarian bears from Original Bear Garden.

Both orange juice and other fruit juice drinks are often clarified with gelatine in their products. This consists for example also red fish and pig bones and is accordingly neither vegetarian and certainly not vegan.

Alternative: Since suppliers are not obliged to indicate this production step on the product label, in my opinion the only way to help here is to ask the manufacturer.

Notice: I am not omniscient and many things improve over time. If you notice any mistakes or have suggestions for improvement, just drop me a comment below the post. I'm totally open to it 🙂

There are certainly some bakeries that bake their pastries, such as breads, rolls or pretzels, in the traditional way with lard. As is well known, this is processed slaughter fat from pigs and is not vegetarian and certainly not vegan.

Alternative: Most baked goods do not contain lard and are vegetarian at least once. In the supermarket, the animal ingredients must be labeled anyway, but you should ask your trusted baker to be on the safe side.

Heard correctly - not every wine is vegetarian and vegan. Indeed, egg white is often used to clarify wines. Gelatin, casein obtained from skim milk and even the swim bladder of the beluga sturgeon are also used from time to time in the clarification process.₂ Incidentally, the latter is also used in the production of some types of vinegar.

Alternative: There are now many vegan wines on the market that are simply clarified with activated charcoal or the mineral clay bentonite. You can be on the safe side by asking the manufacturer or wines specifically advertised as "vegan".

Figs are incredibly tasty, but unfortunately, as a rule, not vegetarian. It is said that in every fig there is at least one dead wasp. This is because fig wasps use the fruit to lay their eggs inside. Sometimes the fruit is too narrow, so the wasp loses its wings and can neither lay eggs nor get out of the fruit. Instead, it dies there and an enzyme in the fig then digests it.₃ We don't taste the wasp, but as a rule, figs are therefore unfortunately not vegetarian or vegan.

Alternative: In my opinion, there is unfortunately no absolute security here!

Notice: By the way, even organic bananas are not always vegetarian, as they are sprayed with a pesticide made from crab shells and shrimp.

Low-calorie yogurt is usually nice and creamy! As delicious as this may ultimately be, it is mainly due to the added gelatin. Unfortunately, this means that not every yogurt is automatically vegetarian.

Alternative: Just look for the vegan seal on a yogurt. Some of them explicitly state that they do not contain gelatine - which usually means that they are at least vegetarian.

If a red jam contains additional colorants, it could be that it is a non-vegetarian food. Indeed, the jam gets the intense red only from the animal dye carmine, which is obtained from female scale insects.₄

Alternative: Again, you should take a close look at the ingredient list. A safe and vegetarian or vegan alternative is for example the Fruit spread strawberry from Alnatura.

The delicious M&M's also contain the dye carmine, which can only be produced by drying and cooking female scale insects. So they are not even vegetarian. I'm sure very few people know that. They are not vegan anyway because of the milk.

Would you have guessed that these foods are not vegetarian?

Figs, cornflakes, chips and Parmesan cheese should not be vegetarian and vegan? Phew, I would have doubted that in the past! And I have to be honest: I didn't know all of these examples of surprisingly non-vegetarian foods even before I researched this post. The exchange with long-time vegans, the look at the ingredient lists, the questioning of products and asking manufacturers, however, helps immensely.

Do you have any questions or suggestions about the article on non-vegetarian and vegan food? Or can you think of other examples? Then I look forward to your comment.

PS.: In our Blog for sustainable nutrition you will receive many more tips! For example, learn how your daily meals are related to the climate or simply learn more about the Factory farming.