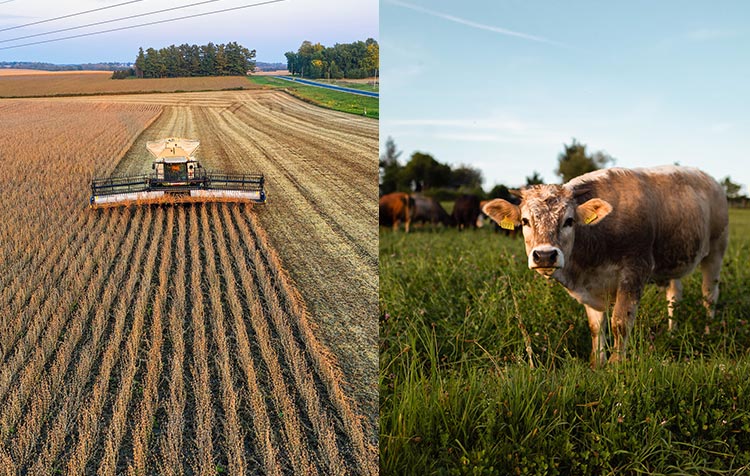 Want to learn more about land use for meat, eggs and dairy products? Then you've come to the right place! Whether it's steaks, cheese, potatoes or tomatoes - food doesn't grow in the supermarket, but has to be produced at great expense. While plant-based foodstuffs are simply grown, harvested and consumed on arable land, the land required for animal products is much higher, for example, due to the animal feed, pasture land or stables. In times of Climate change, the Deforestation of the rainforests and of the Species extinction this is a massive problem.

In this article, I'll explain why meat, eggs, and milk are so land-intensive - and why the world's population could be fed with about a quarter of the land currently used to produce food. Let's go!

In advance you can find a short overview of the article here:

Facts & figures around the land consumption of meat and animal foods

First of all, it is important to consult meaningful statistics to get a clear picture of land use for meat production - and all the facts related to it. Here are some figures that give a sense of the current extent and its evolution:

What is the global area of agriculture?

Agriculture is practiced on more than one-third of the earth's habitable surface.₁

What is the land footprint per person?

What food categories does the land footprint break down into?

How much arable land is farmed for animal feed production?

Already today, 30 percent of global arable land is farmed solely for the production of animal feed, such as soy, wheat or maize.₂

How large is the global soybean cultivation area?

What proportion of the farmed arable land is used for the production of animal foodstuffs?

83 percent of the total area required for our food is used for the production of meat, sausage, milk or eggs and other animal foods.₇

To what extent is the area available for agriculture becoming smaller?

Erosion, salinization, pollution and sealing are reducing the amount of available arable land. Already today, 52 percent of our global arable land has been destroyed or is at risk.₂

How much land is each inhabitant of the earth entitled to for food?

Today, each inhabitant of the earth has approximately 2,000 square meters (= 0.2 hectares) available for growing food. In 2050, however, this will probably be only 1,700 square meters.₄

How does today's agricultural economy affect biodiversity and deforestation?

How much land does Germany's diet take up abroad?

Around 18.2 million hectares of land are occupied abroad for food products imported into Germany. This figure rose by 38 percent from 2000 to 2010 alone.₅

Why is land consumption for meat and other animal foods so extremely high?

The world's hunger for meat can only be satisfied by dedicating land to the production of meat. Animal feed cultivation and pasture opens up. Cattle even require about 28x more land than poultry or pork, for which animal husbandry is of course also land-intensive.₆

A remarkable statistic makes it particularly clear why the Factory farming essential to the biggest environmental problems of our time but also the potential that lies dormant in adapting our diet: 83 percent of the area used for agriculture are necessary for the production of animal products (about 26 percent of the earth's land area) - but the cultivation of this arable land produces only 18 percent of caloriesthat we humans absorb as a whole.₇

These numbers are especially tragic, considering that the available fertile arable land is declining (e.g., due to Soil erosion, desertification or flooding) and the World population continues to grow. A plant-based diet would simply be much more resource and calorie efficient.

Why does veganism reduce the land footprint per person?

According to a extensive study of the University of Oxford, 75 percent of the world's arable land could be used for other purposes., when humanity vegan would feed. It is simply the "animal detour" that takes up so much land area in our diet. If we would consume the grown plants directly and not feed them to animals to eat afterwards, land consumption would decrease significantly.

A lot of subjunctive - especially as global meat production increases. But the Changing the way we eat is fortunately running at full speed, as the ecological, health-related and above all also ethical Motives for veganism are so diverse and plausible. The change is all the more needed when you consider that countless amounts of animal food are produced "for free" because they end up in the garbage can.

Tip: How you can change your Reduce personal food waste you can find out in the linked article.

What opportunities and benefits do the reclaimed land areas hold for life on Earth?

Only a small proportion of the nutrients that cows, pigs or chickens take in via animal feed end up in meat later on. So feeding the world with plants would definitely be more efficient - plus it conserves natural resources. But to what extent are there advantages for life on earth when we humans only a quarter of the land area currently cultivated for our food? Here are some of the positive consequences of reducing the amount of land needed for food:

Can you think of other benefits of using less land for meat? Then feel free to write me a comment under this article.

Everyone can reduce the amount of space needed for their own meals!

Every piece of meat on our plates contributes to destroying species-rich ecosystems like the rainforest and preventing the reforestation of new land areas. We need to ask ourselves: are the 10 minutes of enjoyment really worth endangering the planet, the animals and ultimately ourselves and the future of our children and grandchildren?

Every day, each of us has the opportunity to minimize the amount of land we use for our own diets - and make a real difference for biodiversity, climate and forest protection, and social justice.

Do you have any questions or tips about land use for meat and other animal-based foods? Then I look forward to your message in the comments column.

PS.: You want - apart from the area requirements - your Making nutrition even more sustainable in principle? Then you will now get many more valuable tips in the linked article. Have fun!