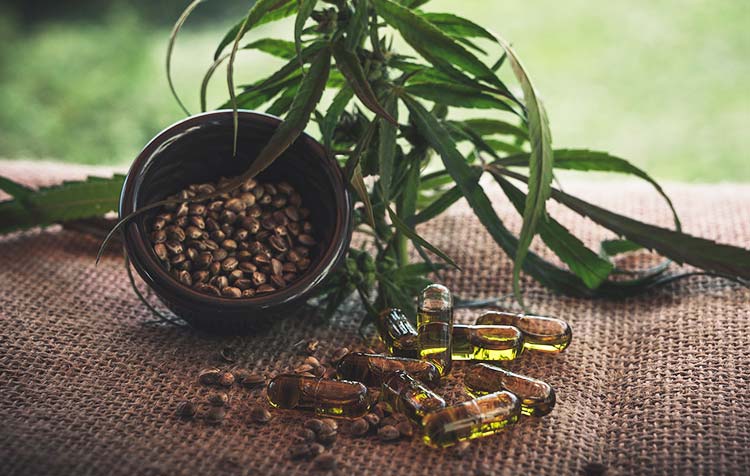 CBD, THC, CBG & CBDA - What are the differences?

Want to know the differences between CBD and THC and the many other active ingredients from the cannabis plant? Then you've come to the right place! Finding your way through the jungle of cannabinoids is not that easy. There are many different active ingredients and abbreviations, so you can quickly lose the overview.

So that you know exactly in the future, what is hidden behind which abbreviationI have compiled an overview of the most important cannabinoids. You will also learn what the different abbreviations mean, how these substances work and what distinguishes them from each other.

CBD, THC, CBG, CBC - the list of cannabinoids is long. More than 80 different variants have been discovered so far in the cannabis plant. They all have a certain effect on our body. Some cannabinoids are sedative and antispasmodic, while others are intoxicating. Still others are characterized by their anti-inflammatory and antibacterial properties.

In the following section I will give you the 6 most important cannabinoids and summarize their individual effects for you.

CBD is a cannabinoid that occurs in the hemp plant. It is extracted from the female plant and processed into oils, liquids, capsules, ointments or even fruit gums.

The Effects of CBD are very diverse. It has anti-inflammatory, antibacterial and analgesic properties. CBD also has relaxing, antispasmodic and anti-anxiety effects. Unlike some other cannabinoids, however, it has no intoxicating effect. Therefore CBD in Germany is also legal and freely available.

Applications of CBD include the following:

THC occurs - like CBD - in the cannabis plant and is also one of the cannabinoids. THC is known mainly because of its psychoactive effect, which is the well-known Cannabis intoxication triggers. Because of its intoxicating effect, THC falls under the category of addictive substances in Germany. This makes the Possession illegal.

An exception is the THC-containing medical cannabis, the prescribed by physicians for therapeutic purposes may be used. It is mainly used for chronic pain, inflammation and mental illnesses (depression, PTSD, anxiety disorders, etc.).

The bigger the cannabis plant gets, the less CBG is contained in the flowers. During harvest it is mostly only around 1% CBG. Due to today's breedings, which aim for a higher THC or CBD content, there is often even less CBG present.

CBDa is a CBD acid. The cannabis plant forms the well-known CBD from this acid. CBDa can therefore be considered a precursor of CBD. Not much research has been done on the mode of action of CBDa. However, it is believed that it anti-inflammatory and antiemetic properties owns.

In most CBD products, CBDa occurs alongside CBD and other variants as a mixture. CBDa can support the positive properties of CBD.

CBC also belongs to the cannabinoids and is extracted from the cannabis plant. Unlike other cannabinoids, CBC is not yet particularly well researched. However, current research suggests that CBC...

CBN is a cannabinoid that is currently very trendy. The great attention it has received is mainly due to its calming and relaxing effect thanks to the new technology. It is therefore used, among other things, in the Treatment of sleep disorders, anxiety and pain.

The special thing about CBN is that it is only present in very small amounts in young cannabis plants. It is only formed after some time, when the THC oxidizes in the plant. Therefore it is obtained mainly from late harvested plants.

What are the differences between cbd and thc - and the many other cannabinoids?

Now you know the most important cannabinoids. The only question that remains is what exactly makes them different. We will get to the bottom of this in the following chapter.

The difference between CBD and THC

The differences between CBD and THC have already been made very clear in the embedded infographic. Probably the most important difference is the intoxicating effect. While THC has a psychoactive effect, CBD does not have this effect. This is why CBD is legal and THC is illegal. From the positive properties of CBD so everyone can benefit - without a prescription and without intoxication.

The difference between CBD and CBG

CBD is formed from CBGa. However, it differs in its Concentration in the cannabis plant and also in its Chemical structure. For ingestion, CBG is rather secondary due to its low occurrence in the plant.

The difference between CBD and CBDa

According to research, CBDa has a strong calming effect on the body, but the classic CBD used more diverselybecome. In addition, CBD is present in greater quantities in the plant than CBDa.

The difference between CBD and CBC

CBC is not yet as intensively researched as CBD. However, it is believed that CBC is the Enhance the effect of other cannabinoids particularly well can. CBD, on the other hand, has a high effect itself.

The difference between THC and CBN

Although CBN is produced from THC, it is but lacks the intoxicating effect. For this CBN has pleasant calming and relaxing propertieswhich, among other things, can be used in the treatment of sleep disorders.

The right cannabinoid for your complaints

Cannabinoids are very versatile and can be used for a wide variety of purposes. However, each cannabinoid affects your body a little differently. Before you decide on a product, you should take a closer look at the cannabinoids it contains and consider whether they suit your symptoms. If you're unsure which cannabinoid is best for you, you can also check out resort to a product that contains different variants. This way you can benefit even more from your preparation.

PS.: Can CBD also help against depression? You can find the answer in the linked article.