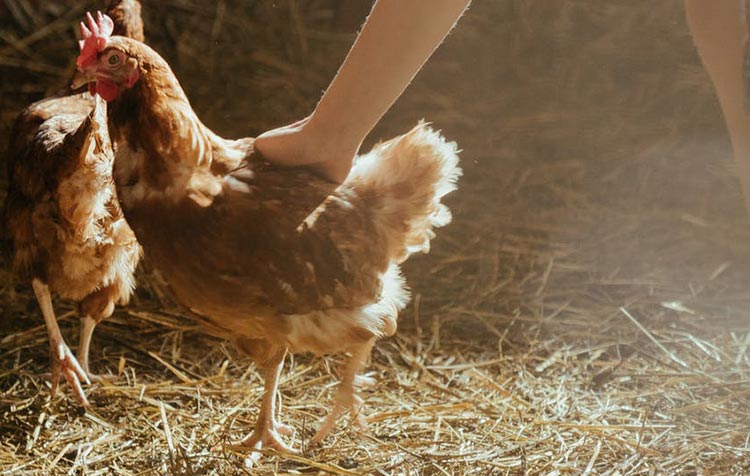 Why don't vegans eat eggs from their own home-raised chickens? After all, the chickens have a nice life, don't they? Probably you already know, Why vegans do not eat eggs from factory farming. But what actually speaks against the eggs from happy chickens that live on their own farm? Admittedly, this is a much-discussed topic that is rarely agreed upon, because the animals are already much better off than in extreme situations. Factory farming.

Nevertheless, I would like to present you here eight reasons that, in my opinion, also speak against the consumption of eggs from happy chickens in your own garden. Let's go!

In advance already a short Overview for you:

Why don't vegans eat eggs from their own farm?

The "backyard eggs" (english: backyard eggs) may be significantly more animal friendly and also vegans often bring to the point where you ask yourself the question "yes what exactly is actually bad about it?". After all, there is often regional food, the animals usually have free run and can interact socially with other animals and people on their own property. Nevertheless, there are also certain aspects that do not go hand in hand with the vegan lifestyle are compatible.

Therefore, let's not 'long' chatter and come directly to the point. For the following briefly and crisply explained motives, I as a vegan refrain from eating eggs from my own farm.

1. because the purchase of the chicken still supports the egg industry

When we buy the chicken from a farmer or breeder, we are supporting the egg industry, in which Chicks shredded or gassed and laying hens are killed as soon as they become "unproductive. This is not in the spirit of veganism.

But suppose we rescue a chicken from a slaughterhouse or take it over free of charge from a farm: what's wrong with that?

The Bankiva Chicken, the wild parent form of the domestic chicken, lays only about 10 - 15 eggs a year.₁ "Modern" laying hens produce However, more than 300 eggs a year₂ because we consider it a high-performance machine and have bred it to perform that way.

Besides, we just take the egg away from the chicken - and for this very reason it lays the next one a short time later. Therefore, it would be more animal-friendly to let the unfertilized egg incubate until the animal itself realizes that it is not fertilized. As a result, it will leave the hatchery and not constantly feel the need to replace it directly again.

3. because chicken eggs are actually the food of chicks

The proteins, fat, carbohydrates and other nutrients in an egg are not made to be eaten by us humansbut serve as food for unborn chicks. Another reason to also give up eggs from their own chickens.

4. because it is still exploitation

Mostly chickens from their own breeding continue to be a means to an end. It still goes in profit, albeit on a small scale. Most people want to eat the eggs and sell them, or intend to hand the animal over to a butcher at some point. Whether you take money for it or not - or eat it all yourself or not: the chicken in such cases will be treated like a resourcewhose life value depends only on what it does for us. But this Animals are sentient beings and deserve a right to freedom, just like we humans do. This is a major reason why vegans do not eat eggs from their own chickens.

5. because chickens eat their own eggs

The Egg production costs the chicken valuable nutrients - especially when it lays so many eggs! The vitamins and minerals from the contents, and not least the calcium from the eggshell itself, are incredibly important for the health of the animal. That's why laying hens often eat their own eggs to absorb the nutrients they need. In this way, the eggs from your own farm are not "wasted" either, if you refrain from eating them.

6. because the excessive egg production endangers the life of a chicken

When chickens produce eggs, they consumed nutrients for it. The lack of nutrients like Calcium (for the eggshell) is the main reason why animals so often suffer from osteoporosis and bone fractures. Corresponding deficiencies can also be a life-threatening problem become for chickens in their own keeping. For example, if an egg gets stuck in the cloaca of the chicken. The yolk can also settle in the body and lead to infection with E.coli bacteria and thus to peritonitis. The latter results in death over time if not treated.₃

For these reasons, as a true chicken lover, you'd better feed their eggs back to them and make sure they lay as few eggs as possible.

Notice: A small hormone implant opens up the possibility of preventing the chicken from laying eggs so that it can retain the nutrients. Even if this seems unnatural, it works against the high performance of the animals trained by us humans.

7. because many backyard chicken owners also kill their animals

Many chicken owners (whether large or small scale) kill their animals as soon as they eat their own eggs instead of letting them absorb the nutrients. This is also indicative of the fact that one animal mainly from egoistic motives keeps, since it is killed immediately, as soon as it no longer fulfills its "purpose". That this behavior of laying hens, however, is health-promoting for the animal, should actually bring joy to the most profit-hungry people in the long run.

8. because eggs from happy chickens are also cholestar bombs.

Proteins, of course! But the eggs with 417 milligrams per 100 grams the most cholesterol-rich food in the world is something that advertising likes to hide from us.₄

Why should we eat something that is not vital and endangers our health? Just out of habit? Who Prevent heart disease would like, should among other things really rather completely do without eggs, no matter whether they come from cage, free-range or own attitude.

9. because it is easier to break a habit if you do without it altogether.

As a vegan, I also eat neither eggs from factory farming nor from my own rearing, because doing without makes it much easier for me not to make an exception. Because if I would continue to consume eggs from my own husbandry, the temptation would be much greater when visiting a restaurantto eat a dish with egg, even if this does not come from happy chickens. The latter can at least not be determined with absolute certainty, as it would only be with their own attitude at home.

So vegans also do without eggs from their own chickens

Simply because it is the Most animal friendly behavior is. The life of the laying hen on a large plot may already be much better than in the narrow, dark cages with thousands of their peers and only a few centimeters of space. But it can be even better! Why not give preference to that? The animals have done nothing to us and deserve to live a truly happy and long life.

I hope that in this post I was able to give you a deeper insight into the motives of vegans not to eat eggs from happy, home-raised chickens either.

Do you have questions or suggestions about eggs from your own chickens? Then write me a comment!

PS.: Look you with pleasure still something in the Animal welfare blog. There you will also learn, why i live vegan at all. Have fun!