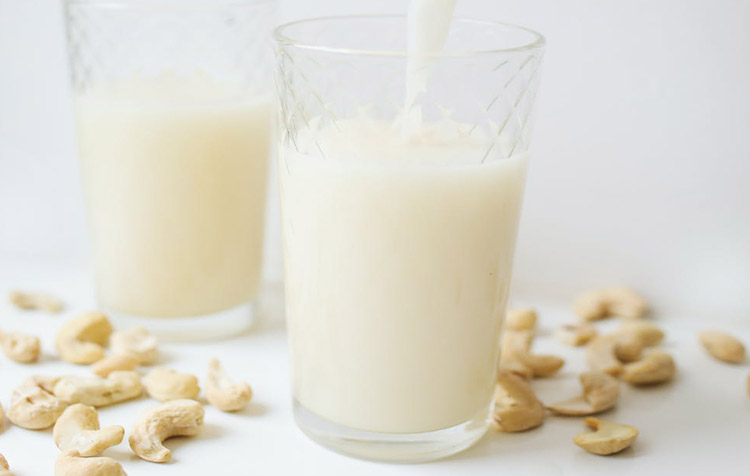 Looking for a delicious vegan milk substitute? Then you are definitely at the right address! Surely you have already noticed that the Dairy industry extremely brutal is. Cows, for example, are dehorned, artificially impregnated and separated from their offspring immediately after birth.

You may also know that greenhouse gas emissions, water consumption, water pollution and land use are a real environmental thorn in the side of cow's milk production. Or maybe you're just looking for cow's milk alternatives because you're lactose intolerant. Whatever your motives, there are great ways to replace cow's milk vegan.

Here I present you now delicious alternatives. Whether for children, for baking, for muesli, as a barista version for coffee, for cooking or simply for a comparable taste. Let's go!

Tip: If you want to know again exactly, why vegans do not drink cow's milkJust quickly click through to the linked article.

When the subject of vegan milk substitutes comes up, oat milk is not far behind! The oat drink is one of the most ecological milk alternatives. Production (mostly in Germany) uses only small amounts of water and greenhouse gas emissions are also kept within limits. Also the Land consumption is very low compared to the production of cow's milk.₁

Fortunately, oat milk not only tastes delicious, but also can be Foam up very well, which is why it is often used as a vegetable milk for coffee. Also used for Baking or for delicious sauces the slightly sweet milk is super suitable!

Soy milk enjoys the Lowest water consumption among milk varieties. On the other hand, it does not perform as well in terms of water pollution as, for example, oat milk. Nevertheless, it is a great, ecological cow's milk alternative.

Anyone who fears succumbing to a protein deficiency on a vegan diet will be taught better by soy milk, for example. They is one of the most protein-rich vegetable drinks. In addition, it is also relatively easy to whip. The Neutral taste makes the soy milk additionally versatile.

Tip: A common argument is "Rainforest is cut down for soy - and that only the vegans consume". In the linked article you will learn why you should not give up soy products, but animal products, if you want to avoid the Save rainforest want.

For the cultivation of rice is a High water consumption necessary. In addition, the Greenhouse gas emissions from wet rice cultivation are enormous, even though they are nowhere near the negative values of cow's milk.

The rather watery consistency and the rather Sweet taste but still make the rice drink a delicious vegan milk substitute. However, the rice milk can be not foam up so well, such as the oat or soy milk.

Another particularly protein-rich milk alternative are pea drinks! As a rule, they are made from yellow peas. The mostly short transport routes improve the eco-balance of this vegetable milk immensely.

The white pea milk Tastes slightly creamy and is a great supplement for those who do a lot of sports or simply like to eat a high protein diet.

Good to know: An often heard argument against the vegan lifestyle is "No animals die for milk". In the linked article you will learn why this is unfortunately a serious mistake.

Almonds cut due to the high water consumption in production unfortunately does not fare quite as well from an ecological perspective. Nevertheless, in terms of land use and greenhouse gas emissions, almond milk is roughly on a par with its plant-based competitors, such as soy or oat milk. As a vegan milk substitute, however, it is definitely the more ecological alternative to animal milk.

Almond milk Tastes slightly sweet and is especially preferred by people who follow a gluten-free diet. Personally, I even find it the tastiest compared to the other plant-based milks! But for ecological reasons I prefer oat milk, which also tastes great and is so versatile.

Tip: Another, rather unknown alternative are drinks made from macadamia nuts. In the linked article you will even learn how to make Make macadamia milk yourself can!

Spelt drinks are also among the vegetable milks that are from domestic raw materials and can therefore demonstrate a good ecological balance. Compared to the milk alternatives mentioned so far, however, it is not to be found on every supermarket shelf.

The somewhat mealy tasting spelt milk Lathers up quite well, but is due to the gluten content rather unsuitable for allergy sufferers. In addition, it is not as rich in nutrients as, for example, soy milk. Nevertheless, spelt milk is basically a more environmentally friendly and for many also tastier alternative to cow's milk.

Sustainable milk can also be produced from the seeds of the hemp plant, as hemp cultivation is basically very resource-saving takes place.

The hemp milk is rich in proteins, healthy fats and valuable omega-3 fatty acids. As with spelt milk, however, you have to look a little harder to find it in the supermarket. But you're guaranteed to find this vegan milk substitute in the health food store.

Notice: However, a kind of "milk rush" is not to be expected, since only the seeds and not the leaves of the hemp plant are used for the production of the milk 😉.

A vegan milk substitute made from sweet lupins? Why not! Not only do they look beautiful in the fields, the plant can also be used to conjure up a very ecological milk. The low-resource cultivation in Germany and Europe makes the nutrient-rich drinks a sustainable and climate-friendly alternative to animal milk.

Lupine milk is rich in essential minerals and proteins. In addition, it is suitable for allergy sufferers, as it contains no gluten! However, the selection is not yet so huge compared to more popular, vegan milks that you can find them in every supermarket.

If the hazelnuts of your favorite milk grown in Germany hazelnut drinks also belong on the list of sustainable milk alternatives. Unfortunately, studies on water consumption and land use are still relatively scarce. Nevertheless, hazelnut milk can only be more ecological than cow's milk because it avoids the "detour animal".

The milk from hazelnuts not only tastes nice and nutty, it also contains valuable Nutrients, such as E and B vitamins, as well as Calcium, Iron and Zinc. In addition, it usually comes without added sugar.

Unfortunately, coconut milk is not one of the most ecological, vegan types of milk. This is mainly due to the long transport routes and the preferred Cultivation on monoculture plantations, which the Species extinction Accelerate.

Coconut milk, which also has a slightly nutty taste, is rich in vitamins and minerals, such as calcium or magnesium. Unfortunately, it also contains many saturated fatty acids. Nevertheless, it is a healthier, more environmentally and animal friendly alternative than cow's milk - and that's saying something after all the criticism in this paragraph!

Tip: If you want to know, what you can do against the extinction of speciesthen click through to the linked post!

"Not every plant-based milk alternative tastes good to everyone and is suitable as a delicious, vegan milk substitute", sure! 🙂 But from my own experience I can safely say that you will enjoy at least 2-3 of them. "But ecologically, the plant-based milk alternatives are not all either" - but they are all more ecological than the resource-wasting cow's milk. Just pick the most ecological vegan milk if your main motive is environmental protection.

As a rule, however, you will be healthier, more environmentally friendly and, last but not least, more animal-friendly with all the milk alternatives mentioned than with the mother's milk from cows. There are certainly always points of criticism - but there's really nothing to be said for the latter these days. Let's stop sucking on the teats of mother cows.

I hope that I could make one or the other vegan milk substitute palatable to you here. Do you have questions or can you think of other plant-based milks that are still missing here? Then feel free to write me a comment!

PS.: You want to contribute even more to the fact that the Factory farming stopped will? Then you get the tips in the corresponding post! Have fun and success!