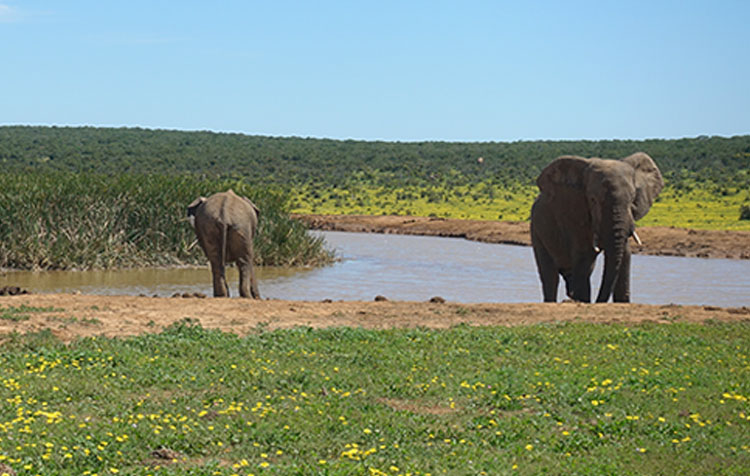 In Addo National Park on self drive safari

The Addo National Park in South Africa is ideal for a Self drive safariwhere you can see lions, leopards and elephants from a rental car. Thereby you do not influence the natural behavior of the animals and at the same time avoid high costs for expensive safari tours.

In this article I would like to tell you about our self-drive safari in Addo Elephant National Park and give you important tips for your trip through the national park. In addition, you will learn all the important information about the national park itself.

What is Addo Elephant National Park?

Addo Elephant National Park is located less than an hour's drive east of Port Elizabeth and is the third largest national park in South Africa. The national park was founded in 1931 because the number of elephants had drastically decreased - at that time only 11 elephants existed on an area of 2000 hectares. The aim to save the elephants gave the park its name. Today, the park is home to more than 400 elephants and, as you will see in the course of this article, numerous other animals, on a huge area totaling 165,000 hectares.

At which time of the year to the Addo National Park?

We were on self-drive safari in Addo Elephant National Park in September. There, it is gradually spring in South Africa and a temperature around 19°C. But basically you can go to the national park at any time of the year. However, you should make sure that the animals you really want to see come out of their holes at the chosen time of year.

What are the opening hours and prices of the National Park?

The national park was open from 7am to 6pm in September - but times depend on the season. We recommend that you take full advantage of the opening hours so that you can enjoy the animals both in the morning sun and at sunset in this unique environment. Per adult you pay 232 Rand (about 14 Euro) and per child 116 Rand (about 7 Euro) at the entrances. Prices depend on what time of year you enter the park and whether you have a wild card. The park's restaurant also offers reasonable prices.

We recommend you just get your own food & drink in advance. At Jack's Picnic Site in the center of Addo National Park, you can self-cater in a secure area, have lunch in peace and quiet, and even have your Stainless steel drinking bottle fill up and so plastic-free stay. However, the park also has a restaurant at the main entrance (Addo Main Camp) in the north of the park.

The self-drive safari in Addo Elephant National Park is something very special. Here we would like to give you a short overview about the advantages of the safari in the national park:

As a self-driver in Addo Elephant National Park

The national park has an entrance in the south (Colchester) as well as in the north (Addo Main Camp). As soon as you arrive at the gate there is an entrance fee of 232 Rand per adult and 116 Rand per child. After some valuable advice on how to behave in the Addo National Park and a few completed documents, you can then move freely as a self-driver on the roads shown in the map above. There are some lookout points as well as lots of exciting loops to drive. Each route has its own unique charm. Toilets are very scarce in Addo National Park - only in the center (Jack's Picnic Site Botanical) and in the north (Addo Main Camp) there is a toilet.

We were on self-drive safari with a Ford Fiesta. Even though there were no problems, we recommend an off-road vehicle for safari fans. You sit higher, see more and don't have to be afraid of higher costs for the rental car at every pothole. The maximum speed in the park is 40 km/h - on average you drive about 20 km/h. Based on the kilometers marked on the map, you can roughly estimate how long each loop will take. We were self-driving in the Addo Elephant National Park from 7 am to 6 pm - these are also the opening hours, which depend on the season.

Those who disregard the speed limit or the stated times are subject to heavy fines. In addition, you are only allowed to get out of the car in special zones.

What animals are in Addo National Park?

The diversity in Addo Elephant National Park is breathtaking. Even though the name of the park at first suggests elephants, leopards, lions, warthogs, zebras and ostriches also call the national park their home. While some animals you might see anywhere in the park, lions, for example, have their favorite areas. Below we have compiled a list of the animals that live in Addo National Park:

Especially among the birds there can be animals that are not on this list of animals in the Addo National Park. In the overview below all mentioned animals from the just shown overview are shown again with a photo. The picture is taken from the backside of the park map, where you can playfully mark the animals you have seen. Whoever has seen the respective animal from the Addo National Park first, collects the points 😉.

According to a park ranger, the best chances to see the lions are in the southeast of the Addo National Park in the Nguluge Loop, as well as on the eastern side of the red-marked road that crosses the park centrally. Even though the latter road looks more like a forbidden road on the park overview, it is allowed to drive on it. The prohibition sign only applies to the route to Gorah Elephant Camp.

Should you sleep in the national park or outside?

What should you take with you to the park?

First of all, you don't have to go to Addo National Park in the fanciest clothes - especially not on self-drive safari - because basically no one sees you anyway. A comfortable pair of sweatpants is recommended, since you are ideally on safari in the national park from 7 am to 6 pm. Depending on the season, we also recommend a fleece sweater and a rain jacket. What we forgot to bring was binoculars - we definitely recommend that! Because this way you can make a strenuous search work a little easier. Sunglasses should also be on your packing list for the self-drive safari in Addo National Park in South Africa. Also take enough to drink with you. Even though you can refill your water bottle at Jack's Picnic Site, for example, it takes time to get there.

Why the trip to Addo Elephant National Park is worth it

The trip to the Addo Elephant National Park is an absolute must. Especially if you are on the road with a rental car on the Garden Route anyway. The variety of animals and landscapes in the park is unique. Especially on self-drive safari you can move pretty freely, which makes the trip something very special.

Have a good trip,

PS.: In the Nature Travel Blog you will get even more cool travel reports and travel tips. Check out for example my Indonesia travelogue and be inspired by islands like Bali or Lombok.