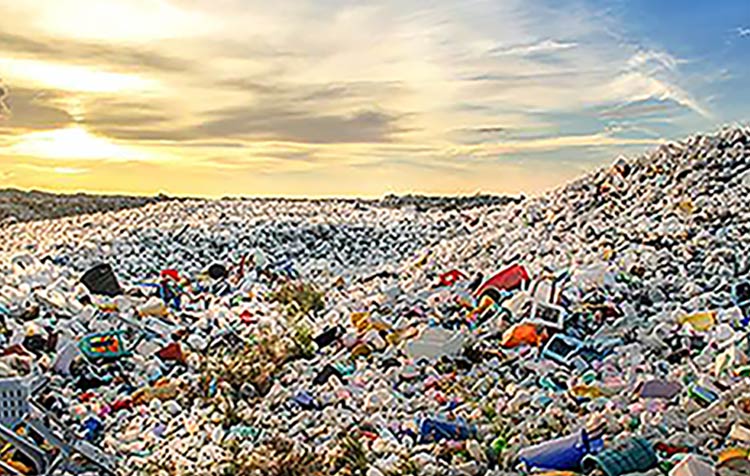 Plastics recycling is the ideal way to recycle resources (petroleum) that have already been used up. And we find plastic everywhere in our everyday lives. As a rule, we throw it in the yellow garbage can and then don't give it another thought. But what actually happens to the Plastic afterwards? And is all plastic really recycled? In this article I answer these and all other questions about plastic recycling.

Plastic recycling - What is the green dot?

When you think of plastic recycling, you probably think of the "yellow bag" or the "green dot". But what exactly does this mean?

The Green Dot was invented at that time due to the introduction of the Packaging Ordinance in 1991. This ordinance made manufacturers and retailers responsible for the disposal and recycling of packaging for the first time. Before that, the plastic was disposed of via residual waste or often via landfills. This is particularly harmful to the environment because, for one thing, it takes up a lot of space and, over the years, has released gases that act as greenhouse gases.

At that time, the Packaging Ordinance was introduced to reduce the volume of waste and reduce the number of landfills. The dual system was quickly introduced. From then on, consumers could dispose of their lightweight packaging made of plastic, composites, aluminum and tinplate via the yellow bag or the yellow garbage can, provided that a green dot is printed on it. In addition, paper and glass are also labeled in this way.

In contrast to residual waste, the yellow bag and paper waste are free of charge for you. The whole thing is financed by fees, which are calculated depending on the size, material and weight of the packaging. This creates incentives for manufacturers to improve the packaging and make it smaller and lighter. In the end, however, the fee is passed on to you when you buy a packaged product.

I have for you once again a Übersicht (Source: Green Dot) which shows you which things actually belong in the yellow bag and which do not. You can find more tips on waste separation in the article Separate waste correctly.

Plastic recycling - How much plastic is really recycled?

Since the introduction of plastic recycling, the recycling rate has increased from 3 % in 1991 to 50.2 % in 2014, with the trend continuing to increase. Every year, over 2 million tons of consumer packaging is collected annually by Green Dot. This is already a considerable amount. The following is an overview₁ of the recycling of consumables:

As you can see in the table, the rate for plastic recycling is lower than that of the other materials. There are various reasons for this. For example, it may be due to the fact that packaging is heavily contaminated and therefore has to be disposed of directly. However, this does not mean that you always have to rinse out your garbage properly. If there are only small remnants, you can continue to simply throw your yogurt pot into the yellow bag. Unfortunately, around half of the plastics in the yellow bag are recycled for energy, i.e. incinerated in waste incineration plants.

Overview (source: Umweltbundeamt 2014) of packaging waste generated in Germany in 2014

In the chart you can see the percentage of different packaging materials. Paper is by far the most commonly used. In recent years, the share in terms of volume has grown, as the shipping industry in particular has increased significantly. Plastics have a share of 16 %. The absolute amount of plastics has also increased in recent years. Reasons for this are increasing consumption of plastic cans, the substitution of paper and cardboard with plastic, and the increase in packaged counter goods (e.g. salad counters in supermarkets). The consumption of glass, on the other hand, has declined sharply in recent years.

Plastic recycling - How is the plastic separated?

In modern sorting plants, the plastic fractions are separated by using different physical processes. A screening drum divides the material flow into smaller and larger packages. Foils, for example, are extracted. An overband magnet removes tin cans from the stream. These are then compressed into cubes to simplify further transport.

The so-called eddy current separator sorts aluminum cans or tubes and aluminum foils. A magnet pushes them off the belt and collects them in a separate container.

Near-infrared separators detect the remaining different packaging materials by the reflected light spectrum. They are detected and blown out. This works for beverage cartons as well as for different plastics, such as PET, PE, PS, PP, which can then be separated by type and recycled.

I've picked out another exciting documentary on global plastic recycling for you:

Plastic recycling - What happens to the recycled material?

Tinplate has the best recycling rate among packaging materials. It can be further processed almost indefinitely and without loss of value. The pressed cubes are heated in a steel mill, then cast and rolled into sheets. The rolled sheets are further processed into cans, for example.

Plastics such as polypropylene (PP), for example, are first washed and the foreign matter removed after they have been collected sorted by type. Then the material is either shredded into PP shreds or processed into a granulate.

Basically, each type of plastic has its own recycling process.

Many consumers are confused by our plastic recycling system as a whole, because the yellow bag is often associated with plastic waste, which is not true in reality. For example, you can't throw your old toothbrush or a toy car that doesn't have the green dot into the yellow bag, even though recycling would make sense in itself. That's why a lot of garbage ends up in the wrong garbage can.

Rumors that the separately collected waste is not recycled, but burned constantly persist. Although almost 50% is recycled for energy, this is primarily due to the fact that some of the plastic cannot be recycled. Reasons for this include the large number of different plastics and the fact that many plastics are not sorted by type, as they are either mixed together or substances are added to them. However, only pure plastics can be recycled properly.

Rumors often surface that it is much more energy-efficient to incinerate the waste, since large amounts of energy must be expended for plastic recycling. Various life cycle assessments, however, show that energy recovery is the worst option.

All in all, the amount of residual waste has been reduced since 1991 and landfills in particular have decreased, saving a large proportion of greenhouse gases. This is partly due to the introduction of the dual system, but also to the fact that the share of waste incineration plants has doubled. After all, the dual system has made it possible to save 1.9 metric tons of CO2-equivalents can be saved.

Another major criticism is that only plastics bearing the green dot can be recycled. Plastics that are basically made of the same material, such as cleaning buckets or old toys, must be disposed of with residual waste. An alternative is the recycling garbage can, in which all other plastics and metals are disposed of in addition to the usual packaging waste, so-called "non-packaging of the same material".

As you can see, plastic recycling has gone from zero to a hundred in the last 25 years and many processes work well. Still, there are criticisms in many places and a lot of the plastic is incinerated. So it is still best to avoid plastics and waste in general as much as possible to do something good for the environment.

PS: Have you also always wondered how Plastic actually made and from which components is it? And is Bioplastics actually better? Click on the respective link to learn more about it! 🙂

Hello, I am Anna! I'm glad you read my article. :-) I am studying environmental science and would like to contribute to environmental protection at CareElite. I am also a trained travel agent and through my experience also the travel expert here at CareElite.