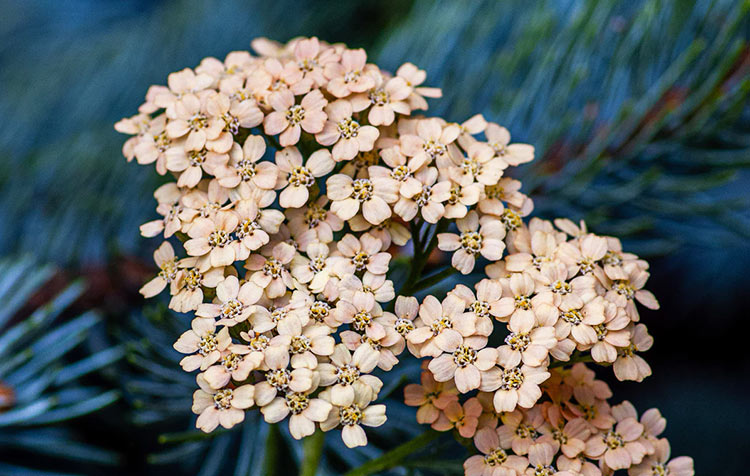 Those who are under stress, anxious, feel particularly restless and do not want to reach for the strong drug with all kinds of side effects, not infrequently take Bach Flower Drops one.

These are intended to help Soul back into balance by bringing the negative into positive sensations reverse. Maybe you already know the so-called emergency drops, which you drip on the tongue?

But what exactly are the well-known Bach flower essences all about? How are they applied and is their effect really so promising? Here I tell you everything on the subject of Bach flowers, Effect, Therapy and the Use of the drops for animals.
Here is a short table of contents about the article:

What are Bach Flowers?

Since the 1930s, 38 different flowers have been grouped together under Bach flowers to help people deal with psychological problems. Each individual flower should deal with a part of the psychological imbalance.

The Bach flowers owe their name to the British physician Dr. Edward Bach. The latter was of the opinion that any physical illness on a mental imbalance This is due to a conflict between the personality and the immortal soul.

The disease could only be truly cured if harmony was restored between these two factors. Dr. Bach first described 19, then a total of 38 disharmonious states of mind and assigned a special flower or plant part to each one.

Here is a small selection of the total of 38 Bach flowers:

These are certainly the best known of the 38 Bach flowers.

When Dr. Bach presented his theory, it initially met with only moderate approval and disappeared from the public eye just as quickly as it had come. Only about 40 years later, the Bach flowers became a topic of great importance.

At that time an esoteric journalist took up the study and represented the Mode of action of the flowers. An alternative practitioner from Hamburg, Mechthild Scheffer, subsequently began marketing them. Information about these natural remedies was also well received in the popular press. When then in the 90's also the television reported on it, was the high point of the Popularity of Bach flowers and their effect achieved. Demand grew so strongly that pharmacies received five-figure inquiries every month.

Since then Bach flower drops a timeless classic and are used mainly by people who suffer from mental imbalance, but want to avoid taking chemical medications.

What effect do Bach flowers have?

Unlike chemical medications, which are said to merely suppress the cause of emotional problems, Bach flowers are said to be able to transform a negative aura into something positive.

In plain language this means: If you feel depressed and sad, for example, the Bach flower drops should help you to be happy and full of energy again. If you are very restless and nervous, taking the Bach flowers will make you feel relaxed and calm. And if you have fear of failure, thanks to the drops you will gain a new self-confidence.

But: The Bach flowers effect could not yet be scientifically proven. Thus, experts found in studies that it is simply a placebo effect.

Many patients who opt for a personal Bach flowers test have decided, however, found out that the Bach flowers can have a positive effect on the soul. Therefore Therapy costs from some health insurance companies even taken over.
Here I give you a little insight into the mental problems for which Bach flowers can work:

This list could be extended considerably further, since Bach flowers - according to alternative practitioners - can help against most of the mental complaints. But that would go beyond the scope.

In which dosage forms are Bach flowers available?

The best known and most widespread form of administration of Bach flowers are clearly the drops. Already Dr. Bach has the so-called Emergency drops developed, which are composed of five different flowers and are taken against spontaneous onset, mental problems.

For example, they are used after an accident, after a severe shock, in states of shock or in cases of massive anxiety. These are usually small vials with a content of 30 ml. You can also take these drops as a preventive measure - for example, if you suffer from fear of flying and are about to leave.

The drops are easily taken with a pipette and placed on the tongue. For other Bach flower blends However, experts recommend dilution with sufficient water. To do this, drip the drops into a glass of water, which you then drink little by little.

Externally, however, the drops can also be applied to the skin, for example to soothe insect bites. In order to simplify this area of application somewhat, in the course of time, also special Bach flower creams brought to the market.

You will also find Bach flower globules here*. These are small scattering pellets that you let dissolve on the tongue. In this way, the active ingredients are quickly absorbed through the saliva and can develop their effect.

What should be considered when using Bach flowers?

An important note right at the beginning: Since Bach flowers have no proven effects on the organism, you also do not have to deal with Side effects or risk of overdose calculate.

If you decide to drink the drops with water, put two drops of each essence in a glass. So, if you suffer from different mental conditions that you want to address, you also reach for several Bach Flower Essences.

Drink the glass in small sips throughout the day. If you wish, you can also take each individual essence separately. If you take the Bach flower essences pure, you can each up to 15 drops take out.

Acute problems should be solved by taking the drug for about four days, while chronic complaints a taking of about four weeks require. The emergency drops, on the other hand, should act immediately.

If you are unsure which Bach flower mixture is suitable for you, it is worth visiting an alternative practitioner, who will advise you extensively.

But always keep in mind: If your mental problems do not improve, become more severe, or even cause physical discomfort, you should definitely see a doctor who will discuss alternative therapies with you.

What is Bach Flower Therapy all about?

Whoever starts a new therapy later, usually takes other Bach flowers than before, so that they in turn can unfold their effect.

In addition, some therapists rely on the "random method". In this method, the patient is covertly shown all 38 Bach flowers from which he is then supposed to select the appropriate one purely intuitively.

May Bach flowers be used on children?

Bach flowers may be used from any age and are therefore suitable even for babies and toddlers.

Proponents of Bach flower therapy are even sure that the Bach flower effect unfolds much better in children than in adults, because the little ones Approach the therapy with an open mind and that their soul was still "pure".

This means that while we adults not infrequently doubt whether a remedy that is not based on scientific findings at all can actually work, children simply look forward to the support and help they receive from Bach flowers.
In terms of dosage and application, there are basically no differences from adults.

But attention: The classic Bach flower drops contain a high amount of alcohol. So, for example, in a 30 ml bottle is filled with a quarter of 45% alcohol, which serves as a preservative. Of course, this should not be taken by children under any circumstances. So be sure to use the alcohol-free variants that are also available on the market!

The Bach flower drops are not only used in humans. Numerous veterinarians and animal psychologists are of a Bach flowers effect on animals convinced.
The basis for the application of Bach flowers for dogs, cats, horses, birds and Co. is the assumption that they also have a soul. Thus, for example, very wild animals can find relaxation through Bach flowers.
That the Therapy with animals many of its representatives also see this as a clear sign that the effect cannot be based solely on the placebo effect that is so often assumed.
In the following, I will tell you what you need to consider when administering Bach Flower Drops to your dog or cat.

If your dog has certain behavioral problems, you can try to solve them by administering Bach flower drops. These problems include frequent barking and yapping.
Effective here should be all the Bach flowers that ensure that your dog relaxes again and becomes calmer. These are also used when your dog shows a high aggression behavior.
If, on the other hand, your pet is rather anxious, he should take Bach flowers that will make him more courageous again.
Important: The right mixture should always be based on the respective Character of the dog be coordinated. Therefore, experts advise to consult a veterinarian or animal psychologist who is well versed in the use of Bach flowers.

Do cats suffer from emotional disordersThese are usually treated with a mixture of about six to eight different Bach flowers, because the mental imbalance is usually a result of individual psychological problems, against which a single Bach flower is not effective.

Do you want to give your Cat Bach Flower Drops again, you should consult an expert who will recommend an individual mixture tailored to your cat.

By the way, you can use the so-called emergency drops for cats without any problems, because they contain a mixture of Bach flowers, which is equally effective for humans and animals.

You see: Bach flower drops can actually be helpful and have the advantage that they have no side effects. Try the drops yourself and see if they have an effect on you.

Where can I get Bach flowers?

Bach flowers are nowadays available in every pharmacy. Today you can also get Bach flowers here, for example:

Do you have questions, experiences or suggestions about Bach flowers? Then I look forward to your comment.

PS.: In the Natural Health Blog you get many more health tips for body & soul.

Stefan Hülsmann is the founder and managing director of the mail-order pharmacy Juvalis. As a pharmacist, he has years of experience and medical knowledge. He also writes regularly as an expert in the field of alternative medicine.