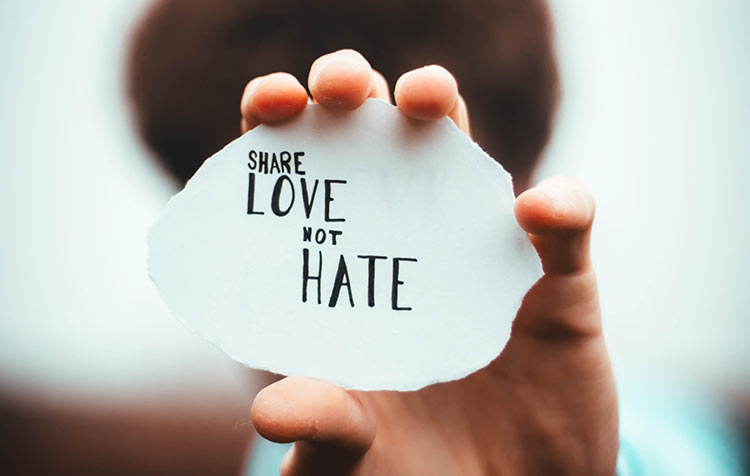 Stop hate on the web - 10 tips against online hate speech

You want to stop hate on the net? That's great! Have you ever been a victim of hate speech yourself, or do you just feel that the tone on the Internet has become much harsher and increasingly offensive? Here are the tips you need to put an end to this madness.

Use the following ideas and measures to actively fight hate comments, bullying and insults online.

Granted: This article seems a bit off-topic! However, it is particularly close to my heart - and since the way we deal with each other also contributes to the sustainable development of our society, the topic also has a certain sustainability relevance.

What is Hate Speech and why is it a problem?

The Duden dictionary defines hate speech as "Hate-spreading way of speaking or writing" as well as "Speech containing hate messages". However, it is also generally a generic term for the social phenomenon of group-related misanthropy and incitement to hatred on the Internet, in which there are always perpetrators and victims. Perpetrators insult, threaten, attack, and incite even more hatred, while the resistance of victims often fuels the hatred all the more. There are now even Organized hatredwhich right-wing networks, for example, deliberately stir up and spread in order to silence their victims.₁ Nowadays, the perpetrators usually get off scot-free because few victims file criminal charges or the police do not have sufficient capacity.

The State Media Authority NRW found in a study of 1010 Internet users over the age of 14 that 73 percent of them have already read hate speech and hate comments.₂ Hate on the Net is therefore a widespread, social problem and a form of psychological violenceThe consequences for those affected can include depression, sleep disorders and even suicide.

What to do against hate on the net? 10 tips & ideas

Unfortunately, there are always insults on the Internet, which we would never put up with at a meeting in public and would also not let others disregard. But on the net, these hate attacks are often tolerated - with fatal consequences for their victims.

I hope that with the following tips I can help to make the exchange on the Internet friendlier again and that we can stop the hate on the net.

1. do not ignore the hatred

We probably agree that it is simply ignoring hate comments cannot be a solution. At the same time, fierce resistance unfortunately often sparks even fiercer hate attacks and insults, because the perpetrators have simply been waiting for it.

But not disagreeing and not standing up against it only encourages Internet trolls and other haters even more. The danger that hate speech will develop into a "normal" tone on the web is then simply too great. No matter if you are affected yourself or someone else: Ignorance is worse than hate.

2. take the respective platform to task

The platforms share responsibility for ensuring a civilized exchange among their users, but they can't always detect and remove hate comments or threats as they arise. That's why you should Always report hateful videos, comments or postings directly to the operators and demand action. For this, it is best to also describe the respective incident.

3. counter the hate with positive comments

If we want to stop hate on the net, we have to support its victims and show solidarity. So, if you see a hate comment. just counter him with a "love comment".. True to the motto: Be yourself the change you want for the Internet 😉 .

Notice: The Quote from Mahatma Gandhi I have slightly modified for this topic. In the linked post you will find the most valuable sayings of the Indian freedom fighter.

There can't be enough love spread on the Internet. So when someone who has been confronted with hate speech receives support, it doesn't hurt to share that to confirm and also add a few nice and uplifting words.

5. never respond to hate with hate

Hate can never be the solution. Accordingly, you should not be tempted to react with hatred or violence as well. Otherwise the Hater gets suddenly Support of other users, which he does not deserve at all.

Normally, we flee and freeze in the face of verbal violence - or we go on the attack ourselves. Fortunately, one's own Train reaction to derailments and hate on the Internetso that it simply bounces off you and you can react in a considered manner. I think you'll take away the appropriate tips from this post.

6. report your experiences and observations to organizations

Reporting hate comments to specific organizations leads to faster deletion. Aside from taking direct action against hate speech, the reported data of countless victims can be used to improve the To make visible the extent of the problem. Hate must be pursued, clarified and prevented - and for this it is important to know against whom it is directed and from whom it comes.

Here are some places to go to report experiences of hate online:

7. seek help from others

Insults and threats can be a real burden. In any case, talk to others about it and seek help. Explain the incident to your friends and relatives and ask them for advice. In addition, even the well-mannered Exchange in forums and Facebook groups Remedy the situation. Because not all people are hateful. There are more victims than perpetrators - and more good people than bad.

Important Notice: if the often aggressive and hateful mood or personal insults and threats in the comment columns put a lot of psychological strain on you, then reduce your time on the web somewhat and don't be afraid to seek contact with a therapist.

8. realize that you are not the source of hatred

You are only the trigger that leads to the perpetrator's hatred being unleashed on you. The real problem takes place in the mind of the offenderwho feels triggered by a certain statement or external feature or behavior. This fact should help you deal with more incriminating comments.

"He who makes others next to him small will never be great." (Johann Gottfried Seume; I have brought you a collection of other inspiring Quotes Against Hate compiled)

9. set the limits yourself

You don't have to close yourself off - just show your community or other people on the web where the boundaries are to create a comfortable, fair and purposeful climate for discussion. Many platforms make it possible, for example, Block comments with specific, offensive terms. If you are an influencer or another person in the public sphere on the Internet, you should take advantage of these opportunities to combat hate speech and the consequences of psychological violence.

A tip by the way: Did you actually know how to surfing the internet more sustainably can? You can learn it in the linked article!

10. create awareness of the problem in our society

Verbal, psychological violence on the Net is a massive problem in our fortunately evolving society. But to solve it, we all need to understand that it is a serious problem. Therefore we should also talk about it with our families and friends, write blog posts - and Sign online petitions, who draw attention to hate on the Internet and actively campaign against it.

Start right now and support the petition "Stop Hate Speech on the Net!" at Campact.

Stop hate on the net by not looking away

Haters benefit from the anonymity of social networks - but anonymity also has its good sides. The solution to the problem is not simply to ignore Internet trolls and haters, but to stand up strongly against them. Because in the end, the good and emphatic people are in the majority - they just have to make their voices heard.

I hope that I could help you and maybe other people with this post. Do you have questions, suggestions or your own experiences that you want to share? Then just write me a - gladly also critical but still friendly - comment under this post 😉.

PS.: I have given you a whole list of Quotes About Positive Thinking that will help you get in a better mood when you come across hate comments again. Have fun!