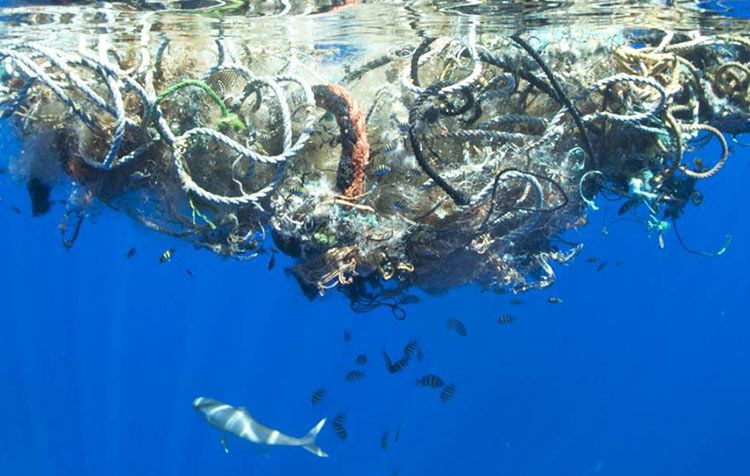 The 5 big garbage whirlpools in the sea

These are the 5 huge garbage whirlpools in the sea

It is estimated that there are about 1000 - 2500 g of plastic waste floating in each of these waste whirlpools per square kilometer.

How did the garbage whirlpools form in the first place? Why does the garbage collect at these 5 ocean eddies and where does all the plastic garbage in the garbage eddies actually come from? I would now like to answer these questions in more detail.

Origin of the garbage whirlpools in the sea

First of all, I would like to give you the scientific background of the garbage whirlpools in the sea and explain why the ocean currents exist. These are the natural and scientific reasons for the ocean vortices:

It is through the resulting ocean eddies and our unconscious handling of plastic waste that the large waste eddies in the sea occur in the first place. But where exactly does the garbage originate?

Origin of the plastic waste in the waste strudels

There are significant studies on the origin of the plastic waste in the waste whirlpools. I refer to the detailed study "The New Plastics Economy" by the Ellen MacArthur Foundation₄. The result shows that the industrial continents such as North America and Europe are responsible for nearly half of the world's plastic production, but only about 2% of the plastic waste in the ocean is generated directly by them. Southeast Asia has a real plastic waste problem, because these developing countries are responsible for about 80% of the plastic waste in the ocean. Developing countries in Africa and South America also have a high share of plastic waste in the sea. In these countries, poor recycling systems, lack of education and, as a result, unconscious consumption are the order of the day. For these very reasons, plastic is rarely recycled. The garbage ends up in landfills and blows into the sea, if it is not already directly into the sea. Plastic was suddenly there and had many advantages. Now we get to see the disadvantages due to the garbage whirlpools and urgently need to do something. Here is another video that describes the garbage whirlpools in their formation very well.

According to the study Plastic Debris in the World's Oceans₅ conducted by Greenpeace International, about 80% of the plastic waste in the sea is generated on land. Sooner or later, the weather ensures that the waste reaches the sea either directly from the mainland or via rivers.

So it is by no means possible to simply claim that only beachgoers are to blame for the plastic waste in the sea. No, it's all of us. Because even a household in Frankfurt, in the middle of Germany, far from the sea, is driving plastic waste into the sea every day. How? Through Microplastics in cosmetics or by washing the laundry, which also contains plastic fibers.

We find pretty much every kind of plastic waste in the garbage swirls. This shows once again that the plastic objects themselves are not the problem, but only the fact that we handle them poorly.

What do garbage eddies in the sea mean for nature?

You certainly know that plastic is not biodegradable. I recommend you also my article What is plastic anyway? to read. The plastic may "decompose" over many decades into smaller microplastics, but once it is created, it remains forever. This also applies to the Plastic waste in the environment and in the sea.

"Every little piece of plastic that was manufactured in the last 50 years that got into the ocean is still there somewhere." - Tony Andrady, chemist at the American Research Triangle Institute.

So every piece of plastic waste that we allow to enter the oceans is still out there and has to be collected again. That's because marine animals eat pieces of plastic. The toxic plastic, for example, passes into the cells of fish, which eventually end up back on our plates. What consequences Plastic in the food chain has on our health is still largely unexplored. But it cannot be healthy.

The devastating consequences of the garbage whirlpools in the sea

We can't just ignore the plastic waste whirlpools, because they are getting bigger every day. By 2050, there will be more plastic waste in the ocean than there are fish. We are destroying our planet and eliminating the waste vortices is our last chance. Now and not in 3o years. Here I would like to explain the consequences of the garbage whirlpools for our health, for nature and for the animal world:

We have created one of the biggest environmental problems of our time through the garbage eddies in the sea. It is time to correct this mistake.

What can we do about the garbage whirlpools?

Conclusion - garbage vortex in the sea?

The garbage whirlpools in the sea are there. And they continue to grow with each passing day. Diseases are being transferred to new areas, more and more microplastics are getting into the cells of fish, and masses of birds and marine mammals are dying as a result of the waste-laden ocean eddies. It's long past fun and we need to act. Because the trash problem is getting out of control. But together we can eliminate the garbage whirlpools. Through conscious consumption and a new, contemporary awareness. The Zero Waste lifestyle gives a lot of hope.

I look forward to your opinion, questions or suggestions.

PS.: If you have scrolled up to here -> Be sure to join our global Facebook group CareElite CleanUps and who knows: Maybe you will soon organize your first own CleanUp against the further growing garbage whirlpools!