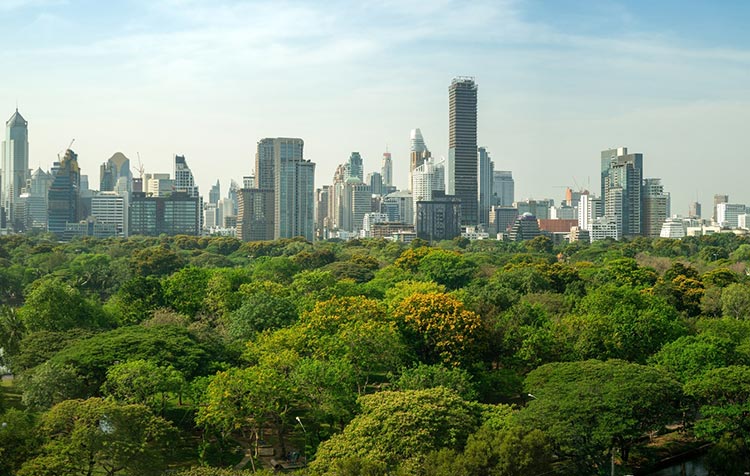 Green cities - About the connection between city and nature

What are green cities and how can you combine city and nature in the most meaningful way? If you're asking yourself these very questions, you've come to the right place!

Big cities offer a wide range of cultural activities, a variety of interesting employers, an excellent infrastructure, and the opportunity to network with people from different cultures and professional backgrounds. Young people in particular are drawn to big cities to take advantage of these benefits. But anyone who has ever lived in a big city for an extended period of time has long since noticed what is too easily missed out there: proximity to nature.

In this article, you'll learn why proximity to nature is so important in metropolitan areas, why it has long been marginal in big cities, and which cities have already successfully reversed this gray principle. Let's go!

Why is nature so important in the city?

The list of reasons why green spaces make sense, especially in cities, is as long as it is obvious. First, there is the climatic aspect. This is because green spaces not only clean the air and produce valuable oxygen, but are also responsible for temperature regulation, filter drinking water and are habitats for many different species of animals. They therefore counteract, for example, the Climate change, the Air pollution and the Species extinction against.

But nature also serves man as a Retreat. Far from the hustle and bustle of the big city, residents find peace and relaxation and recharge their batteries. Nevertheless, nature has been increasingly squeezed out of metropolitan areas in recent decades. Yet city and nature are not opposites, but benefit from each other in many ways. Particularly for large cities, there are many concepts for how to Integrating nature into the city in a meaningful way can. Because reconciling these two factors is of high importance.

Tip: You can also find a post about it at CareElite, why you should spend as much time as possible in nature. Certainly a nice addition 🙂

Trees are essential for human life

The term "green lung" is actually used as a synonym for the rainforest. The forests produce the oxygen without which humans could not live on this planet. Vast amounts of carbon dioxide are also bound there. In cities, the term tends to refer to the meadows and parks. But the principle is the same.

Trees contribute to this like no other plant, clean the air of the big city. With their leaves, they filter dust and particles such as traffic and industrial emissions from the air. Through photosynthesis, trees convert carbon dioxide into nutrients for their own use. As a byproduct of this process, they produce Oxygen free that we breathe.

In addition, the trees still provide shade in the summer and also have a cooling effect through the evaporation of water through the leaves. They thus reduce the heat load in the cities and serve as air conditioning, so to speak, for the conurbations. They are also a habitat for many different creatures such as birds, squirrels and a variety of insects.

During the Rainforest cut down to make room for monocultures and factory farming, the trees in the city have had to give way to man's Habitat development to make it possible. Ultimately - and in the truest sense of the word - we are sawing the branch on which we are sitting.

Due to the steadily growing population of the earth and the increasing rural exodus, more and more space in large cities has been developed for new housing sacrificed. As a result, not only did many green spaces disappear: many Floors were also sealed.

When you seal surfaces with asphalt, concrete, pavers or other materials in whole or in part, it has several ecological effects:

In addition, the soil fauna permanently damaged becomes when it is separated from oxygen and water for a longer period of time. The fertility of a sealed soil is not permanently destroyed - but restoring it is very complex, time-consuming and therefore very expensive. It is also almost impossible to prevent foreign materials such as concrete or plastic from remaining in the soil. This is another reason why it is important to preserve nature in the city from the very beginning, if possible.

The car displaces nature and man

Another reason for the disappearance of green spaces is the Car. After the end of the Second World War, people took advantage of the destruction of the cities to to be planned and redesigned. The separation of living, working, shopping and traffic were the basis of the new vision: the car-friendly city.

The city centers in particular needed to be more accessible by car. Wide streets and large parking areas were needed, and for that Green spaces sacrificed. This sealed even more floors.

The architects of the time also did not stop at demolishing historic buildings that had been spared from the bombs in order to make room for mobility. In Hannover, for example, the Flusswasserkunst on the Leine or the Friederikenschlösschen fell victim to this way of thinking.

However, cars have not only displaced nature, but also people. Children in particular felt this effect. For they played mainly in the streets until after the end of the war. However, due to the increasing number of cars, there were more and more fatalities.

The consequence was that children had to be kept off the streets, which henceforth belonged to the cars. Thus the first Playgrounds as shelters for children and to ease the burden on motorists.

The Number of cars registered continues to increase today. 48.2 million cars are registered in Germany. More than half of Germans commute less than 10 kilometers to work. Only 13 percent use public transportation.

Tip: How you live as car-free as possible you can find out in the linked article.

Reversing the trend from car city to green city

Gradually, people realized that it was necessary to follow the Counteract overexploitation had to be carried out by urban planners and architects after the end of the war with what was then considered modern urban planning. This created, at least in parts, a Rethinking.

For example, the demolition of historic buildings after the war was counteracted. In 1980, the city of Hildesheim rebuilt the historic market square with the Knochenhaueramtshaus after it fell victim to urban planning in the 1950s.

From the state side there are more and more Incentives for decision makers, to reverse the former trend. Competitions like the Federal Award for Urban Green are intended to motivate bringing nature back into the cities.

There are many innovative ideas to connect the city and nature. The approach of the Urban Gardenings uses areas in residential areas or pedestrian zones, for example, to create small flower meadows in planters that can serve as new habitats for insects.

House roofs can be greened or converted into small gardens. This not only has climatic effects, the roof gardens offer a near-natural Retreat in the middle of the city. They also give people the opportunity to be at least partially self-sufficient in food.

Kindergartens and schools have the option of converting the break yard into garden-like green spaces. These are then used not only as Habitat for animalsbut also used as an experiential space for children. In this way, they can experience nature up close and actively participate in shaping it, and gain access to the plant and animal world at an early stage of development, which in turn is a fundamental Environmental awareness creates.

A well-known example of the integration of green spaces is the big city is New York with its green lung, Central Park. This serves as a retreat and recreation area for city dwellers and plays its part in improving air quality.

Here you will find the world's greenest cities in the overview:

Which cities in Germany are exemplary green?

But countless German cities are also innovating the Path to a green future. The city of Hagen, for example, is the greenest city in North Rhine-Westphalia. Almost half of the city's area is green. Across the entire city area extend 24 Nature reserveswhich serve as recreational space for the residents and are also home to an impressively large variety of species.

Bremen has also become a prime example of green metropolitan areas. They are spread over the entire city area and thus accessible from almost everywhere by short walking distances. The Rhododendron Park located in the northeast is also the second largest collection of rhododendrons in the world.

Hannover also shines with its large share of urban greenery. With more than 40 parks in the city area, the city has the largest park density in Germany. These include numerous bodies of water such as the Altwarmbüchener See, the Ricklinger Kiesteiche, the Maschsee and the lakeside promenades along the Leine.

Can you think of any other green cities? In Germany, Dortmund, Stuttgart, Würzburg, Heidelberg and Hamburg, for example, also score very well in terms of urban nature!

The cities of the future are green!

So in Germany, too, there is reason to hope that in the future life in cities will once again be more livable and closer to nature. Under no circumstances should we move further away from nature - because we are as much a part of it as all life on this planet - and not a superior species.

I hope that I could give you a little courage for the future with this article and bring you closer to the advantages and ideas of an environmentally friendly, green city. Do you have any questions, tips or suggestions? Then I look forward to your comments!

PS.: Do you already know the Soft mobility concept? In the linked article, you can now learn how it can make life in cities more sustainable and enjoyable. Have fun!