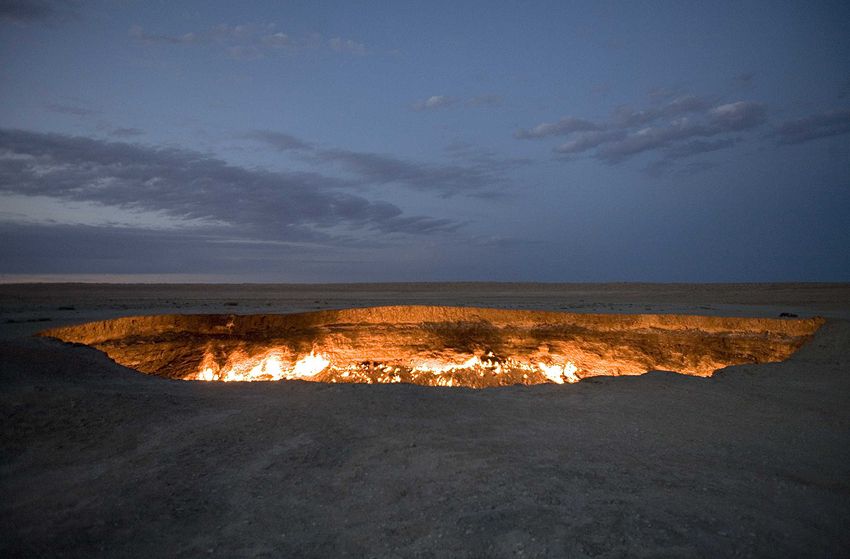 Formation of the crater of Derweze in Turkmenistan

The crater of Derweze was not formed quite naturally, the impetus for this natural wonder was, as so often, us humans. In Turkmenistan, and especially in the Karakum desert, there are significant oil and gas deposits. When geologists were drilling in the desert in 1970, the ground suddenly collapsed. A huge crater was created without anyone being hurt. The meaning behind the decision that followed was not immediately apparent to me, but the geologists decided to burn the escaping toxic gases, hoping that the flames would quickly die out. However, nature had something else in mind. Today, the flames are still burning because they simply could not be contained. All attempts to extinguish them failed.

Although Turkmen President Berdimuhamedov personally visited the crater in 2010 and ordered its closure in order to shut down other surrounding natural gas fields, Derweze's crater is still burning today. Burning the escaping methane produces carbon dioxide, which is much more environmentally friendly than methane that flows directly into the atmosphere. As a result, the crater of Derweze is still burning today and has more than earned its nickname "the gateway to hell".

Tourism at the crater of Derweze in Turkmenistan

The country of Turkmenistan welcomes only about 15,000 tourists a year, which is why the crater of Derweze in the Karakum Desert can still be called a real insider tip. I'm actually not a fan of making such unique places a tourist attraction, but since several years have already been reported about the crater the number of tourists is only slowly increasing, I think it's okay.

It is also difficult to destroy anything at this natural wonder. Because if you venture too close to the crater, you risk falling into the depths with the loose rim. By the way, a large part of the Karakum desert was declared a nature reserve in 2014 to protect nature and also the crater itself. The crater of Derweze and Turkmenistan in general is in any case on the list of my travel destinations.

Experience the crater of Derweze and Turkmenistan for yourself

Besides the crater of Derweze, the country of Turkmenistan has much more to offer. The Karakum desert alone has a size of over 400,000 square kilometers. Since 2015, the country of Turkmenistan has been opening up more and more to tourism, so that the variety of offers in this wonderful country is also increasing. The city of Awaza is located directly on the Caspian Sea, where you can spend a nice vacation time. The capital Asgabat and the cities Merv, Köneurgenc and Nisa are very ancient and are wonderful for a city trip. I recommend in any case to fly to one of the two airports Ashkhabad or Türkmenabad. Also at AirBnb there are very good offers as an alternative to the hotel.

It's always great when you can get the best tips from people on the ground. I wish you a fantastic experience in any case.

PS.: If you want to see and experience more nature, just click through my entire Nature Travel Blog. Have fun!