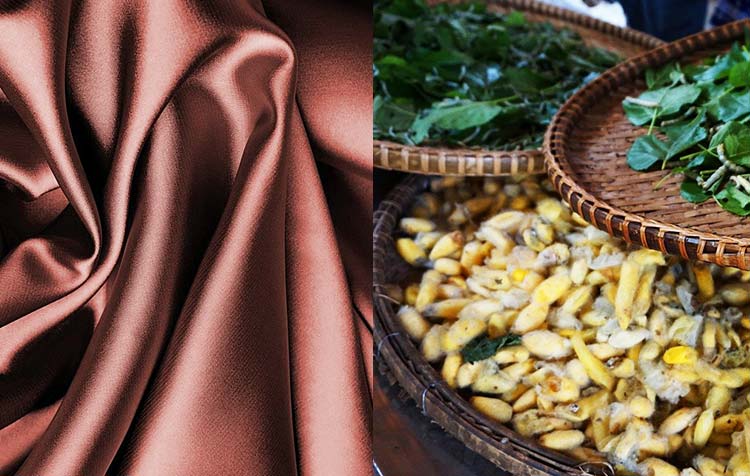 Is silk vegan and sustainable, or not?

Is silk vegan, or not? The soft, quick-drying and shiny fiber fabric is extremely popular and, according to current knowledge, also the only textile continuous fiber occurring in nature. Blouses, dresses, underwear, shirts, pajamas, scarves, bedding and even respiratory masks, for example, are made of it. Most people would probably assume that animals play rather no role in the manufacture of silk products. But in fact, it is a textile material with an animal origin.

In this article I would like to show you briefly and concisely why classic silk is not suitable for vegans and what alternatives are available to us. Let's go!

Why classic silk is not vegan

Silk fibers are obtained from the cocoons or the yarn of the "silkworm", which consists mainly of proteins. It is the larva of a butterfly originally native to China, the silk moth. Today, the production takes place mainly in Southeast Asian countries such as China, India or Japan and is unfortunately the absolute opposite of an animal-friendly production. And it is precisely for these reasons that silk is not vegan, however small and "inconspicuous" the animals may be.

What happens during the production of silk (with the animals)?

Silk production in a nutshell: first, you place the silkworm's eggs in closed containers in paper. After about a month, the silkworms then begin to spin the cocoon around themselves and completely envelop themselves in the "desired" silk thread. Subsequently scald them alive in boiling water or kill them with gas, so that they do not break out of the cocoon as moths and tear the long silk threads.

A University of Illinois study found that. about 6,000 worms or silkworms have to be killed to produce one kilogram of silk.₁ In the manufacturing process, however, some animals are deliberately allowed to survive so that they hatch from their cocoons as silk moths and lay more eggs to produce more silk.

Then you feed the caterpillars with mulberry leaves until they are about 9 centimeters tall. Furthermore, for the production of the highest quality silk possible, one selects only the healthiest caterpillars. Unfortunately, the butterfly has been mercilessly overbred, so that it is susceptible to diseases and barely able to fly ₂ This is hardly visible to us consumers. Cruelty to animals in the production process probably makes only a few people claim that silk is vegan.

Notice: Apart from the extraction of silk fibers, the caterpillars also serve as feed for domesticated animal species, such as cows or chickens. In some countries, they are also a directly consumed human food.

So we certainly agree that silk is not vegan. But it can at least be used with a basically sustainable lifestyle agree?

In production, the animals eat the leaves of the mulberry tree, which must be grown for them. Silk is called organic already when the animals are controlled organic mulberry leaves as a main dish were allowed to enjoy. About 2.8 trillion caterpillars are killed every year in the production of silk₃ - accordingly, as in the classic Factory farming, also the production of silk through the "detour animal" with an avoidable waste natural resources connected.

And even if the silk fabric is basically biodegradable and easy to dye, its sensitivity additionally gnaws at the eco-balance. Silk namely cracks very quickly and requires extremely careful care. Otherwise, silk products quickly end up in the garbage can and make the elaborate production including animal suffering anything but sustainable.

What sustainable and vegan alternatives are there for animal silk?

Even organic silk is not automatically sustainable and basically not vegan. So we should look for environmentally friendly and animal-friendly alternatives.

Rayon (artificial silk), for example, is a material obtained from naturally occurring cellulose, such as bamboo fibers. Also Soy silk, modal, Tencel or Lyocell can replace the popular benefits of silk. Just take a close look at the product label when shopping or ask the sales staff to help you choose a sustainable and vegan alternative to classic silk.

Notice: There are also so-called "Peace Silk" or also "Ahimsa Silk" in the production of which the silk moth is allowed to leave its cocoon alive. Ultimately, the thread is not as long and the manufacturing process is more complex, which in turn is reflected in increased costs for the consumer. In addition, it is still the exploitation of animals.

Focus on vegan silk or its alternatives in the future

The proteins give the silkworm caterpillar's yarn its suppleness. But for vegans, who - as far as practical. no longer participate in the exploitation of animals want, silk fabrics are unfortunately unsuitable. In addition, the production is also not recommended from an ecological point of view. Fortunately, there are many sustainable and vegan alternatives for silk that we can rely on for our textiles in the future.

I hope I could help you with this article about the connection between silk and veganism. Do you have any questions or suggestions? Then I look forward as always to your comment!

PS.: Look you with pleasure still something in the Animal Welfare Blog around! There you will also learn, for example, why we humans should refrain from following the latest trend and Eat insects. Have fun!