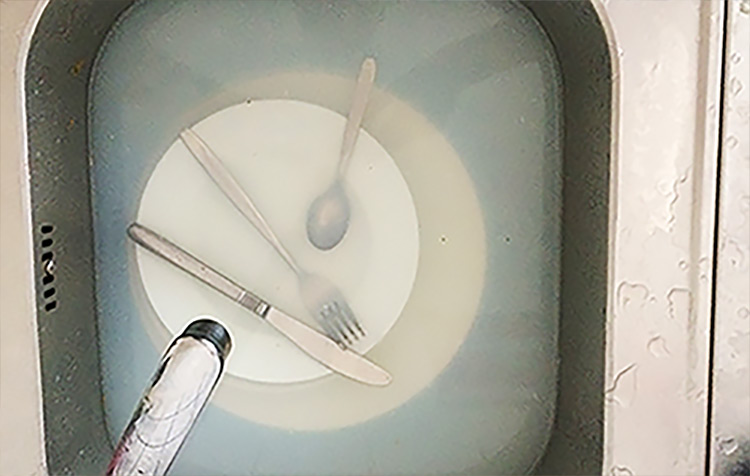 You need a container, of course, so that your homemade detergent does not run away 😉 To do this, you should either reuse the bottle of your old detergent or find a suitable glass bottle. A large glass jar will work in principle, but it's best if the opening is not so large. This is the basis for making your own dishwashing liquid.

Plant soap is natural without any artificial additives. Ideal to make your own dishwashing liquid. Get the best this aleppo soapIt consists of 60% olive oil and 40% laurel oil. You will need to grate these later for your homemade dishwashing liquid. Get yourself such a plastic free graterif you do not already have them in your kitchen. The plant soap comes completely without palm oil and is not only good to make your own dishwashing liquid, but is also the ideal plastic-free replacement for the handwashing soap from the plastic dispenser. The soap is also made without animal testing, is suitable for all skin types, and is biodegradable. Rubbing the soap takes about 3 minutes.
You can order the Aleppo soap online without plastic here

If you want to make your own dishwashing liquid, you should definitely get some baking soda. Since baking soda has a grease-dissolving effect, it's the perfect, plastic-free alternative to chemical ingredients in conventional dishwashing detergents. In addition to using it in your homemade dishwashing detergent, you can also use baking soda as an all-purpose weapon for many other things around the house. You can use baking soda to make your own bath balls, for example, or to remove odors from textiles or even stains from carpets. Just get yourself some more baking soda right away, in the supermarket you usually only get a few grams at overpriced prices.
Here you get soda plastic-free and much cheaper than in the supermarket

How to make your own plastic-free dishwashing liquid

When the Aleppo soap is grated and all the other ingredients are ready in the mentioned quantities, you can bring the 500 ml of water to boil in the saucepan. The water is the basis for making the dishwashing liquid yourself.

From now on, you can add all the ingredients for your homemade dishwashing liquid to the boiling water. First, add the 25 g of Aleppo soap to the pot.

Now it's time to add 2 tsp of baking soda to the boiling water. Baking soda dissolves grease and cleans and is a great plastic-free, natural alternative to chemical dishwashing detergent. Two teaspoons of baking soda is all you need.

Fill the detergent and shake vigorously

The dishwashing detergent that you have now made yourself is somewhat different in use than the chemical dishwashing detergent from the plastic packaging, but just as uncomplicated. You have to use a little more of the homemade washing-up liquid, as we have not used any aggressive, chemical ingredients for the production. Leave the plastic-free detergent on for a few minutes longer than with conventional detergent. For stubborn layers of grease, you can then add a little more detergent.

Dishwashing liquid make yourself with ivy

Another alternative to make your own dishwashing liquid is ivy! Ivy contains so-called saponins, which make the plant ideal for a homemade dishwashing liquid. Ivy grows everywhere and especially on tree trunks and house walls. You can get the leaves all year round, as they are permanently green. You can't get more natural than that.

How to make your own dishwashing liquid with ivy:

If the jar is not the ideal solution, you should now pour your homemade dishwashing liquid from ivy into a container that is better for you. You can now use it to wash your dishes naturally by hand. If you want to use it for the dishwasher, you should add washing soda. Put the detergent in the refrigerator so that it lasts as long as possible.

Dishwashing liquid make yourself with lemons

Plus 2 canning jars for storage. That is already everything. Simply quarter the lemons and put them in the blender. After they are pureed, add the 200 g of salt and mix again. Then put the mixture in a saucepan with the water and the apple cider vinegar. Now you can bring the pot to a boil and wait about 5 - 10 minutes. Afterwards, sieve the whole thing again so that you only have the natural dishwashing liquid. Pour the detergent into your containers and your homemade lemon dishwashing liquid is ready. It does not foam, but makes the glasses really nice clean. Natural and plastic-free. If you want to know more, be sure to check out the nice video tutorial below:

Were you able to make your own dishwashing liquid? Did it foam? Just write me in the comments. Why do we always have to buy everything when we can make many things ourselves naturally & plastic-free? The Zero Waste Lifestyle makes everything more natural and simple. I hope you're happy with your own homemade dishwashing liquid.

Do you have any suggestions for improvement or better ingredients to make dishwashing liquid yourself? Then just write me in the comments.

PS: Learn in the Do It Yourself Blog for example also how you Make toothpaste yourself can!