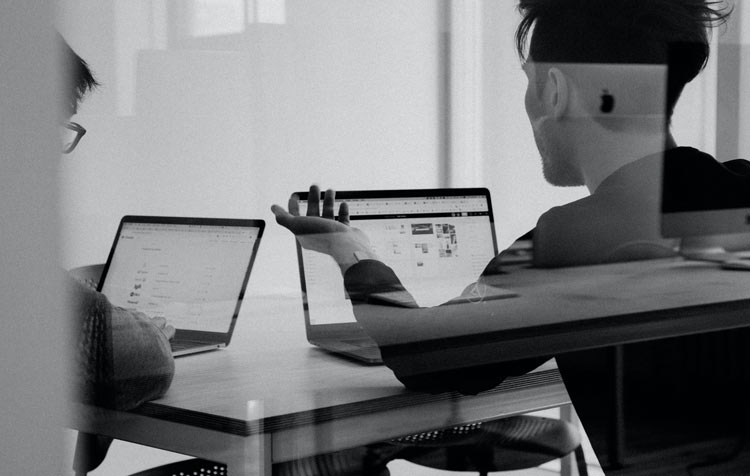 How can you improve your critical thinking skills? If you are looking for an answer to this question, you have come to the right place! Being able to take criticism means accepting objectively formulated and justified criticism in order to develop yourself further. I used to see that differently - and basically hated feedback. Today I love factual and constructive criticism in all colors and forms - even if it was a rocky road until then!

In this article, I would like to give you some valuable tips on how to deal better with criticism. After all, good critical faculties are probably one of the most important social skills for long-term personal development. Let's go!

Here you will find in advance a short Overview about the contribution:

You can usually recognize a lack of critical faculties when your counterpart doesn't let you finish or doesn't even listen to you properly and instead is already waiting to be able to defend himself directly.

But listening is really essential to learning how to handle criticism! This is the only way to find out what your critic has to complain about. Let him finish and then react to the individual points he raised. You can calmly refute some of them logically and use justified aspects for yourself.

Tip: Listening attentively, by the way, is also an important means to Convince people. In the linked post, you'll also get countless more tips for better argumentation.

2. Take distance and nothing personal

We humans love to be liked by others. A critic obviously recognizes faults and weaknesses, which is why his feedback often inevitably provokes a defensive, justifying or even attacking reaction in us.

So if you want to improve your critical faculties, you should internalize that critical feedback is rarely really directed against you personally. Rather, it is about situations, facts or decisions. So, by default, consider the feedback of others as Chance of improvement and not as an attack on your person.

3. pay attention to the body language

And on your own, but also on that of your counterpart. When we have a person in front of us who crosses his arms in front of his chest, makes snide gestures, and then puts on a look of disbelief, it tends to show defensiveness and poor handling of criticism.

4. Deal with what has been said

There's a reason you're being criticized - and it's an exciting opportunity to find out! However, if you don't respond at all to the critic's spoken words and directly voice inappropriate counter-criticism, you reveal poor critical faculties and plenty of room for improvement.

Instead of getting angry about it, you should be use justified and constructive criticism for your personal development. And if the criticism is unjustified? Then you should explain your criticized action and present the advantages in order to bring about a solution and agreement.

5. Compare self-perception and perception by others

If someone criticizes you for something, it can of course be a single opinion that hardly anyone else would share. But for many people, self-perception differs (how do i see myself?) depends very much on the external perception (how do others see me?), so that the greater this difference, the more often there are critical disputes and disagreements with others.

In order to be able to improve your critical faculties, you should therefore always check your self-perception and the perception expressed by others. soberly, openly and honestly match each other. If the criticism is justified, then learn from it. And if it is unjustified, you again justify your actions logically so that a conflict resolution can be brought about.

Tip: Seeing criticism as something great has really been extremely good for my personal development, in my opinion. In a separate post, I'll also introduce you to some more Books that have changed my life for the better. Look gladly times purely!

When criticism comes our way, spontaneous justifications are a typical reaction. Many lash out with empty phrases and also simply blame others - whether other people or circumstances. But in order to seriously evaluate what has been said, to be able to respond appropriately, our brain simply needs some time of rest.

Therefore, you should let the criticism sink in first, instead of directly counterattacking with justifications. Take a breath and then respond with some distance. If the criticism is justified, then accept it and learn from it for the future. And if it is not, then justify your actions soberly and logically, as always. Basically, however, you should be open to any words of your critics and also be ready to change (positively) at any time.

Anyone who does not even listen to the content of the critic obviously has no interest in learning from the criticism. This is a clear sign of non-existent or poor critical faculties. If you want to improve it, you should instead listen and, above all, ask questions, if you feel that what has been said has not yet become completely clear or you need more information for your answer.

This shows your counterpart, for one thing, that you are interested in his opinion and also provides you with valuable information for your answer or your learning from the criticism. By asking questions about the content Understanding and interest is a clear sign of really good critical faculties and creates opportunities for one's own personal development.

Tip: If you are the critic, you should also praise your counterpart. Because praise gives criticism more weight and increases the likelihood that it will get through and make a difference.

8. Postpone the discussion in case of too much emotionality

If one of the two people discussing the issue is not capable of criticism, a disagreement can quickly degenerate into an emotional argument. When it gets louder, this is more a sign of poor critical faculties and low potential for timely agreement.

In such cases, try to take a breath, remove the emotions from the conversation and return to the core of the criticism. If this does not work, it makes sense to postpone the conversation until the next day. With a little distance you can try to keep it sober, factual and purposeful.

9. Always be open and grateful for criticism

Many find criticism fundamentally annoying, annoying and nasty. But actually it always represents a Opportunity for positive change in one's own personality present. Always be aware that your counterpart also knows that criticism is unpleasant for most people - and usually only wants to help you with the feedback.

"He who flatters me is my enemy, he who rebukes me is my teacher."

Accepting objective criticism and learning from it is therefore much easier if you see it for what it is: a Suggestion for improvement that shows that you are important to your counterpart.

Criticism points us to potential for improvement and thus to challenges. Some people may shy away from challenges - but they are actually the most exciting thing in our lives and our personal development. By improving your critical faculties, you can ultimately only improve yourself..

The Will to grow from critical words You should show your counterpart quite openly that you don't want to do that. This makes it clear that you accept their opinion and can handle feedback very well.

Objective criticism is something great! How you deal with it shows me as your counterpart whether you strive for improvement or whether you shy away from conflict and rather see the faults with others. A lack of critical faculties will close many doors in your life - On the other hand, constant openness and the courage to change are valuable keys. So use critical feedback for your development instead of getting angry about it and mistakenly seeing it as an attack on your person!

I hope my tips from this post can help you improve your critical thinking skills. Do you have any questions, suggestions, or your own experiences with handling criticism that you'd like to share? Then just write me a comment.

PS.: You want to know, why we humans find change so difficult? In the linked article you'll find out now. Have fun!