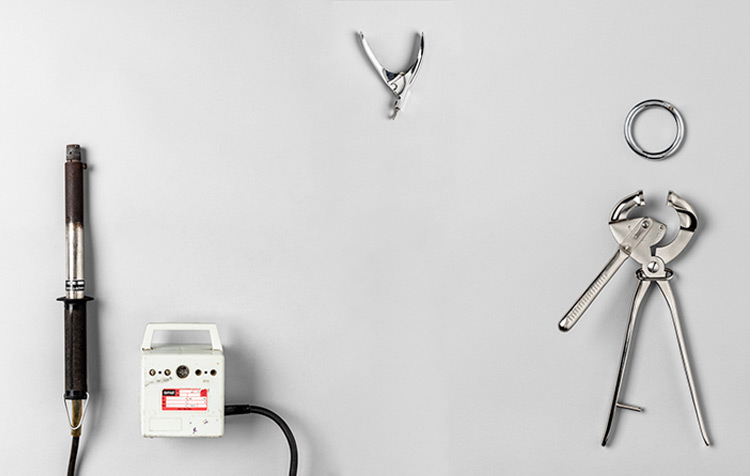 You want to learn more about the tools of Factory farming know? Then you've come to the right place. In order for the animals to track in "modern animal husbandry" and to end up with the greatest possible yield, the operators of the facilities rely on certain tools and aids. These help them to adapt animals such as cows, pigs and chickens to the breeding system.

In this article, I would now like to briefly introduce you to the equipment and instruments that are part of the standard equipment of agricultural animal husbandry. Let's go!

In advance you will find here as always a short Overview about the article:

Notice: This article only represents the permitted, official tools of factory farming and is intended to educate about the background of the industry. The image rights are held by the photographer Timo Stammberger.

Whether it is a dehorning tool, a dehorning device, a soldering iron or an electric dehorning tool - the exact name is irrelevant. With this tool several hundred degrees hot animal breeders destroy the horn or horn base of cattle and calves, so that the animals can be kept in a confined space without injuring themselves. Because the closer, the more profitable.

The burning rod finally obliterates the nerve and blood vessels of the horn. This procedure is generally permitted under the Animal Welfare Act with the administration of painkillers and even without anesthesia for calves under six weeks of age.

Maybe you've seen cows or calves with a spiked nose ring? This is called a teat. Actually, the calves are already separated from their mothers after 1-2 days, so that they can suckle the Breast milk to be sold profitably to us consumers, of course, do not drink away. But the jagged ring also keeps the young animals from drinking the milk of other cattle later on, as they are either suckled by the metal prongs directed outward be stung and reflexively dodge.

This tool of factory farming is basically self-explanatory. With Electric shocks of about 6,000 volts you drive the animals like cows or pigs that do not want to go further. The stun gun may actually only be used on certain parts of the body - but in practice this regulation is often not taken seriously. In the end, the animals are also driven towards certain death in the slaughterhouse.

These tongs are used to shorten the very sensitive beak tip of chickens. In factory farming with only a few square centimeters of space, between countless conspecifics in dark halls, the animals often develop Behavioral disordersso that they hurt each other. With the help of the beak shortening pliers, these injuries should be prevented.

Industrial agricultural entrepreneurs do not give their animals names, but numbers. In order to Identification To attach the tags to the (especially young) cows, piglets or lambs, they are pierced in the ear with ear tag pliers without anesthesia. As a result, inflammation can occur. Another danger is the subsequent tearing out of the tag.

In breeding, one castrates the male animals, which have less good genetic material. Furthermore, castration with the so-called emasculator serves to stop somewhat wilder and more quick-tempered animals. The term castration may sound less cruel than it actually is. With the help of castration forceps for example, one cuts the spermatic cords of male pigs, goats and sheep - for young piglets this is allowed even without anesthesia.

Another tool of factory farming is the so-called stuffing tube. It is pressed into the necks of geese and ducks in the fattening process in order to feed corn porridge and other Force feed high calorie foods in large quantities to be able to do so. The animals thus reach ten times their normal weight at record speed and can be sold more quickly and profitably as foie gras.

With a copper tool The ring tail of piglets is cut off within the first four days of their life.The sensitive animals often bite each other off in the confined space. This process usually takes place in agricultural animal husbandry without prior stunning.

One of the typical tools of factory farming is the tooth grinder, which is used to grind the teeth of young piglets in particular. pointed teeth ground smooth are not allowed to suckle. This happens because the animals could otherwise injure their immobilized mother - because she is fixed in the narrow crate - during suckling. Such measures serve the economic optimization and usually do not have the welfare of the animal in mind.

To artificially impregnate cows, the bull semen must be "obtained" in advance. This is helped by an electroejaculator set, which usually consists of a Carrying container, a Rectal probe, a Control unit, a Battery charger, a Electric cable and a Cable for the probe and vessels exists to collect the seed. At a voltage of less than 9 volts, seed emission is already achieved in many cases.₁.

Tip: Cows need to be milked is a popular argument to justify the consumption of dairy products. In the linked article you will learn why it is not logical.

Everyone has probably seen a bull with a nose ring. The is there, of course, not natural, but only with the help of a nose ring pliers, which the Bull nasal septum usually cuts through without anesthesia and leaves a hole for the ring.

In order to ensure that the animals remain healthy for as long as possible and do not attack each other, they are injected with hypodermic syringes, e.g. Hormones, vaccines and antibiotics. Ultimately, however, the meat of the animals that is consumed by humans is also contaminated with it - which can lead, for example, to antibiotic resistance and serious health consequences.

Tip: Also for these reasons, a balanced, purely vegetable diet healthy. In the detailed article you will learn more reasons.

In addition to the stun gun, many animals in the industry are also propelled with objects such as a classic wire brush. The "Soko Tierschutz" uncovered that some companies use the Wires for this even pierced the genitals of the animals.₂ A not surprising form of illegal Cruelty to animals in factory farming.

This tool of factory farming jabs a metallic bolt into the head of "slaughter animals", to stun them. Unfortunately, false stunning often occurs, so that the animals are still fully conscious when they are slaughtered.

Notice: There are, of course, countless other devices used to adapt animals such as cows, pigs or chickens to the industry. The castration scalpel, the Collet chuck or the punch, for example. Do you know any other instruments from factory farming that should not be missing from this list? Then feel free to share them in the comments.

Everyone should know the tools of factory farming

Why should everyone know the tools and implements of factory farming? On the one hand, to have a Better understanding of the growing vegan movement to get - on the other hand, to question whether the vegan lifestyle even not better themselves with the own, personal values fits together. Either way, each of us should know what happens to the creatures that are eaten by us humans.

I hope that with this article I have been able to make you aware of the equipment and activities of a livestock farm. The really scary thing is that these tools are basically used in all livestock operations - the bad as well as the good.

Do you have any questions, suggestions, or other experiences with the tools of factory farming that you'd like to share? And what do you think when you see the tools shown? Feel free to write me a comment.

PS.: Dogs and cats get treats and scratching posts, cows and pigs antibiotics and electric shocks. This unequal consideration of domestic and farm animals is called Speciesism. In the linked article you can now find out what's behind it.