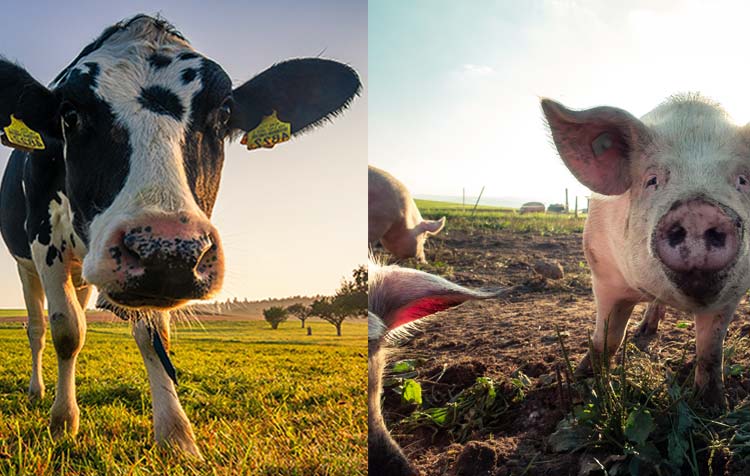 You want to learn more about animal idioms, which tend to be animal-hostile and speciesist come along? Then you've come to the right place! Idioms help us in everyday life to present complex situations and facts in a simpler and more understandable way. To be a great pike, smart as a fox or the best horse in the stable are positive examples. Over the centuries, however, a conspicuous number of proverbs and sayings have become entrenched in our language that are tainted with questionable prejudices and cast animals in a particularly bad light.

In this article, I'd like to introduce you to ten of these aging sayings involving animals and their animal-friendly, vegan alternatives. Plus, I'll list some more sayings for you to ponder. Let's go.

Important Notice: Please don't take everything in this post seriously - rather, consider the content as a sign of linguistic progress of a compassionate society that respects all human and even non-human animals.

If, for example, you pass by the dry cleaners on your way to the organic market to drop off your laundry, you literally kill two birds with one stone. Opinions differ as to the origin of this saying. In all likelihood it is to a fairy tale by the Brothers Grimm. The "brave little tailor" killed seven flies at once with one rag. Work productively and efficiently and act is laudable, but the saying implies the suffering of animals. As a vegan, I simply do without this expression and choose a more animal-friendly expression instead.

Pet-friendly alternative: do two things at once

2. making an ass of yourself

The origin of this animal idiom is said to lie in the fact that in former times jugglers with animals (also monkeys) performed at fairs. Since they have been trained to obey, people nowadays also talk about making monkeys of themselves to others. In fact, however, monkeys are extremely intelligent animals - and not least very close relatives of us humans. Out of respect for the animals, we should resort to other sayings.

Pet-friendly alternative: make a fool of oneself

All of us have probably been criticized so harshly at one time or another - perhaps even in public - and possibly also yelled at, that we felt totally small after the accusations. In our current parlance, we have been "made to feel like a slug" at such times. The expression is mainly due to the cautious behavior of snails, seemingly intimidated to crawl into their little houses. But also snails are Animals with feelings - and do not need to be offended by us.₁

This animal idiom comes from the prejudice that Young ravens already (have to) leave their nest before they are fledged. However, the true raven parents usually continue to be around and look after them, just as they look after their little ones throughout the entire period from birth onwards - they take on tasks ranging from warming and feeding, to skin and feather care.₂ So, since ravens are very caring animals, we should eliminate this prejudiced expression from our language usage.

5. "Pulling the wool over someone's eyes".

Another expression with animals is to pull the wool over someone's eyes. This expression means that you cheat someone or are cheated by someone - and probably goes back to the craft of the furrier, which just pulled the fur over the head of a hunted fur animal, back. With regard to the many animals that are subjected to the brutal Fur industry we should remove it from our linguistic usage.

Pet-friendly alternative: pull someone over

This animal idiom goes back to the Yiddish word "seo" (translated "yardstick") and was re-phrased to "sow" in the course of time.₃ So pigs don't just get a little bit of Factory farmingbut also in our language.

Although they are extremely clean animals, they are popularly believed to be dirty and unkempt. Also "fat pig" and "stupid sow" are terms that everyone has probably heard before. At the same time, however the term "lucky pig" has become established in our language, which goes back to the fact that in the past one could consider oneself lucky to be able to call a pig one's property. Either way, we should also leave the animals verbally in peace.

Those who butter up others are trying to suck up in order to get something in particular. It is presumed that this animal expression goes back to the bear training. Indeed, the animals used to be rewarded with honey for successful exercises.₄ But as Vegan I do without honey, to protect bees. And also bears deserve something better than for the no longer contemporary circus with animals to be trained.

Pet-friendly alternative: flattering someone/sucking up to someone

The phrase has been around since the 19th century and means tackling a difficult challenge with courage and determination at its core. The Horns of the bull are his great strength - figuratively speaking, the problem is tackled at the most difficult point.₅ From an ethical point of view, we should generally just leave the animal alone - which is why we should rather switch to more animal-friendly alternatives in our everyday speech.

Pet-friendly alternative: get to the root of a problem

9. make mincemeat out of someone

Whoever wants to make mincemeat out of someone wants to inflict evil on someone and take revenge. So someone is threatened with violence, as it also flourishes millions of innocent animals in factory farming. But when Vegan I am against any form of violence - whether towards humans or non-human animals.

Pet-friendly alternative: Make kindling out of someone

If you have a bone to pick with someone, you want to take someone to task - for example, because you still owe them something. The saying goes back to the 1830s. There farmers usually removed the feathers from chickens in pairs and meanwhile had a lot of time to chat - time in which disputes developed or in which one could talk things out.₆ Did you know that also for eggs chickens die? Maybe we should just leave the animals in peace - even in verbal communication.

Pet-friendly alternative: still have a score to settle

More sayings and their vegan alternatives

Animal sayings are really a dime a dozen! The list could be continued indefinitely. Here you will find some more proverbs with animal involvement and their animal-friendly alternatives, which you can analyze or interpret:

Do you know any other sayings? Of course, there are countless other sayings and expressions, such as the "stupid cow". Feel free to leave me a comment with the animal sayings that are still missing here.

Now you have become acquainted with many, negatively-afflicted proverbs and idioms with animals and perhaps also developed a feeling for how pejorative they actually are. This becomes noticeable in any case, if you put yourself in the position of the animals.

The Speciesism is currently unfortunately a a fixed part of our linguistic usage - but that will not always be the case. This has been confirmed by researcher Shareena Hamzeh from Swansea University in Wales - as more and more people eat less meat or no meat at all, our language will also change over time.₇

Where do you stand on this? Do you think I'm making a mountain out of a molehill here or that I've shown a real eagle eye with this topic?

PS.: Can you Love animals but eat meat? In the linked article I have dealt with this contradiction in detail. Suitably to it I recommend to you also still the article about the Carnism - the psychology of eating meat. Have fun!

₅ Heike Münnich: Taking the Bull by the Horns, available at https://www.phraseo.de/phrase/den-stier-bei-den-hoernern-packen. [23.11.2021].

₆ Hamburger Abendblatt: Where does the saying that you have "a bone to pick" with someone come from? (As of May 30, 2013), available at https://www.abendblatt.de/ratgeber/wissen/article116640429/Woher-stammt-die-Redensart-dass-man-mit-jemandem-noch-ein-Huehnchen-zu-rupfen-hat.html. [23.11.2021].