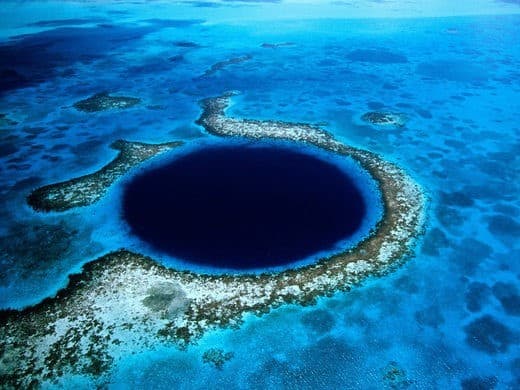 Maybe you are familiar with the Great Blue Hole of Belize you may have seen it in an advertising catalog or documentary. As the name suggests, the Great Blue Hole looks like a huge dark blue hole and is a naturally formed sinkhole off the coast of the Central American state of Belize. It is a fantastic sight from the air and a breathtaking paradise for divers from all over the world. In today's post, you'll learn how the Great Blue Hole came to be, why it's considered one of the most famous diver's paradises, and how you can explore it. extraordinary destination simply experience it in person.

The natural formation of the Great Blue Hole

From photos we know that this large, blue hole is round. The natural wonder has a diameter of 300 meters and reaches a depth of up to 125 meters. But how was the Great Blue Hole actually formed? Quite naturally. Over the years, limestone deposits have formed many individual caves. At that time, the caves were not yet under water. Only with the rise of the sea level the caves were flooded. Then, about 15,000 years ago, the Great Blue Hole formed due to a collapse of one of these caves. The natural shifting of the earth's plates had caused the cave to lose its stability. At a depth of about 90 meters, divers can now see a thermocline containing hydrogen sulfide. Therefore, at a depth of about 40 meters, stalactites of the former caves can still be seen today. Following a short video to dive once from the desk into the underwater world of the reef:

The Great Blue Hole is a UNESCO World Heritage Site

In 1996, this unusual hole became a monument of the country of Belize and at the same time a UNESCO World Heritage Site. However, due to our careless treatment of nature, the Great Blue Hole ended up on the list of endangered natural world heritage sites in 2009. Lighthouse Reef is the second largest coral reef on our planet and covers an area of about 200 square kilometers. Actually, Lighthouse Reef is called an atoll (ring-shaped reef), but the term is less common in our country. The reef has a breathtaking biological diversity. Besides about 500 fish and 80 different coral species, Lighthouse Reef is home to many endangered species of turtles and crocodiles. On the small islands, the species diversity of iguanas and other reptiles is particularly high. The underground cave system of Lighthouse Reef with the Great Blue Hole is one of the most popular diving spots on earth.

Experience the fantastic Lighthouse Reef for yourself

It is quite easy to get to this wonderful place as Belize City has an airport and is located right on the east coast. Travelers recommend traveling for about a week, participating in scheduled dives with Belize Liveaboards and Turneffe Resorts, and renting a car locally. I saw a video of a group of people doing a parachute jump over the reef. Of course, this is not for everyone, but should show that you can have many other experiences in Belize. Of course, the hotel should also be close to the reef to use the time in Belize as effectively as possible.

AirBnb as a friendly alternative

As an alternative to hotels, I would like to recommend AirBnb. Here you get an apartment or a room with people who live at the destination of your trip. I always stay with AirBnb hosts myself, because they know their way around the place and have experienced a lot themselves. For me, this is a fantastic and, above all, inexpensive added value. Here you come to AirBnb and you can just have a look for a great accommodation in Belize. More important facts and information about Belize and the Lighthouse Reef with the wonderful Great Blue Hole:

The Great Blue Hole is worth the trip!

PS.: Look also at my personal Travel tips on the blog and get to know really cool travel destinations! Have fun!