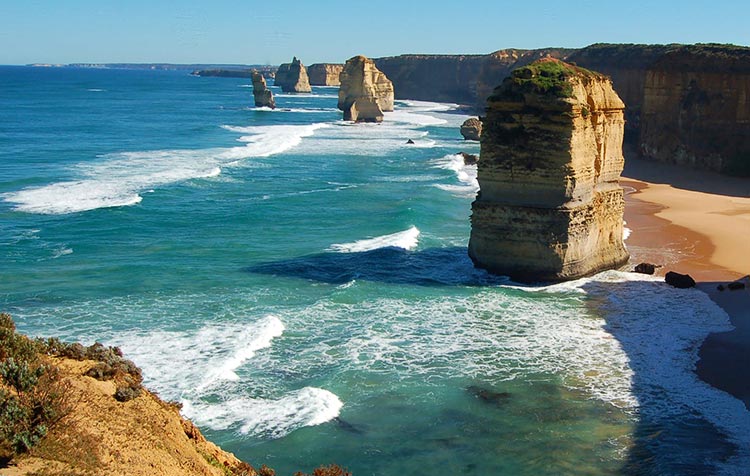 12 Apostles in Australia on the Great Ocean Road

Do you already know the 12 Apostles in Australia? Seeing this unique rock formation on the Great Ocean Road before your own eyes is simply a wonderful nature experience.

No, this is not about Peter, John, James, Judas, and the rest of the apostles, or disciples of Jesus.

With these 12 Apostles is not about the disciples of Jesus, but about the rock formations off the Australian coast. Even though a certain parallel regarding divine appearance cannot be denied. Truly sublime, monumental and incredibly impressive is the sight of these up to 60m high limestone columns on the rugged coast of Australia between Princetown and Port Campbell.

So if you are preparing your trip to Australia, you will find in this article of the Nature travel blogs one of the absolute must-see highlights that the distant continent has to offer.

On the road on the Great Ocean Road

The 12 Apostles in Australia represent one of the highlights along this route and are the destination and main attraction of most tours and excursions in this region.

After you apply for your visa for Australia without stress you should definitely book the tour along the Great Ocean Road as one of your travel destinations in Australia - either as a guided excursion or explore it on your own. The beautiful landscapes will remain in your memory and photos for a long time and you will certainly not regret this tour.

Interesting facts about the 12 apostles

Although the 12 apostles in Australia are not the only attraction along the Great Ocean Road, they are certainly the highlight amidst many other natural phenomena that present themselves to you in this coastal region.

Reason enough for a separate article, in my opinion. And also reason enough to gather a few facts.

Originally, the limestone columns were part of the mainland about 15 million years ago, and then due to progressive erosion and the action of wind and water, they became more and more isolated until the current columns, completely separated from the coastal strip, were formed.

Thereby are also Parts of the formations collapsedThe last time this happened was in 2005, and so there are actually no longer 12 apostles, but currently only eight.

Curiously, strictly speaking, there were never actually 12 apostles, because this current designation - by the way, not only the name for the rock formations, but also for the marine national park in which the rocks are located - came only in the 50s. At that time, however, there were already only nine rocks rising from the water.

Before that time the rocks were known as "The Sow and Pigs", which translates as "The sow and the pigs".

Pictures and nice spots at the 12 Apostles in Australia

The so-called postcard motifs, as they are known from the 12 Apostles in Australia known, are photographed mainly from the upper coastal strip.

Here you simply have the best overview, and of course you can only shoot a panorama from here that includes all 12 - pardon, eight - apostles.

There is also an official viewing platform, as well as the so-called Apostle LockoutA hiking trail on the cliff directly above the rocks. Along this path you can photograph the 12 apostles from different perspectives.

At the same time, each exposure of the 12 Apostles has an individual charm that is worth capturing.

Another possibility to take pictures worth seeing is the perspective from below, i.e. from the beach. Only from this perspective it becomes really obvious how huge the 12 apostles actually are.

You can reach the beach via paved stairs from the coast. The steep path down the cliffs is called "Gibson Steps".

The 12 Apostles in Australia - worth the trip!

The 12 Apostles in Australia are located on the southeast coast in the Australian state of Victoria. From Melbourne as starting point, they can be reached by car or bus in about 4 hours. Tours are usually offered as a full-day tour or multi-day tour in conjunction with other attractions on the Great Ocean Road.

Have fun and have a good trip,

PS.: Here at CareElite you will find a Travel checklistYou can use them to make sure you don't forget anything on your trip to Australia. Agness Whalewinder is the co-founder of the popular adventure travel blog eTramping and the fitness website Run Agness Run. She has been traveling for nine years while working as a digital nomad and online entrepreneur. Originally from Poland, she holds a Master Degree in New Media from Amsterdam University, studied English and Spanish for four years at the University of Wolverhampton, and has currently traveled to 65 countries and counting.