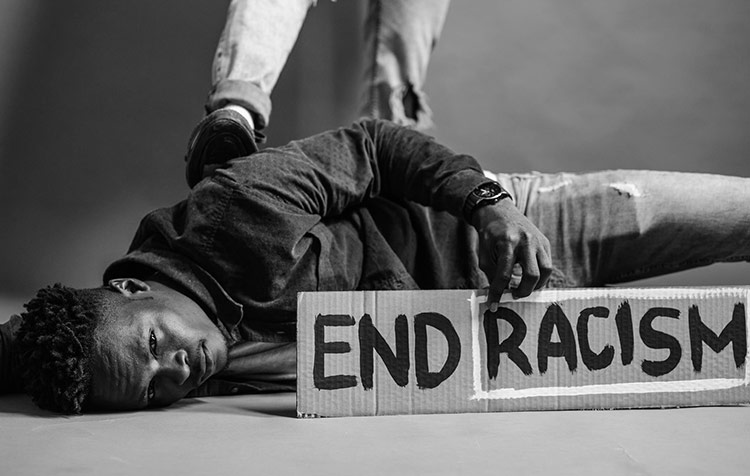 You want to fight racism and stand up against injustices like xenophobia? Then you've come to the right place!

I hate injustice! And on closer inspection, the very words "xenophobia," "xenophobia," and "xenophobia" as synonyms for racism are unfair because they suggest that anyone who doesn't look "typically German" is foreign. As White I can only imagine how hard it must be to be discriminated against on the basis of one's own skin color, origin or religion and to be disadvantaged or even excluded in everyday situations. But just knowing that racism is omnipresent is enough for me not to simply accept this injustice without doing anything.

In this article, I would like to give you ten valuable tips against racism. Learn below what you can do personally to stop discrimination based on different biological characteristics in our society. Because silence neither helps nor protects. Let's go!

Notice: I speak in this article only of White and People of Colorto clarify the respective political position.

1. inform yourself about racism

We don't need to discuss whether racism exists at all. It has been part of our society forever. Racism is not always malicious. Racism is also not automatically right-wing radicalism - racist thinking and acting does not always happen consciously - and therefore the topic really concerns everyone.

Everyday Racism is, for example, when people ask you where you come from because of your appearance or speak to you in English even though German is your native language. When someone thinks you are a thief just because you look different - or when you are simply not noticed by others because you look different. Xenophobia on the other hand, is genuine and often directly expressed hatred against people from a particular region, people or culture. Everyday racism often happens unintentionally - xenophobia does not.

How and where do I get the best information?

Racism arises from ignorance and prejudice. Read blogs and books by people affected, such as "What white people don't want to hear about racism - but should know" by Alice Hasters. (you get here*)

Look at Documentations on, for example, via the "Black Lives Matter" Movement.

Read also important Studies on racism in your country - for example "Racist Realities" from the National Discrimination and Racism Monitor (NaDiRa)., a study conducted by the German Center for Integration and Migration Research is created. Here are some facts from it:

These are frightening, but also encouraging statistics. With this knowledge and the aforementioned sources of information, it is much easier to put oneself in the position of the victims, to recognize racist thinking and actions more quickly and, last but not least, to combat them in a more targeted manner.

2. listen to those affected

If you are not personally and regularly confronted with racist remarks, how will you really - I mean with absolute certainty - be able to judge what racism feels like? If you want to learn more about racist actions and fight racism, you should talk to People of Color more often, listen to them, and acknowledge their experiences of racism. It's really extremely painful for many people of color to even deal with racism on their own person - but it's the only way to truly overcome it.

As White you usually don't have a clue about what racism really means - by listening you can only learn - and by learning you can help stop racism in our society.

Because racism perpetuates unjust power relations. Whether you like it or not - as white Man often benefits one in everyday situations just because of the color of their skin. For example, at school, at job interviews, at court hearings, when looking for an apartment or during police checks.

"White people can wake up every day and choose to confront racism. I can't."

David, student from Hamburg (with aware)

We enjoy a real privilege there, often unconsciously. It is important to recognize and understand thatinstead of ignoring facts or even throwing around racist slogans like "If you want to find work, you'll find work".

4. call racism by its name instead of remaining silent

What else can you do against racism? Name it directly when you observe it. By remaining silent, it is silently, secretly accepted and socially normalized. Make it visible, but stay factual and don't switch to attack. When asked about their everyday racism, many people react very aggrieved because they have behaved in a racist way rather unconsciously and unknowingly. But now they know - and are sensitized.

Example: "Pass me the skin color pen" - an everyday racist request that suggests that there is only ONE skin color. But people have different skin colors. Therefore, simply ask the question "Which skin color?

5. make yourself strong for those affected

You see someone being discriminated against, excluded or insulted because of their skin color or other biological characteristics? Whether online or offline - take a stand, get involved and show solidarity with the victims! Racist slogans or actions must not be accepted. Supported victims to file charges if the cases arise and hold the perpetrators accountable. Offer yourself as a witness. Intervene instead of looking the other way - because looking the other way is precisely the reason why racist patterns of thought and action can spread in the first place.

Fortunately, there are countless public institutions, organizations, associations, projects and (private) initiativeswho work against racist discrimination and violence on a daily basis. Here, too, you can actively support the educational work with a financial donation or, for example, on the weekends.

7. pay attention to your language

An adapted choice of words may not change any social conditions, but it prevents existing racism from constantly reproducing itself. In addition, a substantive confrontation with one's own (possibly racist) language takes place, which can initiate real change.

However, it is not enough to simply stop saying the "N-word" or to stop using expressions with negative connotations. Rather, it is a matter of adapting racist thought patterns - namely, that the differences between White and People of Color are so great that one would have to distinguish between them. However, there is no biological basis for dividing people into different races. Those who think in racist terms act arbitrarily and unscientifically. We should all take that to heart in our choice of words.

Racism is a social injustice that we all need to speak out against. There are countless well-organized anti-racism demonstrations that you can participate in, to show attitude and to fight racism. For example in Berlin, Munich, Hamburg, Cologne and countless other German cities. If you want diversity, you have to get involved and be loud!

Petitions are a wonderful way to Triggering change in our society. By signing, sharing or even initiating a petition against a (racist) grievance, you can make a real difference.

For example, advocate for anti-racism to be added to the school curriculum - or for an obviously racist board member of a major corporation to resign. As long as many people share your views and desires, nothing is really impossible.

Tip: How to make your own start a successful online petitionYou can find out more in the linked article!

10. don't speak for others, but support them

As White you just can never fully comprehend how brutal it must feel to be racially insulted. For example, I once felt discriminated against on a trip to India because I was stared at and patted down because of my light skin color or my appearance. But such moments are usually positive attention, because white people are often seen as wealthier and more attractive.

With positive racism, the attributes are positive and higher-ranking - this can be endured because one is not attacked or disadvantaged. Negative racism however, is when the attributes are more negative and lowered. For example, one is insulted, excluded or oppressed because of one's skin color. Whites are usually not victims of this form of racism. And certainly not permanently and regularly.

Therefore, one should not speak for those affected by negative racism, but still show attitude and support them. In this article, for example, I do not speak for others - but I have listened and pass on the findings, to combat racism.

Fight racism and do not be silent!

Protection against discrimination is a Human right, compliance with which Basic prerequisite for a democratic discourse is - people must not be excluded because of their origin or faith.

If we want to stop racism, we cannot look away. To successfully fight this injustice in our society, we must listen, question and adapt our own behavior, Advocate change, raise our voices and stand up against this brutal form of discrimination.

I hope I was able to clarify for you what racism means and how we could end it as a global whole society. Do you have any questions, tips or your own experiences with racism that you would like to share? If so, I'm eager to hear your comments.

PS.: Did you know that you can also get through Veganism human rights promote? In the linked article, I explain why you will do even more for other people if you stop consuming animal products.